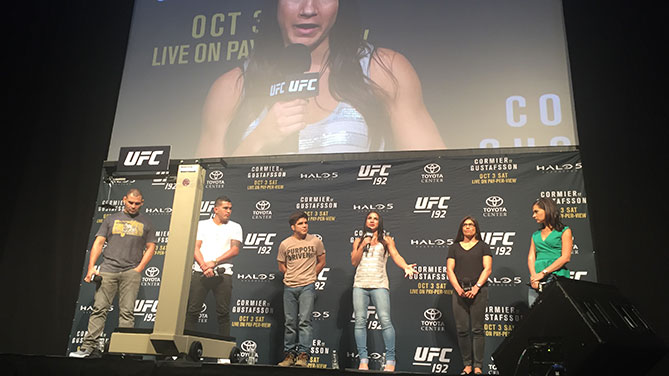 Cain Velasquez may not hold the UFC heavyweight championship belt anymore, but that has not dampened his appeal among fans who showed up to the UFC 192 Q&A at Toyota Center in Houston Friday, or the influence he has on his fellow fighters, four of whom joined him on stage as the promotion celebrated Hispanic Heritage Month.

“We think of Oscar De La Hoya, we think of Julio Cesar Chavez, but for me in MMA, I think of Cain Velasquez,” flyweight contender Henry Cejudo said. “He's paved the road for us, and he's someone that I look up to.”

Former UFC lightweight champion Anthony Pettis also cited the two-time heavyweight boss as an influence while also noting that for Hispanic fighters, their vocation isn’t so much as a choice, but something they were destined to do.

“It's in our blood,” he said. “There are great champs in boxing and all these combative sports that have Hispanic blood in them, so for me, it's in my blood and we were born to do this.”

Also on stage with the aforementioned trio were two of the ladies representing the Hispanic community in the Octagon, American Top Team squadmates Tecia Torres and Jessica Aguilar, both of whom take their heritage very seriously.

“Being a part of the UFC and part of Hispanic Heritage Month is a big thing to me,” Aguilar, a Houston native of Mexican descent, said. “I'm very proud of my heritage and I get to do what I love. I'm just an athlete like all these other athletes here and I fight with great pride and joy.”

“As a female fighter and a Latina, for me, it's a platform to show the world that women can be beautiful, can be strong, and we can empower others to not necessarily fight, but to defend themselves and also to be a woman in the sport today,” Torres, who is of Puerto Rican descent, said. “Oftentimes, especially in the Spanish community, there's the whole stigmatism of machismo and they think that women shouldn't be fighting, but when they see us girls out there doing what we love to do and we actually do have talent, it spreads the love within all parts of the world.”

A common bond among all those on stage was that life wasn’t necessarily easy for their parents, with many of the fighters forced to grow up in single parent homes. Yet watching those parents persevere showed them the value of hard work and determination.

“They didn't complain, they went out there and did their job, and they were happy,” Velasquez said of his parents, and after noting the several homes the family had to live in over the years, the Californian was proud to say that he was eventually able to buy his parents a house of their own after he sailed to the top of the mixed martial arts world.

Pettis, whose father was murdered in a break-in back in 2003, was able to do the same thing for his mother, buying her a house and car last December.

“My mom raised three boys by herself,” he said. “She's the rock of our family.”

Cejudo, Torres and Aguilar shared similar stories of being raised by strong mothers who worked tirelessly to feed their children and keep a roof over their heads, and of being able to give back to them now that they’re making their way in the UFC.

And while there were the usual fun and games during the Q&A, with Velasquez asked how he would fare against Houston Texans defensive end JJ Watt in the Octagon (“one round”), Pettis saying Nate Diaz is the one fighter he would least like to spend 24 hours in a room with, and the fighters choosing Canelo Alvarez to beat Miguel Cotto in their November boxing match by a vote of 4-1, the big takeaway may have been the perfect quote for what all these fighters have done thus far in the sport:

“Dream big,” Cejudo said, “sacrifice all, you will achieve victory.”