Tickets for international fans will be available to fans outside through Japanese ticket vendor Boardwalk Inc. 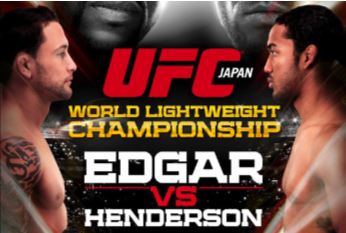 UFC Japan – or UFC 144 – will also feature the return to Land of the Rising Sun of  Quinton “Rampage” Jackson, one of the biggest stars in the sport, in a bout which will mark the 6th anniversary to the day of his last fight in Japan.  Jackson faces rising star Ryan Bader, whose most recent win came just two weeks ago at UFC 139 in San Jose.  Other key matchups feature Mark Hunt, a veteran of Japanese kickboxing, versus French heavyweight contender Cheick Kongo; and Japanese superstar Yoshihiro Akiyama dropping a weight division to meet the always dangerous Jake Shields at welterweight.  Rounding out the main card will be a lightweight bout pitting the underrated Joe Lauzon, coming off a stunning 67-second submission over Melvin Guillard, against former WEC champion Anthony Pettis.

“Japan is the spiritual home of martial arts – the world has learned from the Japanese many aspects of how to compete in hand-to-hand combat with respect and honor,” said Fertitta.  “But Japan also has a proud history of modern mixed martial arts and I am excited to bring the Ultimate Fighting Championship back here, and to begin the build-up today to one of the most highly anticipated events of the year -- not just for Japanese UFC fans, but for sports fans all over the world.”

“To mark this historic occasion of UFC’s return to Japan and Zuffa’s first event in Asia, we are bringing a truly stacked card, topped with a World Championship title bout,” noted UFC Asia Managing Director Mark Fischer.  “Frankie Edgar is one of the top pound-for-pound and toughest guys in the sport, and Benson Henderson is a former WEC champion who earned his title shot with three consecutive wins including most recently over Clay Guida in one of the best fights of 2011”

Tickets for UFC® JAPAN: EDGAR vs. HENDERSON will be made available via pre-sale channels in Japan on November 28 and are priced at Japanese Yen (JPY) 100,000, 34000, 19000 9800, and 5800.  General availability begins December 10 in numerous outlets including Kyodo Promotion, E-Plus and Lawson Tickets.

UFC® fans in Japan will have the opportunity to purchase pre-sale tickets to this event starting today through UFC Mobile, and tomorrow through WOWOW and Nikkan Sports.

UFC® JAPAN: EDGAR vs. HENDERSON will be available live in the United States on Pay-Per-View at 10 p.m. ET/7 p.m. PT for a suggested retail price of $44.99 US for Standard Definition and $54.99 US for High Definition.