UFC Inducts the Hall of Fame Class of 2015 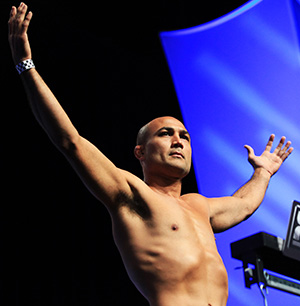 Now including sections for pioneers, contributors, modern era competitors and classic fights, MC Jon Anik ushered in this new era for the Hall of Fame with video presentations, introductions from key figures in each inductee’s career, as well as speeches from the inductees themselves.

Contributor wing inductee Jeff Blatnick was enshrined posthumously, as he passed away in 2012, but good friend Nick Lembo of the New Jersey State Athletic Commission introduced the Olympic Gold medalist who popularized the phrase “mixed martial arts” and helped keep the sport alive during the dark ages, playing a key role in the drafting of the unified rules that govern the UFC today.

“He never boasted about the role he played in the sport’s development,” Lembo said. “The world would be a better place if everyone carried themselves As Jeff Blatnick did, with integrity, honor, sturdy persistence, and sheer will.”

Blatnick’s wife Lori accepted the induction on behalf of her husband.

“Although he probably wouldn’t have said it, I know he would have been very proud today,” Mrs Blatnick said. “Jeff played a key role in making sure this sport survived.”

One of the athletes whose fights Blatnick called from the commentator’s booth was Bas Rutten, a former UFC heavyweight champion who may have only competed twice in the Octagon, but whose contributions to the sport as a King of Pancrase and later as a commentator and ambassador for MMA was – and is – immense.

“I honestly didn’t think I was going to be inducted into the UFC Hall of Fame because I only had two fights, and all my big wins came in Japan, and that this honor would never be mine,” Rutten said. “But for the UFC to recognize me for what I did in fighting, that really means the world to me.”

Rutten, introduced by his Inside MMA co-host Kenny Rice, has always been one of the most respected and beloved fighters in the game. A lot of that has to do with his gregarious personality, something which Rice noted, saying “Knowing and working with Bas Rutten is always an adventure. Most of us like to think that we think outside the box. Bas doesn’t do that. He created his own.”

It wasn’t always smiles and jokes from “El Guapo” though, as he dealt with asthma and eczema as a child, with bullying following in fast pursuit until he discovered martial arts.

“I became a fighter because I couldn’t stand to be bullied around anymore,” Rutten said. “I couldn’t stand those cowards. But I saw this movie, Bruce Lee in Enter the Dragon, and that changed everything. Martial arts transformed me.

“So how would I like to be remembered?” he asked. “As a guy who was there for his family and his friends. The guy who didn’t walk over others to get where he wanted, who holds the door open for the person behind him. Just a decent guy. And a guy who could kick ass and tell some crazy bar fight stories.”

Rutten was always expected to bring laughs and good vibes to the proceedings, but if you would have told someone at UFC 52 in 2005 that Matt Hughes and Frank Trigg would be cracking jokes as buddies ten years after their rematch, they wouldn’t believe it. But there they were as their bout was the first inductee into the Hall’s Fight wing.

“I asked Frank if I could carry him out here on my shoulder; He said no,” Hughes laughed, referring to the epic slam that kicked off his return from almost certain defeat against Trigg in their UFC welterweight championship bout to win via rear naked choke in the first round.

“It was one of the greatest comebacks I had ever seen in sports,” fellow Hall of Famer Pat Miletich, who introduced the pair, said. After a video package played, Trigg said, “That’s the most of our fight I’ve watched, ever. It’s one of those fights I could never watch. It was a soul stealer for me.”

Time has healed some of those wounds though, especially with this Hall of Fame nod.

“This is probably one of the most emotional times I’ve been because of this fight,” Trigg said. “It was the most epic battle I’ve ever been a part of.”

Hughes, in the Hall of Fame for his career accomplishments and for the Trigg fight, returned to the stage to induct another rival, former two-division world champion BJ Penn.

“We can be honest with each other,” Hughes joked. “The only reason I’m here is because BJ Penn kicked my ass in the first round twice. BJ and I were rivals in the Octagon, but it was in the last five years that we’ve become very close friends. Good friends or not, if I had won that rubber match back at UFC 123, you can bet your ass you’d be listening to Diego Sanchez right now.”

Penn, one of the most popular fighters in UFC history and a fearless competitor, didn’t even expect to be talking about MMA in 2015, let alone be in the Hall of Fame.

“I never thought I would be involved in fighting or the UFC in 2015,” the Hawaiian icon said. “All I wanted to do was become the lightweight champion, beat Jens Pulver and retire and live a normal life. I wanted to come in, win the belt, and walk away.”

That didn’t happen. What did happen was a legendary career.

“He (Penn) came into this sport to become a legend, and nothing less was acceptable to him. Well, BJ, mission accomplished.”