Tickets For UFC Paris Go On General Sale Friday, June 24. Register Your Interest At UFC.com/Paris
May. 18, 2022

UFC President Dana White said “We’ve been working on getting into France for nearly a decade and WE’RE COMING!!! I’m so excited to hold our first event in Paris this September. It will be an unbelievable night of fights and an epic historic event for the athletes and fans.” 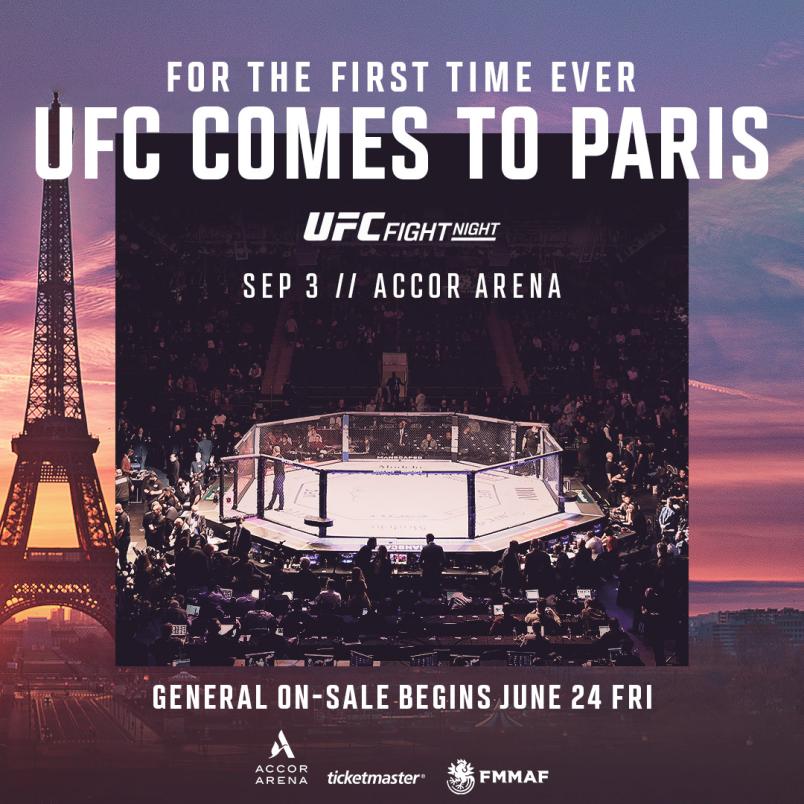 Fans are advised to register their interest for the event early via UFC.com/Paris to secure their tickets in advance.  Tickets for this monumental event will go on general sale on Friday, June 24, via Accor Arena and Ticketmaster. Fight Club members will have the opportunity to purchase tickets on Wednesday, June 22, whilst those who registered their interest early will gain access on Thursday, June 23.

VIP tickets will be available via On Location, the UFC’s official VIP experience provider. Fans can enjoy exclusive access with an official ticket package that features premium seating, VIP access to weigh-ins, exclusive pre-fight hospitality, UFC Fighter meet and greets and more.  Full package details can be found on UFCVIP.com.

UFC’s debut in France marks the culmination of a decade-long effort by UFC to obtain official recognition of mixed martial arts by French authorities and to integrate MMA into the broader French sports ecosystem. Following formal recognition of MMA by the French Ministry of Sport in early 2020, the French Broadcast Authority (ARCOM) authorized the broadcast of MMA events in France and the National Gaming Authority (ANJ) began allowing betting operators in France to offer wagering on UFC bouts. In the coming months, UFC will continue to work closely with the French Boxing Federation and the French Mixed Martial Arts Federation to promote the positive impact of MMA as a sport.

The UFC has grown exponentially in popularity in France in recent years, despite never holding an event in market.  There are an estimated 3.8m UFC fans in France, and it remains the second largest country in Europe on UFC social platforms, exemplifying the demand for the sport.

French fans have been treated to exhilarating performances from homegrown talent in recent years. Ciryl Gane put on a dynamic display earlier this year as he became the first French-born athlete to fight for the UFC heavyweight title, only three years into his MMA career, against his former teammate Francis Ngannou.

Nice's own Manon Fiorot has gone from strength to strength since joining UFC, with dominant wins in the flyweight division, most recently defeating Jennifer Maia at UFC FIGHT NIGHT: BLAYDES vs DAUKAUS. French fighters Nassourdine Imavov and Benoit Saint-Denis have also put on performances to remember since joining UFC's roster.

Fans are encouraged to follow @UFC, @UFCEurope and @UFCFRA for all the latest UFC updates.