Performance Of The Year

"Thug" Rose Namajunas has the knack for the spectacular when it comes to capturing the strawweight title. In Jacksonville, Florida, she reminded everyone in the world she is the best with a first-round, head kick knockout of Zhang Weili that made her a two-time UFC champion.

In the lead-up to Kamaru Usman's second fight against Jorge Masvidal, the welterweight champion continued to say he wanted to satisfy his competitive appetite, something he couldn't accomplish in their first fight at UFC 251.

Well, "The Nigerian Nightmare" went on to show the world what satisfaction looked like in emphatic fashion as he delivered the Knockout of the Year with an earth-shattering right hand that sent Masvidal crumbling to the canvas. It was a definitive end to their feud and provided Usman the signature moment in a banner year.

If Brandon Moreno's first fight against Devieison Figueiredo was marked by its late entry for one of the best fights of 2020, the rematch was marked by his dominance of the then-flyweight champion. In Phoenix, Moreno took it to Figueiredo, utilizing his ultraslick boxing and smooth grappling to snuff out any sort of momentum before Figueiredo could begin to build it.

When Moreno finally ended the fight with a submission, he almost looked stunned inside the Octagon, like he didn't believe he actually just became a champion. The moment finally hit Moreno, though, and he delivered one of the most iconic moments of the year.

Quite simply one of the most stunning upsets in UFC history, Julianna Peña did exactly what she told everyone she would do to Amanda Nunes at UFC 269. "The Venezuelan Vixen" got into the champion's face and pushed the pace, and once Nunes started to fade, Peña seized her moment and latched onto her neck. The champion tapped, and Peña ended a 5-year undefeated streak for the woman many consider to be the GOAT of women's MMA and one of the most dominant champions in the sport overall. It was a gigantic reminder that nothing in mixed martial arts is a sure thing, and instantly became a "where were you when...?" moment in the sport's history.

Although Charles Oliveira earned the lightweight title with a mind-blowing comeback win over Michael Chandler in May 2021, some felt the status wasn't validated until "Do Bronx" took on Dustin Poirier, who spent the majority of 2021 tied up in a pair of fights against Conor McGregor. Because Poirier bested the Irishman twice, his already-large fanbase had grown immensely, and the build-up to UFC 269's main event had shades of a coronation for "The Diamond." However, Oliveira carried himself like a champion the entire time, including in the Octagon. After a high-paced and even first round, Oliveira reminded everyone he was the champ, and snatched a record-resetting submission in the third round to earn his first title defense.

Fight Of The Year 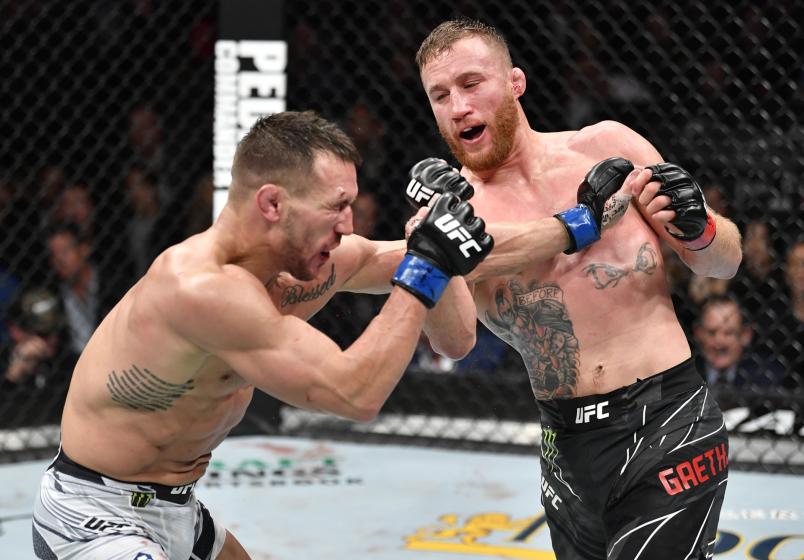 All anyone wanted from a fight between Justin Gaethje and Michael Chandler was a war "for as long as it lasted," and somehow, despite the result requiring judges for determination, the two lightweight contenders exceeded expectations in Madison Square Garden. For 15 minutes, Gaethje and Chandler delivered a back-and-forth, tension-filled stunner of a fight. It wasn't a sloppy brawl, either. The two showed excellence on the feet, throwing calculated bombs at one another and taking them in stride. A few grappling scrambles were sprinkled in, and the two former college wrestlers flashed their prowess on the mat as well. In the end, Gaethje earned the nod, but both men earned everyone's respect for a fight nobody will forget for a long time.

A good chunk of the narrative leading up in the extended buildup to the fight between Max Holloway and Yair Rodriguez was about question marks. For one, Holloway didn't necessarily need to take the fight in some people's eyes as he'd already earned a third crack at Alexander Volkanovski with his dominant performance against Calvin Kattar to open 2021. On Rodriguez's end, the Mexican contender hadn't fought since 2019, so more than a few people wondered what he had to offer against the former champion. All those things were put to rest the moment the two started throwing hands, however, and a matchup that carried plenty of potential delivered in highly entertaining fashion. For five rounds, Holloway and Rodriguez stood toe-to-toe and fired their best at one another, and in the end, "Blessed" picked up another win to bolster his resume for another chance to regain his throne.

Nothing builds tension between opponents quite like coaching against one another on The Ultimate Fighter, and Alexander Volkanovski and Brian Ortega are no exception. After the two got on each other's nerves in the show's return, they got to settle all grievances at UFC 266 in Las Vegas and just so happen to deliver one of the best featherweight title fights in recent memory. The biggest highlight came in the third round when Ortega snatched a mounted guillotine that even had the champion wondering if he was about to lose his title. Somehow, though, Volkanovski refused to tap. Moments later, however, Ortega flipped up his signature triangle choke, and once again, Volkanovski pulled off an escape with vengeance. "The Great" nearly put Ortega away to end the third round, but "T-City" showed his heart and fought until the end of the fifth round. In the end, the score was settled and respect was earned, and Volkanovski seemed to have gained everyone's acknowledgement as the best featherweight in the world for at least one night.

Not many people were pounding down the doors to fight Jiri Prochazka, the Czech contender who scored a big-time knockout over Volkan Oezdemir when he made his UFC debut in 2020. Dominick Reyes, however, needed a win in the worst way, and "The Devastator" entered the main event rejuvenated and highly motivated to right the ship after nearly capturing the light heavyweight title in 2020. The 205ers traded heavy and often in their main event, each man hurting the other with their best shots. Prochazka delivered the final word with an amazing spinning elbow that sent Reyes crashing to the mat in the third round. It was a finish equal parts eerie and marvelous, and it earned Prochazka a spot at the front of the title-shot line.

A couple of unconventional factors led to a matchup between Petr Yan and Cory Sandhagen many felt was coming anyway after Sandhagen scored a clean, flying knee knockout over Frankie Edgar in February 2021. At the time, Yan was the champion ready to defend his title for the first time against Sterling. However, an illegal knee forced Yan to surrender the belt, and a rematch was slated for later in the year. Sterling had to pull out of the fight more than a month from the scheduled date due to injury. Sandhagen, despite coming off a razor-close loss to T.J. Dillashaw, was granted the interim title shot against Yan as Dillashaw was not healthy enough to step in on short-notice.

After all that, the two bantamweights put on a striking clinic for five rounds in Abu Dhabi. Sandhagen came out furiously in the first round putting on display the volume and diversity that have many so excited about him. As the fight grew, Yan built as well, making the right adjustments to sway the momentum fully in his favor. "No Mercy" eventually got the judges' nod and solidified an eventual rematch with Sterling that will unify the bantamweight title at some point soon.