*PRESS CONFERENCE IN HOUSTON THIS TUESDAY OPEN TO PUBLIC AT 1 P.M. CT*

Las Vegas, NV (USA) – The wait for the much-anticipated third fight between UFC® lightweight champion Frankie Edgar and unbeaten top contender Gray Maynard is finally over. The Ultimate Fighting Championship® announced today that Edgar and Maynard will settle the score when the organization returns to the Toyota Center in Houston, Texas on Saturday, Oct. 8. If one major title fight wasn’t enough, UFC officials also confirmed that UFC featherweight champion Jose Aldo will defend his crown against the always-dangerous Kenny Florian. 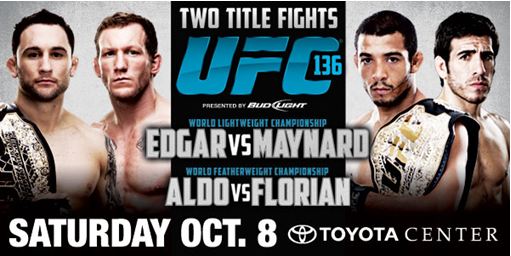 All four competitors will take part in a press conference this Tuesday, Aug. 16 at 1 p.m. CT at the Toyota Center in Houston. The conference, which will be hosted by UFC President Dana White, is open to the public and will be held in the 1994-1995 Championship Rooms.

“Frankie and Gray had a Fight of the Year candidate the last time they met and I expect nothing different this time around in Houston,” UFC President Dana White said. “Both guys truly believe they won the last fight and the wait for their third fight is over. On Oct. 8, neither of these guys plans on leaving it to the judges.

“Aldo’s been running through guys at 145-pounds, but Florian is the most experienced guy he’s ever fought,” White continued. “Kenny looked really sharp against Diego Nunes in his last fight and Diego is a guy who trains with Aldo. I think Kenny is out to prove that he can get over the hump and win his first UFC world title.”

In addition to the two world title fights, former number one middleweight contender Chael Sonnen hopes to spark another run at the belt when he locks horns with the heavy-handed Brian Stann, while heavyweights Dave Herman and Mike Russow are set to collide. Plus, a pivotal lightweight bout pits Melvin Guillard against submission ace Joe Lauzon.

UFC® Fight Club™ members will have the opportunity to purchase tickets to this event Wednesday, Aug. 17 at 10 a.m CT via the website www.ufcfightclub.com. A special Internet ticket pre-sale will be available to UFC newsletter subscribers Thursday, Aug. 18, starting at 10 a.m. CT. To access this presale, users must register for the UFC newsletter in the field at the top of this page.

UFC® 136: EDGAR vs. MAYNARD 3 will coincide with the UFC® Fan Expo, which takes place Friday, Oct. 7 and Saturday, Oct. 8 at the George R. Brown Convention Center in Houston. Fans won’t want to miss this chance to participate in the ultimate fan experience, including special events, interactive Q&A sessions, meet & greets with top UFC fighters, Training & Development sessions and much more. Tickets and VIP packages are on sale NOW at www.ufcfanexpo.com

A tremendous boxer with great takedowns and poise, UFC lightweight champion Frankie Edgar (fighting out of Toms River, N.J.) earned back-to-back wins over the legendary BJ Penn in 2010 before battling to an epic draw with Maynard in January. The 29-year-old heads to Houston with the sole mission of defending the title and upending the only man to ever defeat him.

“In reality, this fight is everything to me,” Edgar, 13-1-1, said. “This is everything I worked for and this is a defining fight in my career. I want to end this chapter with Gray on a positive note. I expect more fireworks in this third fight based on how both Gray and I fight. I’ve been training really hard and I expect to come out on top.”

Since joining the UFC in 2007, Gray Maynard (fighting out of Las Vegas, Nev.) has proven to be one of the most dominant contenders in the lightweight division. Holder of wins over the likes of Jim Miller, Roger Huerta and Kenny Florian, the 32-year-old former collegiate wrestling standout at Michigan State has vowed to leave Houston with the title he rightfully believes is his.

“I’m always expecting 110 percent from Frank Edgar,” Maynard, 11-0-1, 1NC, said. “That’s why I’m gonna be more prepared and determined than ever before. I thought I won the last fight. This time, there won’t be any doubt in the judges’ minds or the rest of the world that I’m the UFC lightweight champion. This fight means everything to me and I’m going to prove it on Oct. 8th in Houston, Texas.”

Recognized by many as one of the sport’s top three pound-for-pound best, UFC featherweight champion Jose Aldo (fighting out of Rio de Janeiro, Brazil) has torn through the likes of Urijah Faber, Manny Gamburyan and Mark Hominick in recent outings. With his devastating display of striking and knockout power, the 24-year-old titleholder may face the toughest test of his young career when he faces Florian in Texas. It’s a fact that has the once-beaten fighter as motivated as ever.

“Kenny Florian is a tough fighter with experience in many weight classes,” Aldo, 19-1, said. “This is an exciting fight for the fans and will show why the featherweight division is one of the toughest in the UFC.”

Fresh off a win over Diego Nunes in his featherweight debut in June, fan favorite Kenny Florian (fighting out of Boston, Mass.) now has his sights set on claiming his first world title. A gifted submission artist with underrated striking, the 35-year-old “Ken-Flo” believes he’s found a home at 145-pounds – a home he plans on ruling for a long time.

“Being at 145 pounds, I feel like I’m one of the better, stronger athletes in the division,” Florian, 16-5, said. “Jose Aldo is the most dangerous opponent I’ve ever faced, but I’ve never felt more prepared. Most people are intimidated by Jose, but I plan on bringing the fight to him. I expect this to be a really exciting fight that ends in me realizing my dreams of becoming a world champion.”

One of the best middleweight matchups of the year pits contenders Chael Sonnen (fighting out of West Linn, Ore.) and Brian Stann (fighting out of Scranton, Pa.) against one another. After nearly defeating champion Anderson Silva last Aug., the 34-year-old Sonnen (26-10-1) wants nothing more than another shot at “The Spider.” Getting there might prove to be a treacherous path, as in his way stands “All-American” Stann (11-3), who is coming off back-to-back knockout victories over Jorge Santiago and Chris Leben.

A potential heavyweight slugfest is scheduled for Oct. 8 as Dave Herman (fighting out of Temecula, Calif.) meets Mike Russow (fighting out of Chicago, Ill.). Nicknamed “Pee Wee,” the 26-year-old Herman (21-2) has proved to be no joke in the Octagon, knocking out John Olav Einemo in his UFC debut in June. He’ll face another heavyweight on the rise at Toyota Center in Russow (14-1, 1NC), a winner of three straight, including consecutive KOs of Todd Duffee and Jon Madsen.

Believing one more win will earn him a coveted lightweight title shot, Melvin Guillard (fighting out of New Orleans, La.) looks to extend his winning streak to six when he meets submission ace Joe Lauzon (fighting out of East Bridgewater, Mass.). Nicknamed “The Young Assassin,” Guillard (46-9-3, 1NC), 28, is riding consecutive knockout victories over Evan Dunham and Shane Roller. However, his road to gold is paved with a serious potential roadblock in 27-year-old Lauzon (20-6), who is fresh off an outstanding submission over Curt Warburton in June.