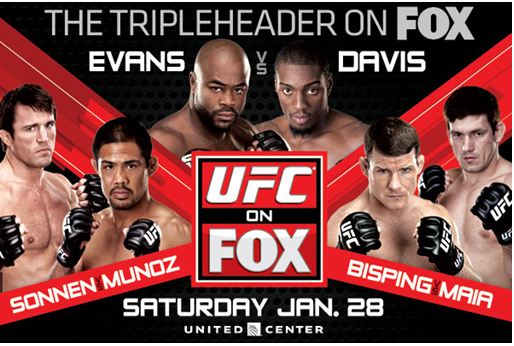 Plus, in the night’s co-main event, controversial middleweight contender Chael Sonnen battles the red-hot Mark “The Filipino Wrecking Machine” Munoz for the right to fight champion Anderson Silva. If that wasn’t enough, British star Michael “The Count” Bisping looks to earn a future crack at the middleweight title when he locks horns with dangerous grappler Demian Maia.

History was made when the UFC® debuted on FOX in November, as 5.7 million viewers (8.8 million peak) tuned in to watch Cain Velasquez battle Junior dos Santos for the heavyweight title. Now, fight fans around the world can gear up for another incredible night of action inside the Octagon® live on FOX.

“This is the show that officially starts our deal with FOX and we’re bringing what the fans want – a night packed with great fights,” UFC President Dana White said. “We’re kicking this thing off with an incredible tripleheader. Rashad Evans looked fantastic in his last fight against Tito Ortiz and he wants to get the belt back. But Phil Davis is no joke. He’s undefeated at 9-0 and has stormed through guys like Brian Stann, Alexander Gustafsson and Rogerio Nogueira. He wants the title shot just as bad as Rashad.

“Chael Sonnen and Mark Munoz are going to collide to see who gets the next crack at Anderson Silva,” White continued. “Both of these guys are phenomenal wrestlers coming off big wins. Chael wants the chance to avenge his loss to Anderson. Mark wants a chance to prove that he’s the best 185-pounder in the world. Plus, we’ve got Michael Bisping against Demian Maia and the winner will be next in line for a title shot after the winner of Sonnen-Munoz.”

UFC® Fight Club™ members will have the opportunity to purchase tickets Wednesday, Dec. 7 at 10 a.m CT via the website www.ufcfightclub.com. A special internet ticket pre-sale will be available to UFC newsletter subscribers Thursday, Dec. 8, starting at 10 a.m. CT. To access this presale, users must register for the UFC newsletter by entering their email address in the "join newsletter" field at the top of ufc.com.

Former light heavyweight champion Rashad Evans (fighting out of Boca Raton, Fla.) has made it clear that he wants a chance to dethrone reigning champion Jon Jones in 2012. Before that can happen, he looks to extend his winning streak to four when he meets “Mr. Wonderful” in a No. 1 contender fight at the United Center. The 32-year-old Evans (21-1-1) dismantled Tito Ortiz in his last fight in August and believes a win over Davis will secure him the highly-coveted shot at the 205-pound title.

“Some people may say I’m already the No. 1 contender, but I’m a fighter not a critic and I will go through anybody who stands in my way until I got a shot at the UFC title,” Evans said.  “Having the opportunity to prove that I’m the top contender in the division on FOX – the biggest stage there is – is just icing on the cake. I will leave no doubt that I’m the top guy in the light heavyweight division after my fight on FOX.”

Phil Davis (fighting out of San Diego, Calif.), 27, is arguably one of the fastest-rising stars in the sport thanks to an undefeated mark of 9-0, including five victories inside the Octagon®. Originally scheduled to fight Evans at UFC 133 before an injury forced his withdrawal, the former national champion wrestler at Penn State University is pleased the stars finally aligned for his much anticipated collision with the former champion.

“I am excited to be a part of the UFC on FOX in Chicago,” Davis said. “I was pretty upset when the fight with Rashad didn't happen in August. I am ready for him now.  He is one of the best guys in the world. I can't wait and I'm confident that I'm going to win.”

Chael Sonnen (fighting out of West Linn, Ore.) continues his quest for a rematch with Anderson Silva on Jan. 28 when he meets Munoz on FOX. Following a loss to the champion in 2010, Sonnen returned to the Octagon® at UFC 136 and submitted the surging Brian Stann. He now faces Munoz, an opponent he once met in college while wrestling for the University of Oregon.

“This is competition between Mark Munoz and me,” Sonnen said. “We competed before, we will compete again. And when it is done, it will be one more in the win column, one more trophy above the mantle, and one more for the bad guy.”

Mark “The Filipino Wrecking Machine” Munoz (fighting out of Vallejo, Calif.) heads to Chicago fresh off a dominant stoppage victory over Chris Leben in the main event of UFC 138 in England in November. A winner of four straight, the former Division I national champion wrestler from Oklahoma State University now has his sights set on besting his friend turned temporary foe, Sonnen.

“Chael and I are friends and will remain friends long after this fight,” the 33-year-old Munoz said. “But make no mistake, when that cage door closes we will not hold back. We will show the world why we are the best at what we do.”

After battering Jason “Mayhem” Miller on Dec. 3, Michael Bisping (fighting out of Manchester, England) firmly believes that his time to fight for the middleweight title is approaching. A winner of four consecutive fights, including the last two by knockout, the 32-year-old leaves no doubt that his clash with Maia is the most important of his career.

“It is a huge honor to fight on American national television on FOX,” Bisping, owner of a 23-3 record said. “Going straight back into camp, missing Christmas, none of that even entered my mind. I want to earn my way to a title shot and fighting a former No. 1 challenger as dangerous as Maia is exactly the opportunity I have been hoping for. This is the most crucial fight of my life.”

Grappling sensation Demian Maia (fighting out of Sao Paulo, Brazil) has won two out of his last three bouts since dropping a decision to champion Silva in Abu Dhabi in 2010. The 34-year-old, who is a two-time world champion in Brazilian Jiu Jitsu, has defeated high-caliber opponents such as Sonnen, Jorge Santiago, Kendall Grove and Dan Miller. When he meets Bisping next month, he knows that a win will put him right back into the title picture.

“I think Michael Bisping is a great fighter and will be one of the hardest fights I ever had,” Maia, 15-3, said. “Some people underrate him, but I think I can never underestimate him. I consider him one of the top contenders at middleweight. He is someone with only three losses in over 20 fights, with one of those losses coming to Rashad in a higher weight class. It shows how tough he is and the challenge that is ahead of me. I'm also very excited to be fighting in Chicago for the first time, a city where I spent part of some of my last training camps, and where I have a lot of friends. If that was not enough, on top of all that, fighting on FOX is a huge opportunity.”