It's not too late to put together your UFC-themed Halloween costume...here are some tips...

See UFC Halloween costumes and submit your own on Facebook 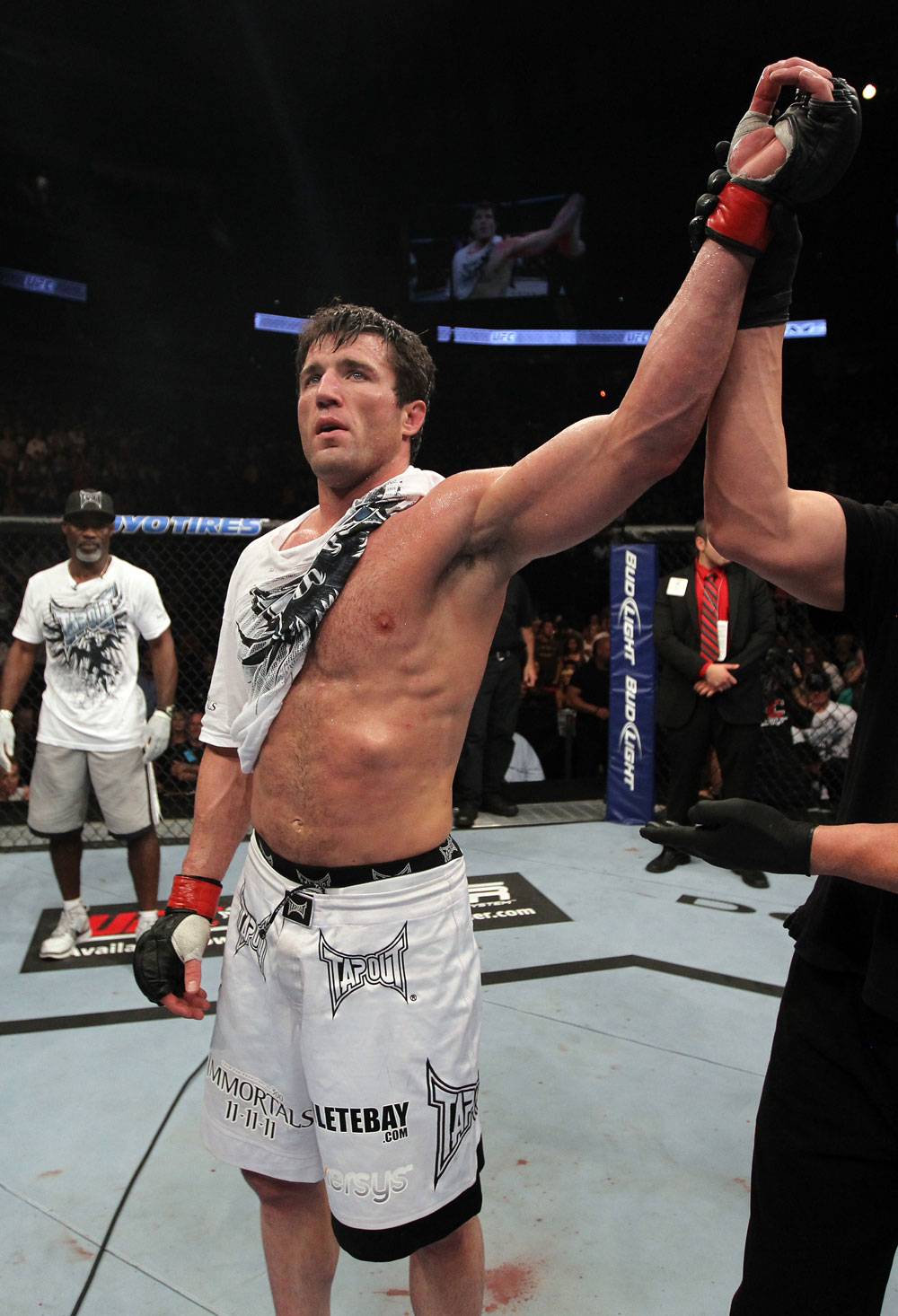 You love Halloween and the UFC, right? Of course you do! Well, here are some ideas for UFC inspired costumes. You can even go all out and have a UFC-themed Halloween Party!

Georges St-Pierre:  To be the welterweight champ for Halloween, draw a fleur de lis tattoo on your right calf and his Kanji tattoo on your chest. Enter the party with a headband and a gi then remove that and begin performing the essence of the "costume": a French-Canadian accent and GSP's most famous catch phrases. "I'm not impressed with your performance", "'e can't 'andle my riddum" and "I'm the best Georges St-Pierre I've ever been".

Roy Nelson (Old School): All you need is a beard, a mullet and a belly. The belly can be real or prosthetic - depending on your body type.

Roy Nelson (2.0): Same as above but with less belly and a lot more beard. The beard can also be real or prosthetic - depending on your facial hair situation.

Dan Hardy: A bright red Mohawk spiked up high will leave little doubt which UFC fighter you're dressing up as. Don't forget to affect a British accent - unless of course, you already have one. Don’t forget to call everyone "mate"

Chael Sonnen: Love him or hate him, you can't ignore him. You can wear a Chael Tapout shirt or his limited edition "Make the Walk" Team Sonnen shirt.  But the real key to being Chael is memorizing his many hilarious and controversial quotes and saying them at the appropriate time. If there's a guy dressed as Anderson Silva at the party, be sure to put your finger in his chest and call him out, telling him that you are in fact the "true middleweight champion". If there isn't an Anderson Silva at the party be sure to accuse him of ducking you to anyone who will listen. If there are any Brazilians at the party, assure them that it is just a costume to avoid a fight breaking out.

Jon Jones: Just get yourself a UFC Championship replica belt and get some sort of tubing to extend your arm length a good 6 or 7 inches to replicate the longest reach (84.5”) in the UFC. A little pre-party crimefighting doesn’t hurt either.

Dennis Hallman:  This one isn’t for the modest soul. Get the tightest, shortest baby blue speedos you can find, write "training mask" on them and wear confidently. Short blond hair will add to the costume.

Brian Ebersole: This requires some chest hair, enough to shave into the signature up arrow. The "hairrow" if you will. If you don't have your own chest hair, feel free to glue some hair in an arrow shape to a flesh colored shirt. Where you get the hair is up to you, but be sure to follow all local laws and statutes as well as basic sanitary practices.

Jason “Mayhem” Miller: Dye your hair bright yellow, Wear a TUF Team Miller shirt with Miller crossed out and Mayhem written in. Practice your hearty Mayhem laugh. Recruit people to join your Mayhem Monkey Cult. For added realism, if you have access to a Dachshund, bring it to play Mayhem’s dog, Gator.

Nick Diaz: Mean mug everyone at the party, especially the person dressed as Mayhem Miller. Refer to everything as "whatever". Alternately, don't show up to the party but make a youtube video the next day derisively referring to the party as a beauty pageant. Either way, be sure to shout out Cesar Gracie Jiu-Jitsu and “the 209” as often as possible.

“Danny Boy” Downes: If you're more the nerdy, intellectual UFC fan, then you're probably already a “Danny Boy” fan. Wear Dan's signature green & white Carling jersey, glasses and carry a book. For added effect carry a huge wallet packed with coffee cards and whip it out when people ask you for your ID. Say something along the lines of "I swear I'm 25, my ID is in here somewhere.... I fight in the UFC you know? Seriously."

Anthony "Showtime" Pettis: Grow a soul patch on your chin, get a flesh colored shirt and draw the Showtime tattoo on the upper back. Run up walls at your own risk.

Josh Koscheck: To pull off the "Kos", you need a curly blond wig and the guts to pull mild pranks on everyone at the party - especially the guy dressed as GSP. Perhaps, hide his gi three or four feet from where he left it. Happy Halloween! You've been Kos'd!

Steven Seagal: While not a UFC fighter, Mr. Seagal has been seen at many UFC events and reportedly helped train a few fighters like Anderson Silva and Lyoto Machida. Seagal's signature look involves a black do rag on his head and yellow shooting glasses. Offer to teach other people at the party your "deadly arts".

Dana White: If you're bald or have access to a bald "wig", you can be the UFC President. Be sure to curse liberally, assuming you're in company that won't be offended by that sort of language. Ask people if they want to be an F-in' fighter. Tweet from your phone frequently. Hand out bonuses for the best costumes. Count the amount of people at the party and announce that number as "the gate".