Take a look back at Ronda Rousey’s legendary fight career by recapping her greatest moments inside the Octagon
By THOMAS GERBASI, ON TWITTER: @TGERBASI • Mar. 30, 2022

When UFC President Dana White announced that Ronda Rousey had signed with the UFC, it changed combat sports forever.

Before Rousey put ink to paper, women hadn’t had the chance to compete inside the Octagon. But after impressing the boss with a dominant run in Strikeforce, Rousey simply became undeniable.

Very few names in MMA have transcended the sport quite like “Rowdy” Ronda, a true trailblazer for woman in combat sports. Even after her fighting career came to an end, Rousey made history by becoming the first woman to be inducted into the UFC Hall of Fame. 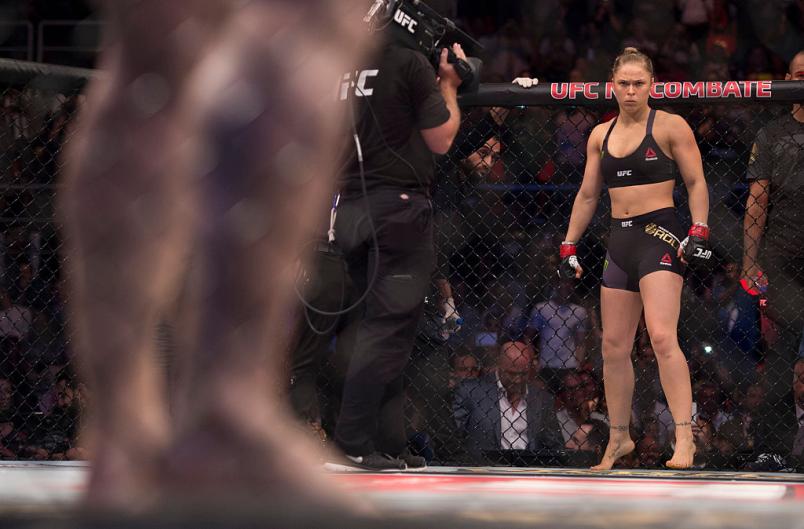 Rousey has continued to entertain fans since retiring by transitioning to acting and professional wrestling. And she continued to make history by competing in the first women’s match to headline a Wrestlemania event. As fans prepare for Rousey’s WWE return at Wrestlemania 38, take a look back at “Rowdy” Ronda’s greatest moments in the UFC. 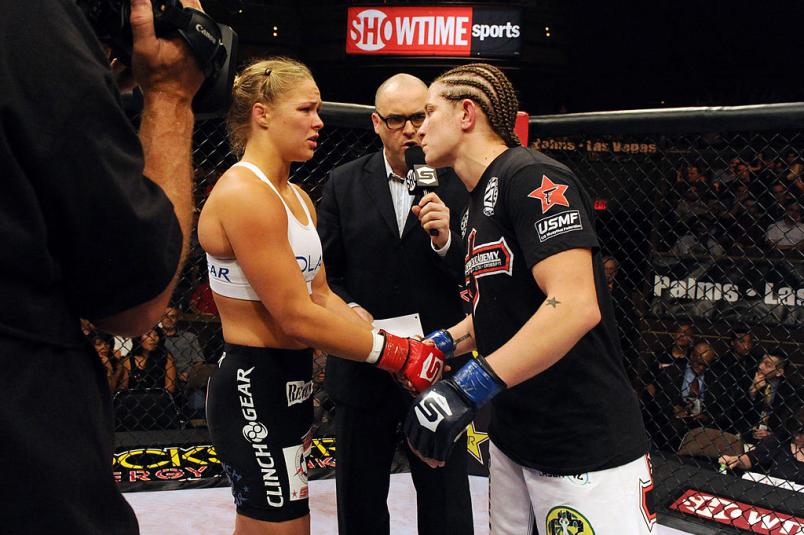 LAS VEGAS - AUGUST 12: (L-R) Ronda Rousey celebrates after her victory over Sarah D'Alelio at the Pearl at the Palms on August 12, 2011 in Las Vegas, Nevada. (Photo by Kari Hubert/Forza LLC/Forza LLC via Getty Images)

After three amateur and two pro wins, all ending in the first round via armbar submission, Ronda Rousey was well known to hardcore fight followers when it was announced that she was signed to a Strikeforce contract. More casual fans were about to get their dose of “Rowdy” Ronda on August 12, 2011, and the Californian didn’t disappoint, as she finished D’Alelio in just 25 seconds by way of – you guessed it – armbar.

Check Out Rousey vs D’Alelio On UFC Fight Pass 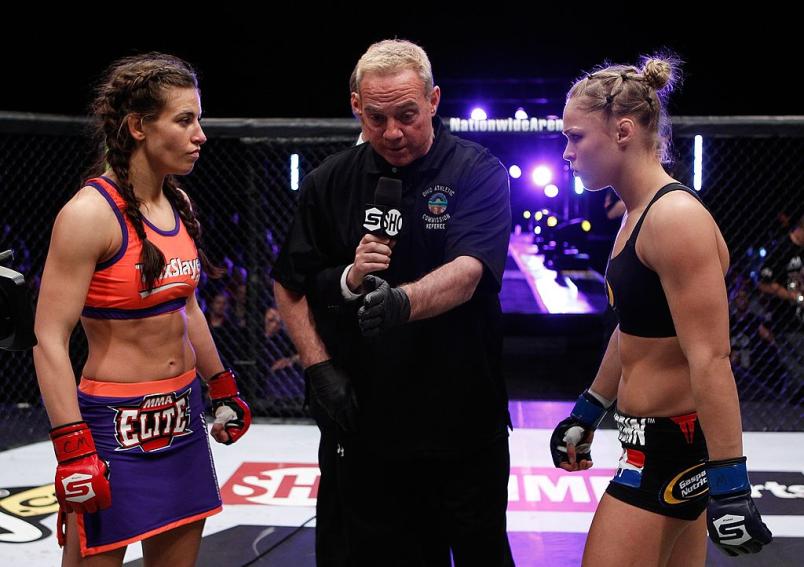 Miesha Tate (left) and Ronda Rousey (right) face off before their bantamweight championship fight during the Strikeforce event at Nationwide Arena on March 3, 2012 in Columbus, Ohio. (Photo by Esther Lin/Forza LLC/Forza LLC via Getty Images)

After Rousey dispatched Julia Budd in 39 seconds three months after her Strikeforce debut, the only logical bout was against someone who quickly became her rival, the promotion’s bantamweight champion, Miesha Tate. It was clearly the biggest fight to be made in women’s MMA, and you have to remember that at this time, the UFC didn’t have any women’s divisions and UFC President Dana White was adamant that it would stay that way. At least until this fight.

With the attention shown to the bout, the charisma of both combatants, and the high-level skill they both showed on fight night, White was convinced that the UFC was ready for the ladies. Of course, taking away the historical aspect of this matchup, there was still a fight to be fought, and Rousey was as dominant as ever, defeating her toughest opponent to date by first-round submission, nearly taking Tate’s arm home with her in the process. 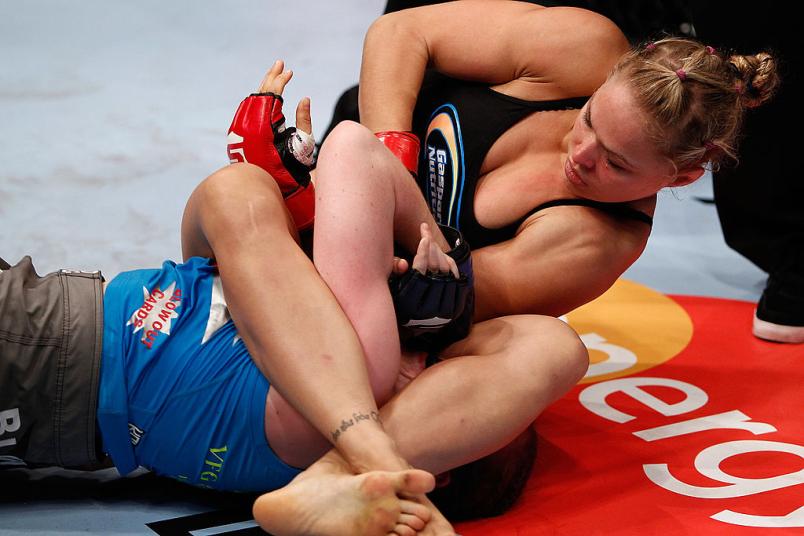 Rousey had made her point to the world with wins over wrestlers and grapplers, and while Julia Budd came from a striking background, former Strikeforce champ Sarah Kaufman was a level above most on the feet, so the question leading into their summer of 2012 title fight was whether the unbeaten Rousey could take a punch from a striker used to knocking people out.

Well, we never found out, as Rousey again proved to be a one-of-a-kind finisher, submitting Kaufman in less than a minute. Next stop, UFC. 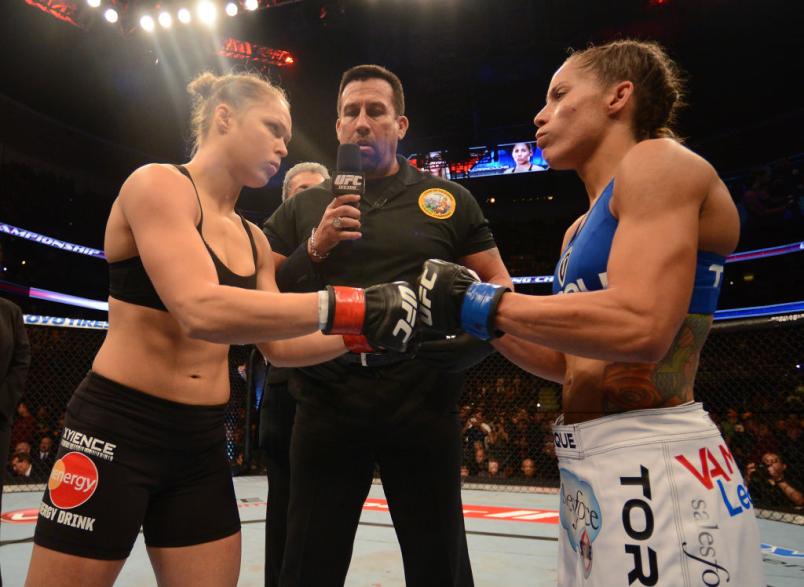 History was made at the Honda Center in Anaheim in February of 2013, and for one night, it was the Ronda Center, as the newly crowned UFC women’s bantamweight champion - Rousey - submitted Liz Carmouche in the first round of the first female fight ever seen in the UFC. That’s the condensed version. The expanded one is that before Rousey’s armbar ended matters, Carmouche caught Rousey in a rear naked choke and nearly changed the WMMA universe before it even picked up momentum. In the end though, both fighters showed that women belonged in the UFC, Rousey showed heart, and the fun was just beginning. 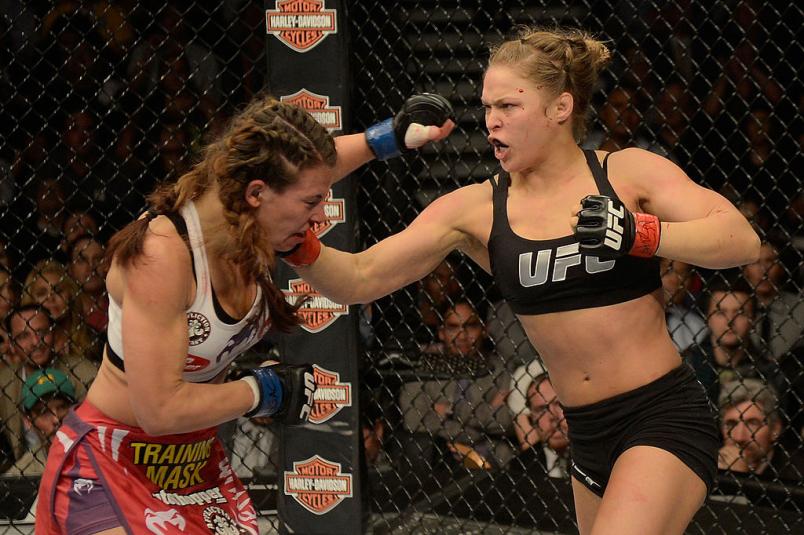 Rousey nearly breaking Tate’s arm in their first meeting did nothing to cool down the rivalry between the two, and things only escalated during their coaching stint against each other on The Ultimate Fighter 18. But what was expected to be a repeat in their UFC 168 rematch instead pushed Rousey further than she had ever gone before. The ultra-tough Tate pushed the champ out of the first round for the first time, but Rousey didn’t go away. Instead, she kept the heat on Tate until finishing her in the third round of an exciting battle that earned Fight and Submission of the Night honors.

Watch The Conclusion To The Classic Rivalry On UFC Fight Pass

The hype surrounding Ronda Rousey continued to grow after UFC 168, with magazine covers, mainstream features, and movie roles following in rapid succession. For any other fighter, it would have been caused to be distracted and lose focus.

Rousey just got more intimidating and devastating in the Octagon, and in her three title defenses against Sara McMann, Alexis Davis and Cat Zingano, she looked unstoppable, defeating that world-class trio of foes in 66, 16, and 14 seconds, respectively. Sports Illustrated went on to call Rousey the most dominant athlete in sports that year, and they were right on target with that description.

Rousey would go on to blast out Bethe Correia in 34 seconds in August 2015, and while Holly Holm removed the 135-pound crown from her possession three months after that bout, Rousey's devastating run at the top was something no one will ever forget.