December 20. The UFC Fight Night event at the Apex the evening before was in the books, meaning that for the next three weeks the Octagon would be dark.

So where was the UFC’s Senior Vice President of Government and Regulatory Affairs, Marc Ratner, on Sunday night?

Courtside at the UNLV vs. Pacific basketball game, running the shot clock as he has for the school’s home games for over 35 years. That’s not to mention his duties as a Division I football official for over two decades, with three bowl games under his belt.

He appreciates having a reputation like that, and when asked about it, he goes back to his work in collegiate and high school sports.

“I think more than anything, with all the major craziness I dealt with in boxing, I was able to stay calm, whether it was ‘The Bite Fight’ (Holyfield-Tyson 2) or the Fan Man (Holyfield-Bowe 2), or Zab (Judah) and Floyd (Mayweather)'s father and uncle fighting, I was always pretty calm, and that comes, I believe, from officiating basketball and football, where you have to stay calm and not get carried away and get mad at a coach. So I think that background really helped me. It's all about people, and you have to be able to talk and listen and that's one of my better qualities that I don't make real quick decisions. I try to hear all sides and try to be reasonable.”

So it was no surprise that the UFC, which had emerged from some dark days thanks to the success of The Ultimate Fighter in 2005, reached out to Ratner, then the Executive Director of the Nevada State Athletic Commission, when the promotion wanted to expand its reach and get the sport of mixed martial arts sanctioned throughout the United States and the world.

“When Lorenzo (Fertitta) first called me in the fall of '05, I thought it was just to talk about rules and what we could do better as a commission,” Ratner recalled. “And then he said, I may have something for you in the future. That was all. Then, I would say early January (2006), now it's Dana (White) and Lorenzo and Kirk (Hendrick), and they said, 'Marc, you understand the sport, we think you can help us get it approved in other places. You know how the State commissions work and you know a lot of them.”

Then came the big question: “Have you ever thought about leaving the commission?”

“No,” Ratner replied. “I think I have the best regulatory job in the world.”

He did listen to what was being proposed, though, and as he thought about joining the UFC, he realized he had the chance to change the sport forever in a positive way. That was the ultimate selling point. And Ratner was in.

“I think the main reason that I came over was because it was a chance to be on the ground floor of a new sport,” said Ratner, who is in his 15th year with the company. “None of us were here for baseball or football, but this was still a brand new sport in so many ways, and I think that was a deciding factor.” 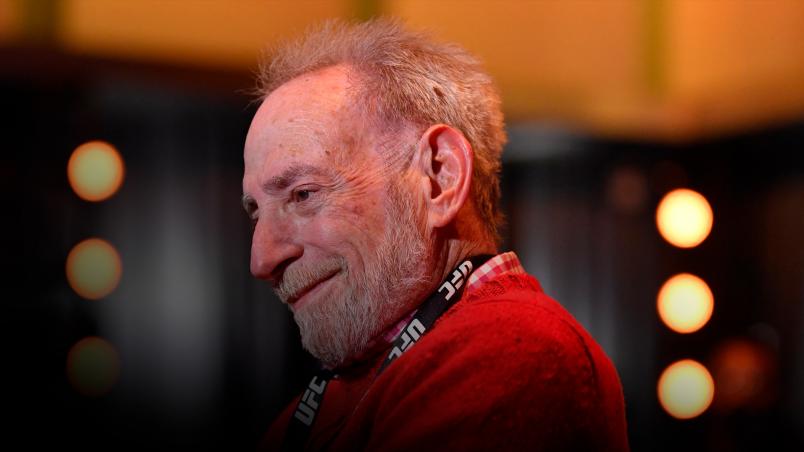 UFC Vice President of Regulatory Affairs Marc Ratner looks on after being announced as a newly elected member of the UFC Hall of Fame during the UFC 255 event at UFC APEX on November 21, 2020 in Las Vegas, Nevada. (Photo by Jeff Bottari/Zuffa LLC)

It was a major hire for the UFC, and one that sent shockwaves through the boxing world, which wasn’t too happy about this sudden development.

“When it was first announced, I had some people say, 'You're betraying the sport of boxing,' which was a weird thing to say,” said Ratner. “When I left, the commission staff was a little upset because it left them not knowing what would be next. The commissioners understood. But I found there was a lot of negative reaction around the boxing world. They were saying, ‘Once you leave, it's gonna be hard to come back,’ and that kind of stuff.”

What they didn’t realize was that a boxing lifer, Ratner wasn’t abandoning the sport; he was just helping the growth of another one. He is still a diehard fan of the sweet science and can be seen ringside at the big Vegas fights. It’s just like the old days. The only thing that’s changed is the conversations that take place on fight night.

“What's amazing is that now when I go to a boxing match, they don't want to discuss anything but the UFC,” he laughs.

That’s not surprising, considering that Ratner led the charge that resulted in mixed martial arts being sanctioned in all 50 states, as well as in several countries around the world that didn’t have the sport legal before his arrival. For perspective, only 22 states in the U.S. regulated MMA when Ratner arrived. And while New York was a long, hard fight, it wasn’t the only one.

“Massachusetts was tough, we had a lot of meetings there,” Ratner said. “Connecticut, even to this day, they have so many different rules, and that made it tough. Toronto was very hard because we had to go to Ottawa and get things changed - they had a national law that precluded MMA. So there were little battles, but what I want more than anything is to say that it was not only me. There were quite a few different people that were with me, like Mike Mersch, and certainly in New York, there was Lorenzo and Dana and different fighters. So I never want that to be glossed over. We had a lot of help.”

Yet if there was a highlight, it would have to be the week of the UFC 205 event in New York City’s Madison Square Garden on November 12, 2016. As Conor McGregor faced Eddie Alvarez in the main event at the World’s Most Famous Arena, Ratner could exhale.

“Nothing was as special for me,” he said. “It started when we finally got New York done and went to the Assembly and saw the vote finally after all those years. Then I was at the Garden for the weigh-in and saw over 15,000 people there. And certainly, the next night, it was Conor and Eddie Alvarez. It was one of the most exciting nights for me to see this vision we all had about New York come to fruition. That was a big weekend.”

MORE: There Is Only One Georges St-Pierre | 2020 Fight of the Night Power Rankings | Photo Gallery: Jessica Eye Trains For UFC 257 | Griffin, Bonnar, and the Night That Changed Everything | Order UFC 257 For Any Device