Ever wonder how your favorite fighter got so ripped? It probably came from punching something. 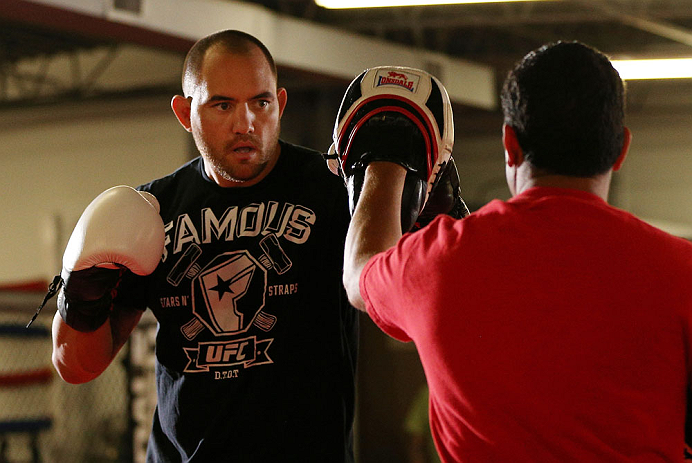 When a boxing or Muay Thai class begins at one of the UFC Gyms, a crowd always gathers to watch. It might be the percussive sounds of the gloves hitting the heavy bags and focus mitts or the blend of hard work and athleticism that draws attention. Or it could be the chiseled abs and shoulders.

“The boxing classes not only look fun, to spectators but when they see the shape of the people doing those classes they think, It must be coming from those workouts,” says Andy Hennebelle, NASM-CPT, CSCS, USAW, a strength coach and personal trainer at the UFC Gym in Corona, Calif.

Most gym-goers separate exercise into two categories in their minds: cardio to burn fat and weights to build muscle. But a boxing workout is a hybrid of the two. The fast pace will send your heartrate through the roof while the constant rotation and striking of the heavy bag will develop the musculature of the core and upper body.

“Muscle-wise a boxing workout will get your back, arms, and shoulders in shape. If you are doing it right it will work your whole body. And cardio-wise there is nothing like it. You can take a guy who runs marathons and ask him to come hit the bag for five minutes and he will have a completely different experience,” says Travis Browne, who faces Antonio “Bigfoot” Silva at UFC on FOX 5 at the Target Center in Minneapolis, Minn. Browne knows a thing or two about the pugilistic arts. He has won 13 fights in his undefeated career, eight of them with his fists.

The boxing class at a UFC Gym and the stand-up sessions that Browne does at the world-class Jackson-Winkeljohn Martial Arts and Fitness Academy in Albuquerque, New Mexico are surprisingly similar. Both places begin with a dynamic warm-up followed by jumping rope and shadowboxing.

“Shadowboxing is all about how hard you push it. If you just stand around and throw lazy punches and don’t move your feet it is will be pointless,” says Browne. “But if you go in there and really push the pace, keep your hands up, throw a lot of combinations, and use quick hands and fast feet you will really break a sweat.”

Strong fundamentals are the soul of boxing, and even a seasoned pro like Browne begins with the classic money-maker combinations. A basic jab-cross (known as a “one-two”) might be easy to learn but it takes thousands of repetitions to master. A UFC Gym class follows the same philosophy.

“There is a preset beginning phase of each class in which we teach and review the key components,” says Hennebelle. “In case there is a brand new member alongside more advanced individuals, we want to make sure we always introduce them to the key strikes: The jab, cross, and hook.”

The main work sets of the session are divided into rounds. This makes the workout extraordinarily versatile as the number of rounds, the length of the round, and the length of the rest periods can be manipulated for athletes of all conditioning levels. Boxers have been measuring their workouts by rounds long before the phrase “interval training” was invented. A beginner might hit the bag for two minutes and rest for 60 seconds, eventually progressing to longer and longer rounds. Similarly, Browne began his eight week fight camp by doing three five-minute rounds on the heavy bag with 45 seconds rest between. For his headlining fight against Silva, he has worked up to five 5-minte rounds.

“I think the average person strongly underestimates the conditioning that goes into hitting a bag for five minutes straight,” says the undefeated heavyweight who originally hails from Hawaii. “It looks easy when a pro is doing it, but in reality it takes a lot of conditioning and a lot of knowledge.”

The focus mitts are a dynamic tool that helps develop technique by allowing the athlete to work angles and distance as well as learning how to throw punches moving backward and forward. It is the heavy bag, though, that provides the muscle-building resistance to a boxing workout.

“When the muscle strikes the bag there is a compressive force. The force that is generated from the strike is like a tuning fork,” describes Hennebelle. “The body stops that vibration and that is what stimulates the muscle and the central nervous system.”

Hitting the heavy bag and focus mitts has helped Browne get his 6’7” inch frame in fighting form, and his motor ready to go five hard rounds. The good news is that the boxing class at the UFC Gym can get you in amazing shape as well, but you won’t have to fight Antonio Silva after eight weeks.

“We are going to train you like a fighter and make you feel what a fighter goes through,” says Hennebelle. “But we aren’t going to send you out the door with a bloody nose and black eye.