For some fighters, the more low-tech the workout the better

Starting a workout regimen can be intimidating enough without looking around the gym and feeling overwhelmed by the kettlebells, Reformers, rings, bars and climbers. Yet a growing number of fitness fans are rediscovering the basics and relying on no equipment other than their own body mass to get in shape.

“The primary muscle groups in any program are the chest, back, quads, and hamstrings,”
says Andy Hennebelle, NASM-CPT, CSCS, USAW, a strength coach at the UFC
Gym in Corona, Calif. “You can hit all of those without so much as a
weight or machine. Just do squats, lunges, push-ups and pull-ups. If
you want to add in the core you can do sit-ups as well.”

And this isn't just an option for beginners -- some professional athletes eschew bells and whistles for bodyweight exercises. UFC welterweight Mike Swick is one of those. “I feel way stronger when I lift my
own body. When I do max reps for push-ups and pull-ups I am doing so
many reps,” he says. “When you lift weight the
most reps you do is probably 20 or so. I am doing upwards of 100 reps.
That is a lot of repetitions and a lot of weight.”

Swick's Story
When Swick entered the Staples Center in Los Angeles last August at UFC on Fox 4 for his first fight in two and a half years, the crowd was on its feet. Not only has Swick been a fan favorite since appearing on the first season of The Ultimate Fighter, spectators were curious about what Swick might look like. He had battled a gauntlet of injuries and a well-publicized esophageal disorder that made it difficult for him to consume proper nutrition. Would he be the same Mike “Quick” Swick? 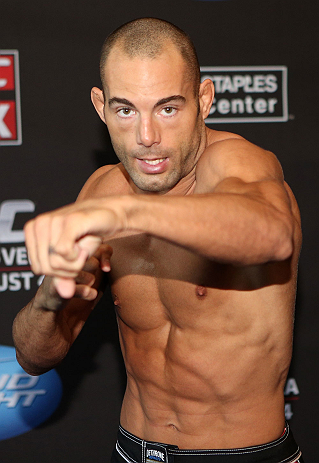 If anything, Swick looked better than ever. He was a ripped-to-the-bone four percent body fat with cheese-grater abs and muscles that looked strong and fast. Early in the second round Swick, crushed his opponent with a single punch and then dropped a bomb from above that had more velocity on it than Felix Baumgartner. It earned him the Knockout of the Night bonus.

What is most surprising about Swick, both his chiseled-granite physique and his sonic-boom punching power, is that he doesn’t lift weights. Swick relies solely on bodyweight exercises.

“For me, this is what works,” he says. “When you use your own body weight and work hard and do the reps you get a lot of results out of it.”

It’s not as if Swick is stuck in 1985, emulating Sylvester Stallone preparing for Ivan Drago by running in the snow and performing endless push-ups, pull-ups, and sit-ups. The welterweight fighter has been involved in martial arts since he was a
kid, and has been in gyms for 25 straight years. He has seen dozens of
different training methods, tried most of them, and decided that moving
his own weight works best.

Easy as 4-2-1
Every day, Swick will do five sets of as many push-ups as he can do, repping out until he reaches muscular failure. He will recover for about 60 seconds and then begin his next set. Three days a week he includes five sets of max rep chin-ups. He will usually reach 35 chin-ups on his first set alone. A few other times a week he does two sets of 100 reps of body weight squats. At night, he performs neck raises using a sandbag as resistance. Despite its simplicity, it is a remarkably balanced program.

When training a member at UFC Gym who is relatively new to fitness Hennebelle will often start them off with a regimen of bodyweight exercises. This not only prepares their muscles and tendons for eventually lifting heavier loads, but teaches people how to manipulate their own bodies in space, which is the basis for athleticism.

For anyone who scoffs at the challenge of bodyweight exercises Henebelle has them perform what he calls a “4-2-1” push or squat: Take four seconds to lower your body, hold the bottom of the rep for two seconds, and then come up to a count of one.

“It is comical to watch even the fittest person struggle with holding their body weight up for longer than it takes to do a quick rep,” says Hennebelle.

Training without Tear
For Swick, who meets Matt Brown in Seattle at UFC On FOX 5 on December 8, an added bonus to his training methods is the relatively low risk of injury. While it’s not impossible to get hurt performing push-ups and pull-ups, especially with the volume Swick does, bodyweight exercises do not inflict the type of wear and tear that lifting weights can.

“My elbows are always really sensitive so I have to be careful with anything else I do with my arms. I started doing curls and triceps extension and after just one month I started having problems with my elbows. It is just too much for my joints. We do so much mitt work, sparring, and bag work that when I start cranking out curls and extensions, it is just too much,” he says. “Push-ups work the arms anyway.”

Even when he fought at middleweight, Swick relied on his strength in almost all of his fights. At welterweight, he feels physically dominant. His last performance, and the body he lifted to prepare for it, speaks for itself.

“I felt amazing for my last fight,” he says. “I felt strong I felt in shape. I had four percent body fat and I didn’t lift weights. I just don’t need them Some people might be different, but after 25 years in martial arts I have a good feeling for what works for me.”