When it comes to doing cardio, less can be more.

Everyone dreads a long boring session on the treadmill. Luckily, some recent studies show that mind-numbing repetition doesn’t have to be part of the fat-burning process. A short intense workout can have the same or even greater benefits than slogging through long arduous miles.

Commonly referred to as High-intensity Interval Training, or HIT, this type of workout intersperses fast-paced efforts with slower recovery work. An athlete might get on a stationary bike and go hard for one minute, followed by 60 seconds of easy pedaling. He’ll repeat that 10 times and then he’s done. A whole workout wrapped up in just about 20 minutes. 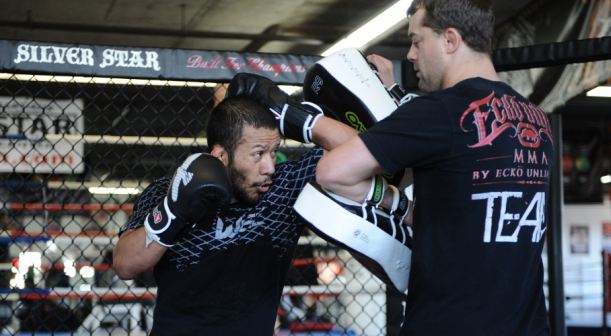 UFC bantamweight contender Ivan Menjivar has been using a HIT protocol
twice a week in preparation for his fight against Azamat Gashimov at UFC
154 on November 17. The Salvadorean fighter who trains out of the famed
Tristar Gym in Montreal, Quebec, Canada, utilizes a professional-level
treadmill that can accelerate quickly and can achieve higher speeds than
commercial models.

“I sprint for as long as my coach says, then I rest for about one minute
between each sprint,” says Menjivar.

Train Hard...
The trade-off for getting more out of a 20-minute workout than others
get from doing 45 minutes is the intensity. The work intervals during a
HIT session should be difficult.

“The simple fact is, the calorie expenditure at the end of a HIT segment will be greater than a constant rate cardio workout,” says Andy Hennebelle, NASM-CPT, CSCS, USAW, a strength coach at the UFC Gym in Corona, Calif. “You will also experience an after-burn effect. You work for less time and you get a better expenditure even after your workout is over.”

What Hennebelle is referring to is the secret of HIT, what scientists call EPOC, or Excess Post-exercise Oxygen Consumption. In the 24 hours after a particularly intense workout your body will continue to burn calories at an elevated rate. So if you do a HIT session in the morning  you will still be reaping the benefits hours later when you're sitting at your desk at work; meanwhile, the guy thumbing through a graphic novel on a recumbent bike stops burning calories as soon as the pedals cease spinning.

High-intensity intervals can be adapted to a number of exercises and be
performed outdoors or in a gym. Beginners should start on a simple piece
of cardio equipment such as a stationary bike or elliptical trainer. Start with one-minute intervals, and increase the number of reps or decrease your recovery time as you get more used to the workout.

A
more difficult challenge would be to complete the intervals on a
total-body apparatus such as an Airdyne bike or Concept2 rower. You can
also be creative and build a workout around jumping rope, hitting Thai pads, running hills, or even alternating between exercises in a custom circuit that's challenging for you.

...Just Not Too Hard
Trainers used to believe that it had to
be an all-out Nietzschean pain-fest to be effective, but recent
research shows that you can stop short of landing on death’s door and
still reap the fat-burning and conditioning benefits. One study from McMaster University put six men through three HIT sessions a week for two weeks. During each workout the subjects performed approximately 10 one-minute intervals on a stationary bike, with 75 seconds of recovery between.

Instead of pedaling in an all-out effort, the cyclists backed off the intensity just a little bit. After two weeks, the doctors took various muscle samples and concluded that the HIT subjects -- who worked out a total of just 67.5 minutes each week -- enjoyed the same physiological improvements as someone who cycled for 10 hours a week at a more moderate pace.

Mix It Up
High-intensity Interval Training may be just what your regimen needs, but it isn’t everything you need. Menjivar wisely rounds out his cardio training by interspersing longer steady-state runs through a forest near his home as well as some easy swimming. Even the scientists who have conducted the studies showing the power of HIT believe that athletes can benefit from a mix of fast-paced intervals and longer more moderate efforts.

If it sounds too difficult to fit both workouts into a busy week, just remember this fighter’s words of advice:

“Nothing is hard when you love what you do,” laughs Menhjivar.