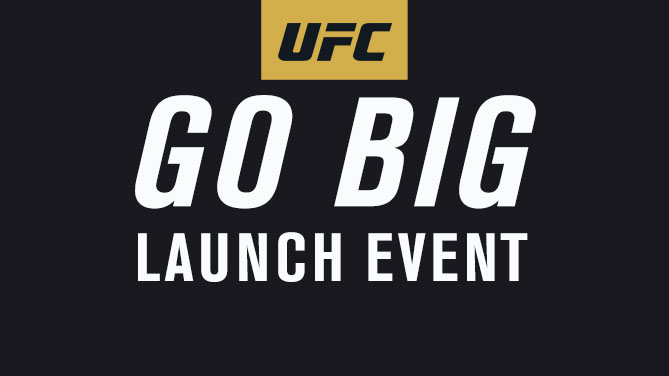 Following two previous campaigns to promote the slate of upcoming events, the UFC already had enough ammo for the latest to live up to the “Go Big” title.

But Friday in Las Vegas, the promotion decided to add one more event to the previously announced ten shows running from September 26 through December 19, with a UFC FIGHT PASS card to take place at The Chelsea at The Cosmopolitan of Las Vegas on Thursday, December 10.

If you’re keeping score at the home, that will mark the first time in UFC history that events are scheduled for three consecutive days, with the December 10 event followed by the Ultimate Fighter Finale card at the same venue on December 11, and UFC 194 at the MGM Grand on December 12.

“We have all these great fights happening in December, and we started looking at the end of the year, and a lot of other people needed fights, so we said ‘let’s do three in a row,’” UFC President Dana White said. “It’s a killer weekend in Vegas right before Christmas, and we’re gonna do it.”

A main event for the December 10 card was not announced Friday, but a co-main event for UFC 193 in Melbourne, Australia on November 14 was, as women’s strawweight champion Joanna Jedrzejczyk will make the second defense of her crown against Canadian contender Valerie Letourneau.

“This whole women’s thing is so crazy right now; it’s on fire,” White said. “Joanna is our little rockstar too, so we decided to do Ronda and Joanna together, defending their titles in Melbourne.”

Several of the headliners for the other shows were also in attendance at the press conference held at the MGM before the weigh-ins for UFC 191, which takes place in the same building on Saturday.

Not surprisingly, McGregor made plenty of noise and probably a few enemies in a different weight class as he jawed with lightweight standouts Dos Anjos and Donald Cerrone, as well as former opponent Chad Mendes.

“I’m the money fight in all weight divisions,” McGregor blurted as he went back and forth with the fighters competing for the 155-pound title on December 19.

Aldo sat stone-faced through the proceedings, clearly eager for his long-awaited clash with the Irishman, which is the crown jewel of a full slate of exciting bouts.

“I think he’s a clown,” the featherweight champ said of McGregor just before the two had to be separated after clashing heads during a staredown. “I’m really sorry that I couldn’t fight him the last time, and when and when it comes time to fight him now, I’ll kick his ass.”

White also confirmed the date for the historic UFC 200 event, as the 2016 edition of International Fight Week will culminate with the card at the new Las Vegas Arena on Saturday, July 9.