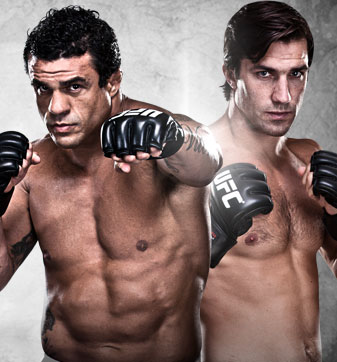 The UFC will land in Brazil again this weekend with another huge card including a main event that will pit Octagon legend Vitor Belfort against the last ever Strikeforce middleweight champion, Luke Rockhold, in the main event.

The show will also feature the long awaited UFC debut of grappling ace and middleweight contender Ronaldo "Jacare" Souza, as he faces Chris Camozzi, who enters the bout on a four-fight win streak.

In today's preview we take a look at the main card and some of the variables that will likely make a big impact as the UFC Pick ‘Em game returns for UFC on FX 8.

1) Vitor Belfort is a finisher with little regard for his opponent's safety in the first five minutes of the fight. While Belfort has competed at heavyweight, light heavyweight and middleweight during his long career with the UFC, one thing has stayed constant - he finishes his opponents early and viciously. Belfort has the most first round finishes of any fighter in UFC history. He's had 15 of 18 career finishes come in the first round and has 10 first round finishes alone in the UFC. He's a headhunter too, with 80.7-percent of his strikes aimed right at his opponent's noggin, so if he's gunning for Rockhold, his head will likely be the target. While his last fight with Michael Bisping lasted until the second round, the result was still the same. Belfort knocked him out with a high kick less than two minutes into the second session. The point here being Belfort is nasty and dangerous, especially in the early part of a fight.

2) If Belfort's propensity to finish fights early is his biggest weapon, staying around deep and pulling off a decision is his Achilles' heel. Throughout his career, Belfort has dropped five of his ten career losses by way of judges' decision. It's been noted by numerous opponents in the past that as quick a starter Belfort is early, that same burst of energy can drain him late. Meanwhile, Luke Rockhold has plenty of staying power. The former Strikeforce champion has a ton of first round finishes of his own, but two out of his last three fights have gone the championship distance, where he's had to battle for 25 minutes each time. Rockhold doesn't seem to fade as the clock keeps ticking, so if this fight makes it out of round two, the favor falls on the side of the American.

3) Ronaldo "Jacare" Souza is a submission machine. Former UFC middleweight contender Demian Maia held the distinction as the best grappler to ever grace the Octagon, but he may have to hand over that crown to Jacare now that he's arrived. The Brazilian is unbelievably devastating on the ground, earning 13 of his 17 career wins by submission, and has virtually every grappling title known to man on his resume. It's also no secret that his opponent Chris Camozzi took this fight just days ago and while he was preparing for a fight on the card already, being matched up with Souza is no easy task to take with two months of time to prepare, much less two weeks. Look for Souza to drag this one to the ground and put Camozzi into some very tough spots early and often.

4) Rafael Natal has the pressure on him against a late notice replacement, but look for him to shine. When Camozzi was selected to fight Jacare on two weeks’ notice it came at the cost of an opponent for Natal. So the UFC brought newcomer Joao Zeferino in to face Natal on the main card at UFC on FX 8. It's no easy task for Zeferino taking on a six-time Octagon veteran like Natal on short notice. Natal is well trained under famed coach Renzo Gracie, and his ground game is no joke. Natal has the fourth highest takedown average among active middleweights, and also exhibits 75-percent takedown defense. The lesson here? If the fight hits the mat it's likely Natal will be the one taking it there. Natal's average fight length does go beyond 13 minutes however, so he could very well take Zeferino deep into the fight before finishing him or taking home the decision.