Michael DiSanto checks in with his take on Friday's UFC on FX 2 card... 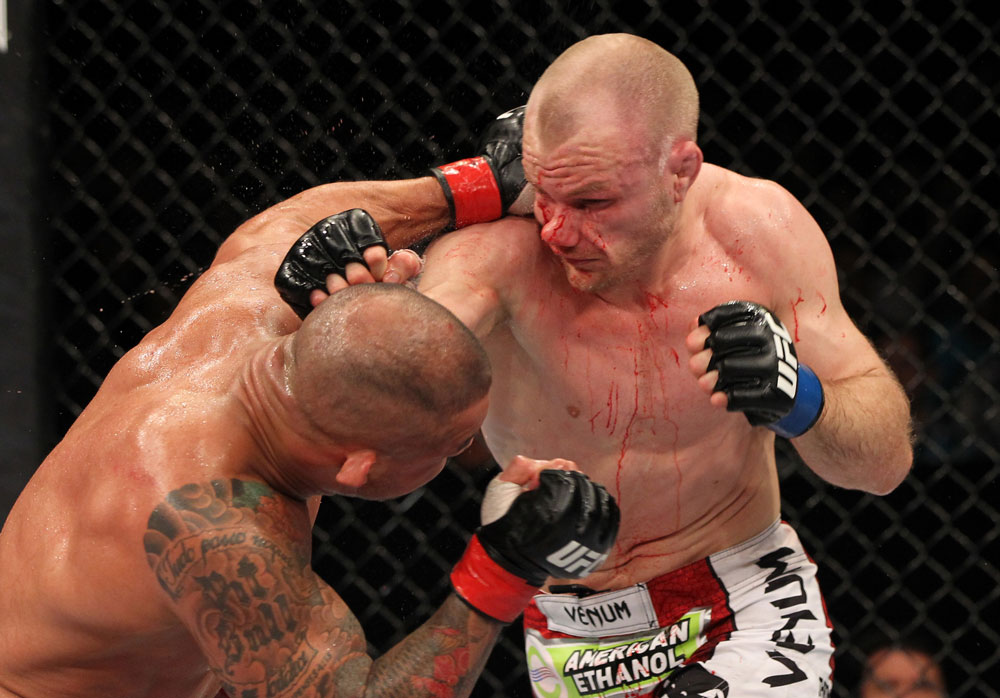 CAN HE KEEP IT GOING?

Martin Kampmann arguably scored the most significant win of his mixed martial arts career by stopping Thiago Alves with 48 seconds left in their main event bout on Friday night. The quality of the win puts him right in the thick of the welterweight mix. And the come-from-behind nature of the win creates a buzz among fans that probably puts him closer to the top of the mix than the middle.

Kampmann now has back-to-back welterweight wins for the third time in his UFC career. But he has never won three in a row. Jake Shields and Paul Daley spoiled his last two bids for three straight. The big question in my mind is whether Kampmann will be able to take his career to the next level by racking up a third-straight win. If so, he may very find himself staring at a title shot.

When the calendar turned the page for the start of 2009, Alves was the consensus number two welterweight in the world. He was in the midst of a seven-fight winning streak, including back-to-back one-sided wins over Josh Koscheck and Matt Hughes. Then, he ran into some guy named Georges St-Pierre and everything changed.

Alves got dominated by GSP, and that sparked a bumpy ride for the Brazilian. The loss to Kampmann is his fourth loss in his last six fights. That is a stark contrast to the seven-fight winning streak that earned the “Pitbull” his first title challenge.

It doesn’t take a rocket scientist to know that Alves needs to change up something about his game, whether it is his preparation, his approach inside the cage, the amount of weight that he cuts or maybe just his mental state. I actually think the final item in that list is the big issue for him. Alves believed that he was invincible during his winning streak. He hasn’t struck me as having the same unyielding self-confidence since the GSP fight.

BENAVIDEZ NOW THE MAN TO BEAT

Many thought that Ian McCall was the top flyweight in the world and the odds-on favorite to be the inaugural UFC 125-pound champion. Joseph Benavidez changed all that with a single counter right hand that destroyed Japanese Shooto 123-pound champion Yasuhiro Urushitani on Saturday night.

Benavidez has long been viewed as a title contender, though as 135 pounds, not 125 pounds. In 17 professional fights heading into Saturday night, the Team Alpha Male standout had but two losses. Reigning bantamweight champion Dominick Cruz owns both of them. Nobody else solved the Benavidez riddle at bantam, so I was a bit surprised to see him labeled as the number three guy (behind McCall and Demetrious Johnson) in the four-man flyweight tourney. The win over Urushitani, particularly in light of the stalemate between McCall and Johnson, elevates Benavidez to the odds-on favorite, in my opinion, heading into the championship bout.

JOHNSON-MCCALL SCORING ERROR THROWS A WRENCH INTO THE TOURNAMENT

We need to crown a champion in the newly minted 125-pound division, which is why UFC President Dana White arranged for the four-man tournament that began on Friday night. Unfortunately, the world will have to wait longer than anticipated because Johnson and McCall still have unfinished business.

I obviously know that Johnson was announced as the winner in the Octagon following the fight. The result appropriately drew a raucous response from the crowd. Hearing Johnson named as the winner certainly stunned me. I had McCall a 29-27 winner. He completely dominated the third round, resulting in a 10-8 score on my card, whereas I split the other two rounds between the guys. But the first round was close enough that I can’t really complain about anyone scoring it even or one point in favor of either fighter. However you score that first round, I still think McCall deserved the win.

Nevertheless, I’m going to skip the expected diatribe on the need for quality judging because the controversy wasn’t solely their fault this time. Instead, Craig Waller, the Executive Director of Combat Sports Authority of New South Wales, shares in the blame. He simply failed to correctly tabulate the judges’ cards. Johnson did not win. The fight was scored a majority draw.

To his credit, Waller has stepped up to take ownership of his mistake. Hey, we are all human. Mistakes happen. Maybe a calculator is in order next time. Or, better yet, maybe there should be a procedure in place where someone has to check the math to avoid this type of situation in the future.

Had someone checked the scoring, the combatants would have come out for a fourth round. Unlike with most other UFC fights, the tournament bouts were supposed to be draw-proof by implementing a fourth round where the judges had to decide a winner, regardless of how the action unfolded in that final stanza. But the mistake wasn’t identified until after the result was announced, so it was too late to rectify the situation.

Depending on the timing of the rematch and the condition of the winner, Benavidez, not Johnson, may end up being the big loser in this whole situation. Johnson has to rematch a guy that he clearly struggled with, but Benavidez may be forced to sit on the sidelines for longer than he would like while Johnson and McCall finish what should have been finished on Saturday night.