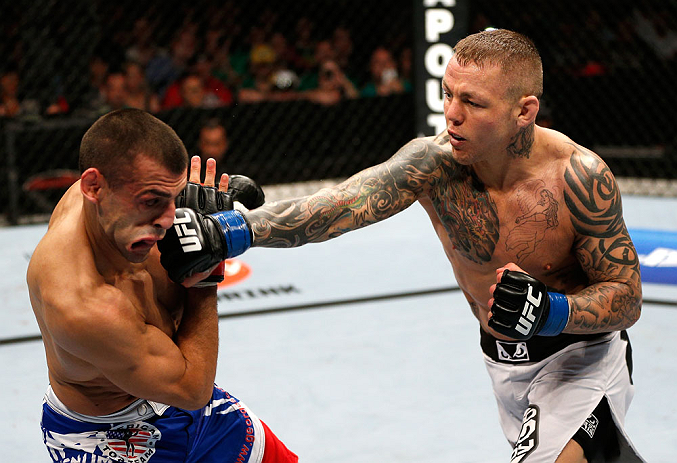 It's a showcase of international talent from around the world on display at UFC on FUEL TV 9 this weekend, and although there has been a change to the main event, a light heavyweight showdown will still lead the card Saturday from Sweden.

In addition to the main event, a legendary last name gets back in the Octagon as Ryan Couture debuts after moving to the UFC from Strikeforce to face former Ultimate Fighter winner and TUF: The Smashes coach Ross Pearson, while heavyweights Matt Mitrione and Phil De Fries both look to get back on track after recent losses.

There's also a very intriguing bantamweight matchup between one of Dana White's favorite fighters to watch - Brad Pickett - as he takes on "The Hulk" Mike Easton.

With the closing to the upcoming UFC Pick ‘Em game for UFC on FUEL TV 9 just days away, let's look at a few of the key fights to keep an eye on this weekend:

1) Being a late replacement is always a tough job for any fighter, but for Ilir Latifi he may have been handed a golden sack of coins in one hand and a stick of dynamite in the other. Latifi replaces his teammate Alexander Gustafsson on just four days notice with the tough task of facing former Strikeforce champion Gegard Mousasi this weekend in Sweden. The golden opportunity is because no one knows Latifi and he has a chance in a single fight to put his name on everyone's radar. The dynamite however comes in the form of one of the best light heavyweights in the sport. Mousasi is an assassin on the feet, with pinpoint accuracy and knockout power in every appendage he throws at an opponent. Latifi is a solid wrestler, so that could help him on short notice facing Mousasi, who has struggled against grapplers in the past, but it's no easy task to take the Dutch-trained fighter to the mat. Mousasi will be a huge favorite here, and because it's his debut fight, a win will earn you another 40 points. He's going to be a very popular pick, so the rest of the card then becomes key.

2) It's only been one fight since Ross Pearson returned to lightweight, but the British-born slugger showed why he made a name for himself at 155 pounds before tinkering in the featherweight division for a couple of fights. Pearson demolished fellow Ultimate Fighter coach George Sotiropoulos in his last bout, and throughout his lightweight career he's always been a dangerous fighter on his feet. Pearson has out-landed every single opponent he's ever faced at 155 pounds while standing, and he also has the third best significant strikes landed per minute in UFC lightweight history. Pearson is a machine, throwing in great volume and never slowing down. Couture is also a very accurate striker, holding the crown for the best in that category in Strikeforce history. Still, Pearson's power and accuracy could give Couture nightmares in this fight, and at the volume he throws it could be a long night for the former Strikeforce competitor.

3) Whenever heavyweights get in the cage, the judges are rarely involved. Matt Mitrione hopes to bounce back after a tough loss in his last fight, and he's got the weapons to take it out on opponent Phil De Fries this weekend. Mitrione is as athletic a heavyweight as there is in the UFC, and when you add in his quickness and explosive striking he's a tough fight for anybody. Mitrione has great accuracy when striking (5th highest in the UFC's heavyweight division) and his defense is the best in the entire weight class. He also strikes at a distance and avoids the clinch, which is probably where a grappler like De Fries will want this fight to take place. Also unfortunately for De Fries, his two losses in the UFC have both come from heavy-handed strikers, and he's facing another one in Mitrione this weekend.

4) One underdog to keep an eye on this weekend is former Ultimate Fighter competitor Akira Corassani. Now, he's got an awfully tough fight in front of him, as Robbie Peralta comes storming into Sweden with an unblemished record in the UFC and serious knockout power at 145 pounds. Still, Corassani is a tough-as-nails fighter who travels home to Sweden for this card. He also spends his days and nights training under legendary coach Renzo Gracie as well as working with former UFC champion Frankie Edgar and striking phenom Edson Barboza. It's a tall task to tackle facing an up and coming prospect like Peralta, but with underdog points on the line Corassani might be the way to go.

5) A tight matchup could end up stealing the show when Marcus Brimage takes on proud son of Ireland Conor McGregor. Coming into the fight, McGregor has become a very hot prospect who has fought and won titles in two different weight classes in the past. He's a nasty striker that throws from all angles and can put an opponent's lights out in an instant. That said, Marcus Brimage has been here before. He wasn't supposed to beat Maximo Blanco, and he did. He wasn't supposed to beat Jim Hettes and he did. Brimage knows what to expect and he's never one to back down from a challenge. This fight will be no exception. Brimage has taken on strikers and grapplers recently and out dueled them both. He could easily give McGregor a very rude welcome to the UFC this weekend in the same manner.