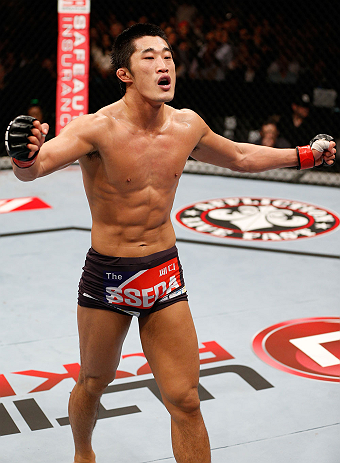 There's no rest for the weary in the fight game, so just a week after UFC 157 last Saturday, the UFC returns to the Land of the Rising Sun with UFC on FUEL TV 8 from Japan.

There are more than a few tight matchups on this card so picking the exact round or method of victory will be ultra important for this show, not to mention four different fighters making their UFC debuts.

Let's take a look at a few of the key fights that could mean the difference between victory and defeat in the latest UFC Pick Em' game for UFC on FUEL TV 8:

1) If you love knockouts, the main event is tailor made for that finish. Both Brian Stann and Wanderlei Silva are artisans of the knockout, with Silva having the most combined KOs and TKOs in UFC / PRIDE history (18), while Stann has finished 10 opponents, with eight of those wins coming by first round KO or TKO. Both of these fighters are finishers, so it's not likely this one will see the later rounds, but Silva has gone the distance with competitors like Rich Franklin over the last couple of years, so anything is possible. It's been nearly five years since Stann lost by knockout, but Silva has suffered four KOs or TKOs in his last seven defeats. When big punchers come to fight anything can happen, and Stann and Silva certainly define those roles. This one may come down to who can land the best one shot of the fight, and who has the better chin. The numbers side slightly with Stann judging by recent fights, but never count out the heart and determination of Wanderlei Silva.

2) Diego Sanchez returns to the lightweight division for the first time since 2009 when he takes on former PRIDE champion Takanori Gomi. Sanchez is a machine when it comes to conditioning and his ability to push forward during a fight. Sanchez has the third most takedown attempts in UFC history and the numbers show when he stays busier than his opponents in landing total strikes he's always victorious. Stylistically, Sanchez is favored in this fight because his wrestling and grappling style could give Gomi fits. Add to that the fact that Sanchez has never been finished in his entire career, and it starts to show that he's got a great shot of avoiding Gomi's heavy hands and pulling out a decision or potential submission win.

3) The fight between Dong Hyun Kim and Siyar Bahadurzada is one of the most interesting stylistic matchups on the card. Kim, who has traditionally been a grappler in the past, has worked tirelessly to improve his striking, showing that in his fights against Paulo Thiago and Sean Pierson. His bread and butter however is the ground game, where he's overwhelmed opponents like Nate Diaz, Amir Sadollah and TJ Grant. Bahadurzada is a vicious, powerful striker who only has one fight in the UFC but a resume that is a highlight reel of finishes. When picking this fight choose wisely because it's likely either Kim will grind out a decision by putting Bahadurzada on his back, or the Afghanistan native will land another nasty knockout to add to his record.

4) One underdog to keep an eye on for this fight card is bantamweight Bryan Caraway. The former WEC fighter and Ultimate Fighter hopeful makes his second trip to 135 pounds, but he has a very tough test in front of him in former WEC title contender Takeya Mizugaki. Make no mistake, Mizugaki has faced the best of the best at 135 pounds and he's hung tough with all of them. Still, Caraway's wrestling and tenacity could give Mizugaki problems in the clinch as he stays away from the Japan native's knockout power. For an underdog pick, Caraway is solid in this slot.

5) Alex Caceres is another interesting fighter to watch on the UFC on FUEL 8 prelims. Taking on newcomer Kyung Ho Kang, Caceres faces a more experienced fighter in every way except where this one counts – in the UFC. Caceres has looked very solid at bantamweight thus far, and as he continues to develop he's an interesting star on the rise. Kang is no pushover, but in his UFC debut he faces a confident fighter who has won three out of his last four fights with the defeat coming by way of a controversial split decision.