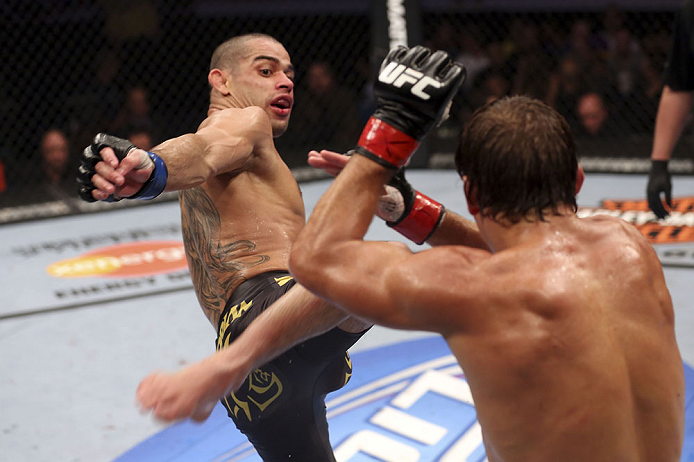 UFC on FUEL TV 7 not only features the first ever championship bout broadcast on the network, but it showcases some of the closest matchups on one card so far in 2013. Every fight is expected to be closely contested, including the main event pitting interim bantamweight champion Renan Barao against up and coming star Michael McDonald.

With a total of 12 fights on the card, FightMetric has listed a total of five as tight matchups, with only one fight featuring a serious underdog. That means getting everything correct, down to the method of victory and round will be extra important for this card taking place in England on Saturday.

Here are a few key points to watch for UFC on Fuel 7 as you make your picks for UFC.com/Fantasy:

1) Renan Barao and Michael McDonald present some interesting contrasts when it comes down to their main event fight on Saturday. Barao has the best takedown defense in UFC/WEC history, with a whopping 95-percent success rate of stopping his opponents from taking the fight to the ground. He's faced some great wrestlers during that time as well, including Scott Jorgensen and Urijah Faber, so it's no illusion that he can stop the fight from going to the ground if that's his intention. Michael McDonald has a good wrestling game, but typically his best weapon is a quick finish. He's had 12-first round finishes either by submission or knockout in his career. The problem McDonald might have in this fight is time – he's never seen the fourth or fifth rounds of a fight, and as time wears on, if he can't put Barao away early, he may be in trouble late. Add to that the fact that McDonald has been out since last April and it would seem that if this fight makes it past round two, Renan Barao could look pretty good as a fantasy pick.

2) Chances are if you're watching the fight between Jimi Manuwa and Cyrille Diabate, you're going to see a knockout. Both fighters come from standup backgrounds, with Manuwa holding 12 wins in his career, 11 by knockout, while Diabate is a former professional kickboxer who actually holds a win in that sport over UFC middleweight contender Michael Bisping. If Manuwa can get inside of Diabate's long reach (he stands 6'6" tall), he has the power and strength to put this fight away within the distance. Diabate can easily fire back with his own striking, but he has to keep it tactical and technical. If a slugfest ensues, Manuwa will likely stand victorious.

3) One prospect to watch on this card is Iceland native and Renzo Gracie black belt Gunnar Nelson. This grappling prodigy has long been touted as one of the sport's rising stars, and now that he's in the UFC he has the chance to prove it. He quickly dispatched of UFC veteran DeMarques Johnson in his last fight, but his second bout could be tougher. He faces UFC and Strikeforce veteran Jorge Santiago, who returns to the Octagon for the first time since 2011. This is also Santiago's first fight at welterweight, so the weight cut could be an issue in this one. Nelson is the fighter to watch here, so he could be a big favorite to most fantasy voters, but don't sleep on Santiago. He's faced much stiffer competition than Nelson throughout his career, and while he has defeats on his record, he's lost to only the best fighters in the world. If Nelson is the overwhelming choice going into the card, Santiago might be a good sleeper pick if you want to risk it.

4) Another tight matchup on the card features light heavyweights James Te Huna and Ryan Jimmo, who both look to gain ground in the 205-pound division with this fight. Te Huna is a knockout artist who has painted his canvas with the suffering of his opponents in seven of his last eight wins. Jimmo is no slouch in that department either especially considering the seven second knockout he picked up in his UFC debut. Typically however, Jimmo is a more controlled, disciplined fighter who can outpoint his opponents over the course of 15 or 25 minutes. Te Huna is nasty with his punching power, and if he can hurt Jimmo early, look for a first round finish courtesy of the New Zealand native. The longer the fight goes however, Jimmo could take control.

5) Submission specialist Paul Sass returns to face Danny Castillo after both suffered losses recently. Prior to his loss to Matt Wiman last September, Sass had a perfect 13-0 record with a bevy of submission wins to his credit. Castillo comes into the fight with knockout power in his hands, but wrestling as his bread and butter. That could make all the difference in this fight because Sass has put away more than a few wrestlers in his time, including Jacob Volkmann and Michael Johnson – both of whom hold wins over Castillo in the UFC.

Visit UFC.com/Fantasy to get in on the action and make your picks today