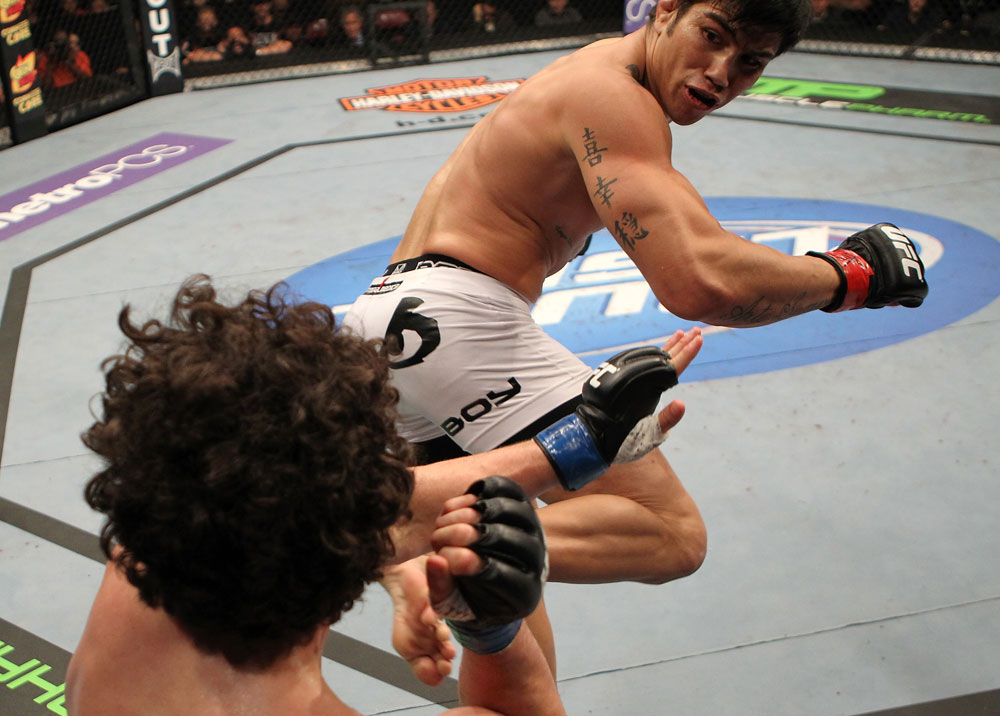 The UFC heads back to Brazil this week for UFC on FUEL TV 10, featuring a rematch between two of the best heavyweights in the sport, while also showcasing some of the best and brightest from the South American country.

It's been seven long years since Antonio Rodrigo “Minotauro” Nogueira first met Fabricio Werdum in PRIDE Fighting Championships. In that fight, Nogueira got the best of a younger, inexperienced Werdum, but now with both veteran fighters competing in the Octagon after coaching against one another on The Ultimate Fighter Brazil 2, the rematch is expected to be fireworks.

In today's UFC Pick ‘Em Fantasy preview, we focus on the main card, including the headline fight, which pits one of the greatest heavyweights of all-time against a fighter hoping to stake his claim to the UFC belt in the next year.

1)    There may not be two fighters more evenly matched in the heavyweight division than those in the main event between Antonio Rodrigo Nogueira and Fabricio Werdum. First things first, don't even bother looking at their first fight. It was in 2006, and while Werdum's record read ten professional fights, his experience level was like Triple A compared to Nogueira's World Series like career at that point. Now seven years later, Werdum is not only a threat to Nogueira - he's a threat to the entire heavyweight division. Werdum is a submission specialist just like his opponent, but he's worked tirelessly on improving his striking game as well. As showcased in his fight with Roy Nelson, Werdum has developed bricks in his hands and a dangerous Muay Thai kickboxing game as well. Werdum lands with 52.6 percent accuracy on the feet, and while his opponent has some of the best boxing in the sport, it's diversity that wins out here. Expect Werdum to mix things up on the feet, tagging Nogueira with quick, heavy shots. Nogueira is one of the toughest competitors in the UFC, and while he's been finished before, his adrenaline will be running full bore fighting at home in Brazil so don't expect him to go away easy. Werdum will do his best to drag Nogueira into deeper and deeper waters as the fight goes on, and either finish him late or run away with a decision on the judges' scorecards.

2)    The co-main event will match two heavy-handed strikers when Thiago Silva meets Strikeforce transfer Rafael "Feijao" Cavalcante. Both fighters have a lot on the line, so a win is crucial and neither man will stop until the job is done or they are finished. Feijao comes to the UFC after a year away from the sport, while Silva is in desperate need of a win after going 0-2 with 2 no contests in his last four fights. This is a hard fight to pick because when looking at the two fighters in terms of statistics they are almost dead even in every category. What may make the biggest difference in this fight comes down to the pressure of the moment. Throughout his career, Silva has struggled when facing top ten fighters in the UFC light heavyweight division. His losses in the UFC are to names like Rashad Evans, Alexander Gustafsson and Lyoto Machida - by any means not bad losses, but he's still never defeated a ranked, top ten opponent inside the Octagon. While this is Feijao's first fight in the UFC, he has that kind of talent. Feijao is a fierce striker who has landed at 58 percent accuracy in his last 10 fights, and he's a finisher. Feijao has never, ever had a fight go to the judges. Feijao is an aggressive, nasty striker who trains every day with UFC middleweight champion Anderson Silva. Feijao is a name to watch at 205 pounds in 2013, and it starts with his fight against Thiago Silva.

3)    If there's an upset to watch for on the main card it could come in the fight between Erick Silva and Jason High. Make no mistake, Silva is the real deal, with knockout power in both hands and he's not one to take lightly. He's also got the kind of ability to get up from the bottom that gave highly regarded wrestler Jon Fitch fits when they fought in 2012. Still, it's hard to ignore that High has a great grappling background, and has faced and beaten great strikers before like current UFC welterweight Jordan Mein. High has been itching for a fight since he last stepped foot in the cage in July 2012, and he trains with a great crew of fighters including another 170-pound standout in Tyron Woodley. With +175 bonus on the line, High may be worth the risk in this upset special.

4)    It's never easy to fight a Brazilian in Brazil - just ask the long list of foreign fighters that have traveled there in the last couple of years only to walk out with a loss on their records. Mike Wilkinson might be the next one to join the list when he face TUF Brazil season one veteran Rony Jason in the lead off fight for the UFC on FUEL TV 10 card. Jason is a fierce striker that feels like a throwback to the early days of Wanderlei Silva and Maurcio "Shogun" Rua. Training under the Nogueira brothers, Jason also has a wealth of ground experience to his credit as well. Jason was a force during his season of The Ultimate Fighter, and that reign of terror should continue on Saturday as well. If Jason starts fast, this one may not make it to the second round.