Michael DiSanto weighs in on Ellenberger, Herman, Scoring, and more... 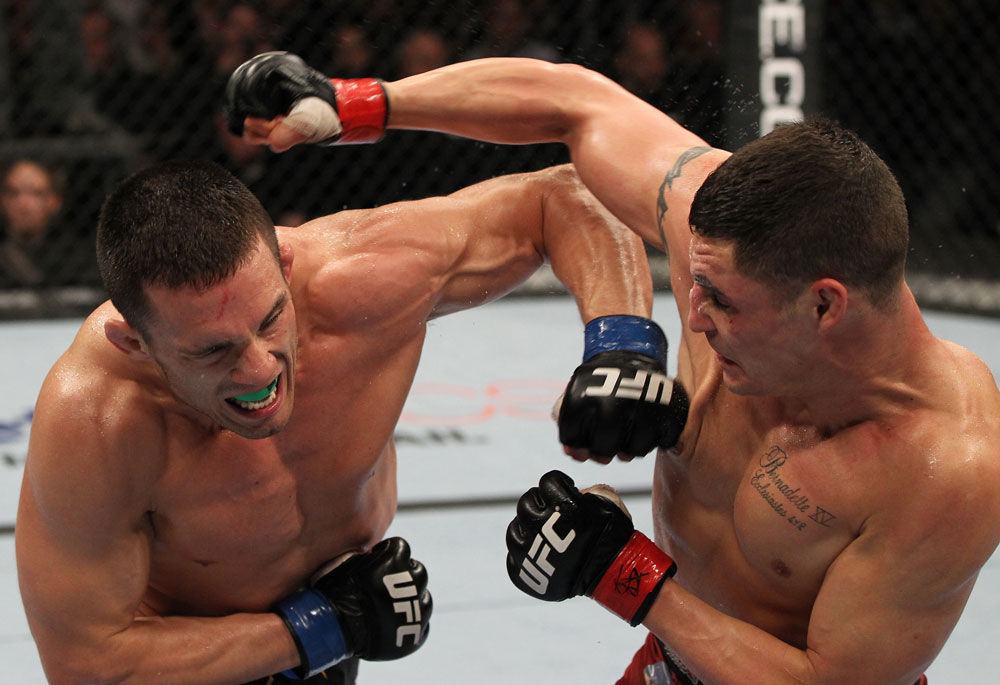 Jake Ellenberger added to his rapidly growing win streak by overwhelming a game Diego Sanchez on Wednesday night. It was an easy fight to score. Ellenberger controlled the action on the ground and on the feet through the first two rounds. A spirited rally by Sanchez wasn’t enough to offset the 10-minutes of effective work Ellenberger put in during the early parts of the fight. But the back-and-forth was enough to earn each man a $50,000 check for the “Fight of the Night” award. WATCH FIGHT HIGHLIGHTS

Ellenberger now has six consecutive wins on his resume, after suffering a loss in his UFC debut. Think about it for a moment. Other than Nick Diaz’s multi-year winning streak that recently got abruptly ended courtesy of Carlos Condit, who else in the division has put together a run over the last couple of years that is more deserving of a number one contender standing than Ellenberger? Jon Fitch? No. Josh Koscheck? No. Sanchez or maybe Thiago Alves? Certainly not. Jake Shields or Johny Hendricks? Try again.

For my money, Ellenberger now stands alone behind Condit in the 170-pound pecking order. It will be interesting to see if the interim champion chooses to take an optional defense, or if he will sit on the sidelines and wait for the true welterweight kingpin, Georges St-Pierre, to return from a torn anterior cruciate ligament. That decision will likely impact whether Ellenberger gets the much coveted first shot at Condit or if he will need to win yet another fight in order to secure a shot at UFC gold.

My guess is that Condit will wait, rather than risk his pending bout with GSP. I wouldn’t advise him to go down that path, but all signs seem to be pointing in that direction right now, which means Ellenberger will likely fight in an official title eliminator next. Could that be a bout with the winner of the May 5 bout between Kos and Hendricks? Sounds like the perfect matchup to me.

Man, Dave Herman is one furry guy. From the bushy beard that extended down to his Adam’s apple to the body-hair sweater he rocked inside the Octagon, I don’t think I can recall someone who has recently competed in the UFC who more closely resembled Bigfoot. Andrei Arlovski could also be confused for a Wookie when he doesn’t partake in the phenomenon that has become known in recent years as “manscaping.” But he doesn’t quite rise to Herman’s level in the Bigfoot look-alike contest. WATCH FIGHT HIGHLIGHTS

The crazy amounts of fur may have been exaggerated because Herman was competing against a guy who could easily be confused with Mr. Clean. Stefan Struve appeared hairless from head to toe. It was quite the contrast in human appearance.

Of course, none of that is relevant to the actual fight. Herman’s bushy beard did not save him from getting knocked out. And the sweater didn’t factor into the outcome, other than possibly contributing to a good warm up. Yet, a day later, Herman’s physical transformation remains the most memorable part of what was a pretty entertaining fight.

SIMPSON-MARKES HIGHLIGHTS THE WEAKNESS IN THE CURRENT SCORING SYSTEM

Mixed martial arts is a tough sport to judge. No question about it. But I’m struggling to understand a few of the scorecards.

Aaron Simpson nearly knocked out Ronny Markes in the first round of their contest. He also dished out a pretty good beating on the ground – to the tune of 19 unanswered ground strikes. WATCH FIGHT HIGHLIGHTS

The second round was a much closer round. Neither man really hurt the other. The only significant moment was a takedown by Markes, but he didn’t do much with the takedown, aside from landing a couple of decent ground strikes that were a far cry from the frequency or savagery of Simpson’s ground strikes in the opening round.

In the absence of any other differentiatior, a takedown is certainly an appropriate data point to determine the winner of a particular round of completion. But was it enough to justify awarding Markes the same score that the judges awarded Simpson one round earlier?

The easy answer is the score was absolutely appropriate under the current scoring system. Markes won the round. A 10-10 score in the second would have been a complete travesty. Similarly, a 10-8 round for Simpson in the first would have been a crazy outcome. So, what other choice did the judges have, other than scoring the fight even through two?

I think those two rounds perfectly illustrate the need for a new scoring system, one that takes into account squeaking out a round versus nearly getting knocked out or submitted versus taking a savage five-minute beating.

The issue, of course, is that I don’t really know how to score the round, apart from the 10-point must system. Do we add half points? Is there a different answer?  I don’t know. I only know that there has to be something better than the current status quo.

HAS MENJIVAR FOUND HIS GROOVE?

Ivan Menjivar was going nowhere fast when the calendar turned to 2011. The Salvadorian mixed martial artist entered the year having lost three of his last four fights, including his long-awaited debut in the bantamweight division. Honestly, it seemed like he was on a fast track to the mid-major shows. WATCH FIGHT HIGHLIGHTS

Then something happened. I don’t know what it was. But Menjivar found something. Three fights. Three wins, one by each flavor (submission, decision and knockout).

Menjivar is now 3-1 as a bantamweight. After a career spent fighting much larger guys, he finally seems to have found his true home competing against guys who are closer to his natural size. Another win could very well put him into title contention.

If we are being honest with ourselves, the bantamweight division remains a work in progress, in terms of pecking order.  Sure, there’s reigning champion Dominick Cruz, and former champion and MMA poster boy Urijah Faber is the next in line. Renan Barao arguably stands third. After that, it is anyone’s guess.

Does Menjivar’s three-fight winning streak put him in that next level below Barao? Or, does he need a bigger body of work, after suffering a rough 2006 that lead a temporary retirement that lasted nearly four years?

You tell me. Spell it out in the comments below.