Court McGee vs. Ryan LaFlare
After some testing boxing from both fighters, LaFlare got his first takedown 45 seconds in and his second 15 seconds later. McGee caught a kick and tipped LaFlare to the mat late in the round, but everything else and in between was a boxing match peppered with knees to the body from LaFlare and uppercuts there from McGee.

The southpaw LaFlare’s striking opened up more in the second, as he opened up with more punches, dodged many of McGee’s strikes, scored with kicks and got two more takedowns. McGee managed a single-leg, but was otherwise kept at bay by LaFlare’s long strikes (one of which also opened a productive cut on McGee’s forehead).

McGee was more diverse in the third, moving forward, outboxing LaFlare and bullying him to the mat and against the fence. LaFlare still had counter jabs and long kicks, but he seemed to lose a bit of steam under  the volume and variety of McGee’s attacks. A late-round guillotine attempt put McGee on top and likely cemented the round for him, though it wasn’t enough to push scores into his favor.

The fight started with lightning-fast jabs and kicks from the Muay Thai denizen Barboza, with Castillo countering with takedown threats. But it was a big right hand from Castillo that wobbled Barboza, and Castillo swarmed, throwing punches against the fence and getting an easy double-leg. Castillo mounted Barboza and sunk in a rear-naked choke when Barboza rolled away from punches, but Barboza held the fence to spin and escape. Castillo postured up and continued to rain down punches, bloodying the Brazilian’s face as the hometown crowd screamed. Barboza pulled Cascastillo into his guard and tried for several submissions, but each time, Castillo used strikes to power out of them.

Barboza wasted no time unleashing his full arsenal of leg kicks in the second: body kicks, spinning kicks, and a dozen or more of his devastating leg kicks. Castillo kept the center of the Octagon but had all of his takedown attempts thwarted, his office reduced to wide body shots as he moved in. Castillo finally fell from a left hand, and Barboza dove for an anaconda, but lost it 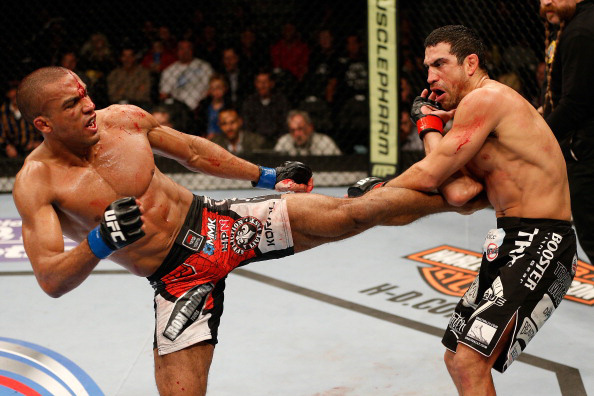 and allowed Castillo to his feet before the bell.

Castillo chased with left jabs and lunging straights for the entire third round, but his shots and takedown attempts were weakened from the damage to his lead leg. Another leg kick caused Castillo to visibly wince, and Barboza pursued, but the tough Castillo soldiered on and kept his distance. A right hand and a spinning back kick pushed Castillo backward, and he even got a late-round takedown, but the real story of the round –as is the case with so many of Barboza’s fights – was the whipping, merciless leg kicks.

Scores for Barboza (13-1) were 29-28 twice and 28-28. "I really felt his power in that first round," said Barboza. "I was just trying to survive to get to a new round. My corner told me after the first round I needed to win the next two rounds, so that’s what I did. Every time I step in the cage, it feels like home. Even though his home  is here in Sacramento, I never felt like I wasn’t home too."

"I really felt his power in that first round," said Barboza. "I was just trying to survive to get to a new round. My corner told me after the first round I needed to win the next two rounds, so that’s what I did. Every time I step in the cage, it feels like home. Even though his home is here in Sacramento, I never felt like I wasn’t home too."

Green toyed with Healy throughout round one, standing with his hands down, goading him forward, dodging Healy’s punches and shaking his head and laughing when Healy missed. In return, he landed long jabs and right-lefts regularly. Twice in the first, Healy backed his quarry against the fence and got a double-leg, but Green quickly stood back up and got to the center. Healy found his range toward the end of the round, and he and Green stood and traded shot-for-shot for much of the last minute. 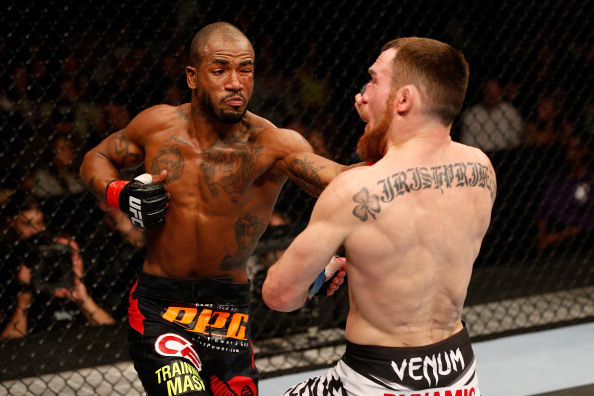 Green’s striking was even sharper after the break. In between showboating, he landed sharp jabs and a huge right. Healy still came forward, but it was Green who got the bodylock tried for his own takedown next. A frustrated Healy charged and finally got a slam. Green escaped and teed off against the cage, Healy’s face showing the damage.

The relentless Healy kept coming forward in the third – except when Green’s punches literally pushed him back – but Green continued to get the better of the striking and defend most of Healy’s takedowns. Healy did drag things to the ground once, but Green shook him off his back, stepped over him and took Healy’s back, keeping him pressed against the fence before getting his own takedown. Green tried to take Healy’s back but wound up with him in guard; Healy threw ground-and-pound for the final seconds, then stood and raised his hands in victory at the bell.

Jorgensen moved forward through much of the first, tagging his southpaw opponent with a big left, but after eating two lefts, a big uppercut and a knee, he backed off. Jorgensen avoided the takedown attempts of the former Div. 1 wrestler early, but late in the round, Makovsky pulled guard off a scramble and then deftly reversed to end the stanza on top.

Both men managed takedowns in the second, which consisted of several prolonged, high-level 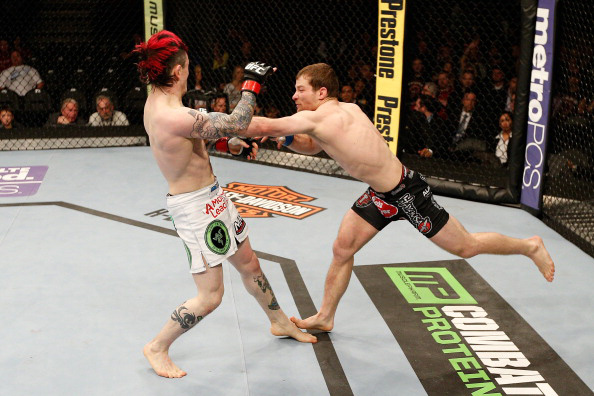 scrambles. Jorgensen nearly pulled off a guillotine, but Makovsky seemed to be the faster and more powerful throughout.

After more blow-for-blow standup in the third, Makovsky scored with a big takedown, but it was Jorgensen who wound up in top position before being reversed. Makovsky tried to take Jorgensen’s back and pull him backward, but Jorgensen escaped out the back and returned to his feet, where he knocked Makvosky’s head back with a big right. Makovsky got one more takedown, was briefly swept and wound up in mount, finishing the bout on Jorgensen’s back.

Philadelphia’s Makovsky improves to 17-4 in  his UFC debut; Jorgensen--who ran out of the Octagon after the decision was read--now stands at 14-8.

McKenzie lunged for the early takedown, but Stout managed to move to the fence and stand back up, avoiding McKenzie’s signature guillotine on the way up. McKenzie tried to drag Stout back down, and the two swung across the Octagon briefly before McKenzie trapped Stout against the links. But once Stout reversed, he took over, maintaining space and punishing McKenzie with his signature sharp combinations and kicks.

McKenzie stood southpaw in front of Stout, his hands down, wearing brand-new shorts – referee Herb Dean actually pulled the price tag off when the two were on the ground -- with no sponsors. Stout answered each of the taller fighter’s sloppy strikes with one of his own that landed, tipping McKenzie to the mat serveral times and forcing him to stand. He target-hunted with body shots, spinning kicks and power straights, deftly sprawling when McKenzie shot and kneeing him when legal. Stout even threatened McKenzie with one deep guillotine of his own, eventually letting McKenzie up and throwing a hut uppercut on his way up. McKenzie moved backward most of the fight, forcing Stout to chase him, but had little discernable offense, drawing Stout’s ire in the form of faces and repeated body shots.

Stout improves to 21-9-1 in his 17th Octagon appearance; McKenzie is now 14-4, with all four of his losses coming in the Octagon. "I wanted to make him work hard but my timing was off a bit in the first round," said Stout. "I played it safe and made sure the fight was in my world and not in his because he is dangerous with submissions."

Abel Trujillo vs. Roger Bowling
The August bout between lightweights Abel Trujillo and Roger Bowling ended in a mid-fight no contest due to an illegal knee from Trujillo. In their rematch, Trujillo needed even less time and no technical fouls to finish Bowling, earning a TKO in the second round.

Trujillo bobbed and weaved around Bowling, dodging most of the boxer’s power punches but answering with his own. His right hand connected multiple times and he also finished two 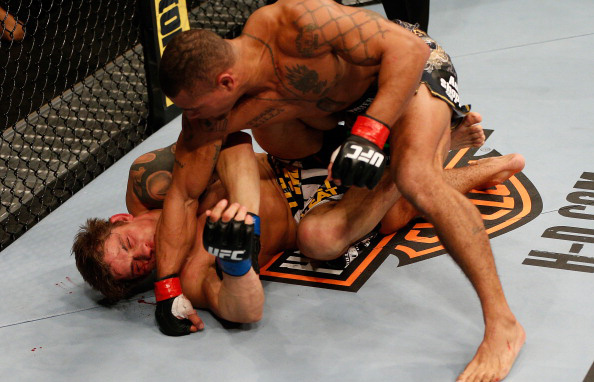 takedowns and damaged Bowling from top. Trujillo also threw knees to the body every time the two were in close quarters.

Bowling dropped Trujillo early in the second with a leg kick, but Trujillo landed on top in side control, and from then on out, the fight was his. He caught the next kick Bowling threw, took things to the mat, and landed heavy ground-and-pound from top position. Bowling survived, but as he tried to stand, Trujillo poured it on, with Bowling on his knees and bleeding badly, much the way their last fight had ended – but with no questionable knees. Bowling made it to his feet but Trujillo followed with strikes that Bowling couldn’t answer, forcing referee John McCarthy to intervene at 1:35 of the round.

Trujillo, who trains with the Blackzilians, improves to 11-5 (1 NC) and scores his sixth knockout win. “I was making a statement with this fight," said Trujillo. "I had to finish him to make that statement. It hurt me not to get a win in the first fight. Beating him was like conquering a demon."

Ohio’s Bowling, a Strikeforce standout, slips to 11-5 (1 NC) and was brutally honest about his performance: “I came out flat and I got whooped as a result.”

Darren Uyenoyama vs. Alptekin Ozkilic
Debuting flyweight Alptekin Ozkilic used power and evasion to nullify Darren Uyenoyama’s dangerous guard, earning a split decision in in the night’s first bout, which aired online.
Uyenoyama was busier, with takedown attemps, front kicks and an active rubber guard, but Ozkilic got some damaging ground-and-pound through. Ozkilic defended many of the black belt’s takedowns attempts and tried a few submissions of his own, but several times he chose to simply back out of Uyenoyama’s guard and stand.

Ozkilic defended even more of Uyenoyama’s bottom game with strikes in the second, getting out of a triangle attempt and answering a flashy tornado guard takedown attempt with a solid punch. Ozkilic seemed baffled by Uyenoyama on the feet and hesitated to close the distance; time after time, Uyenoyama dove takedowns, made contact with with Ozkilic and pulled guard.

A big right hand from Ozkilic stumbled Uyenoyama early in the third, and Ozkilic followed relentlessly against the wall. But Uyenoyama got the clinch and threw some knees before pulling things to the mat and trying for an armbar. Uyenoyama then threw a high spinning kick that missed, and Ozkilic followed with more powerful right hands. Uyenoyama continued to pull guard every time he got close enough to do so, but his submission attempts were futile in the wake of three rounds’ worth of sweat.