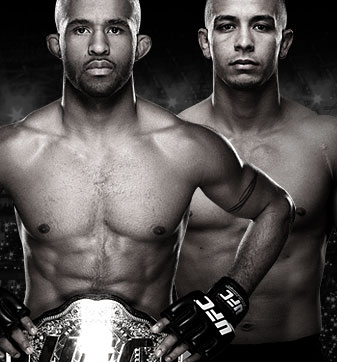 The flyweight title will go up for grabs once again at the next major UFC on FOX card coming up on July 27, as champion Demetrious Johnson looks to make his second successful defense when he faces challenger John Moraga.

UFC on FOX 8 will also feature a showdown between two top ten welterweights as Jake Ellenberger squares off with Rory MacDonald.

The main card is stacked with talent as well, and there should be no shortage of fireworks with names like Robbie Lawler and Liz Carmouche competing.

Today's UFC Fantasy breakdown will focus on the main card fights coming up this Saturday from Seattle.

1)    The main event at UFC on FOX 8 has the potential to grab some serious points in the fantasy game this week, but it comes with the risk of picking the underdog to get there. Moraga is coming into the fight not only as the challenger, but as a heavy dog to the champion, so if you pick him and he wins, there's an extra 175 points in it plus the normal 150 bonus for the main event.

The problem is that Moraga is still a bit of an unknown when it comes to what he'll produce in his first UFC title fight. He's only two fights into his UFC career, and this will be by far his biggest test yet. That’s definitely not to say he's not ready for the challenge, but it's an obvious flaw that has to be recognized. Moraga is a finisher, which he's done impressively in both his fights in the UFC. The only issue there is that Johnson has never been finished and he's gone with the best of the best in both the flyweight and bantamweight divisions over the last few years. Johnson is lightning quick, with cardio that usually punishes opponents as much as his takedowns (he's landed 38 in his UFC/WEC career, second most ever between bantamweight and flyweight). The big stage is not easy to take in no matter how prepared a fighter might be leading up to the moment. Expect Johnson to keep Moraga busy early before dragging him into deep waters late for a decision victory.

2) The co-main event could be the toughest fight to pick on the entire card. On paper, Jake Ellenberger and Rory MacDonald are so evenly matched it's scary. Certainly each has a few weapons that may be slightly better than the other, but when it's all boiled down, they are equally dangerous. The difference could come down to how this fight begins. Ellenberger is a notoriously fast starter and has finished three out of his last five wins by first round stoppage. MacDonald has done his fair share of finishing as well, but he can also wear an opponent out as the time ticks away. Both fighters have tremendous takedown defense (Ellenberger at 93%, MacDonald at 89%) so it's more likely to end up as a standup fight. MacDonald has developed a stinging jab over his last few fights, but he's still trying to find the right combinations to finish opponents on the feet. Ellenberger has no such problem.

This fight really comes down to a gut feeling, and based on the strength of opponents over the last couple of years, Ellenberger still has a slight edge on MacDonald overall. This is truly a coin toss fight, but right now it's landing on Ellenberger.

3) Robbie Lawler draws second-time UFC fighter Bobby Voelker this time around, and it is a fight that will not likely see the judges' scorecards. Both fighters love a good standup fight, and it would appear at least on paper like Lawler and Voelker are ready to put on an explosive show for the Seattle crowd. Voelker has taken on some heavy punchers before, including Roger Bowling and Patrick Cote, but he hasn't faced a fighter with the kind of power and technique that Lawler is capable of showing. Lawler carries dynamite in both fists and if he lands flush, he only needs one punch for an opponent to end up face down on the mat eating canvas. It doesn't help Voelker much that he only has 46% striking defense, which means he does get hit by his opponents. If he gets hit by Lawler, it's probably lights out for the former Strikeforce welterweight.

4) Liz Carmouche looks to bounce back from her loss to UFC women's bantamweight champion Ronda Rousey at UFC on FOX 8 when she takes on newcomer Jessica Andrade. Right away what sticks out most is the fact that Andrade is a first-time UFC fighter with a lot of unknown factors in her back pocket. Now that could easily come in handy if an opponent can't find footage or know much about her. Fortunately for Carmouche, she's able to adapt on the fly and is dangerous no matter where the fight lands. Carmouche was possibly seconds away from taking the belt from Rousey, and has faced the absolute best at 135 pounds. Andrade could earn an additional 400 points as the massive underdog, but that's even a bet too steep to take. Carmouche should be impressive here and make a statement to the rest of the women's bantamweight division.