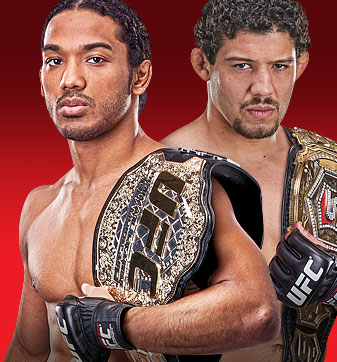 The UFC will return to FOX this Saturday night with one of most anticipated cards of the year taking place, as lightweight champion Benson Henderson battles the last ever Strikeforce lightweight champ, Gilbert Melendez, in the main event.

The entire main card is actually comprised of the UFC's best taking on the brightest stars that once competed under the Strikeforce banner, and it's created some very interesting matchups.
With four fights happening on the televised portion of the show, for today's UFC Pick ‘Em Fantasy Game breakdown we look at the key elements that could mean the difference between victory and defeat.

1)    Benson Henderson and Gilbert Melendez are champions, and going five rounds is nothing new to either of these fighters. With this fight serving as the main event and a title fight, 150 extra points are up for grabs to get this one correct. But in addition to who wins, it's how they win that could play a crucial role in this fight. Henderson has the longest average fight time in UFC history, and loves to drag his opponents into deep water late into the fourth and fifth rounds. His average fight lasts 20 minutes and he's got the cardio to go even longer. Add to that the fact that Melendez has never been finished through 23 fights in his career, and it would seem this title bout could easily be a war of attrition for five full rounds.

2)    In terms of the fight pick for this one, Henderson has been on an incredible run of late, taking on the best of the best at lightweight. He defeated former champion Frankie Edgar twice and put on a stellar performance to beat Nate Diaz last December. Melendez is a champion coming into this fight with a chip on his shoulder and something to prove however. He's been out for almost a year, which never bodes well for a fighter, but he knows this is the chance he's been waiting for years to finally get and now it's here. Henderson is going to be the popular pick and he should be, given his championship pedigree and how he's put together the longest active winning streak in the UFC's lightweight division at six victories. Melendez does possess great takedown defense (stops 76.7-percent of takedowns), which could negate one of Henderson's biggest strengths. If Melendez can stop Henderson's wrestling, he could put together the kind of striking to walk home with the UFC lightweight title. It will be a short walk too because Melendez trains a short time away in the San Francisco Bay Area, which means he may have the hometown crowd on his side as well.

3)    Stylistically, Daniel Cormier could give Frank Mir fits. The former Olympian will make his UFC debut against a legendary UFC heavyweight, and he has all the tools to make quite the debut. On day one in the UFC, Cormier may already be the best wrestler in the sport. Add to that through every fight he ever had in his career, Cormier has never, ever been taken down. On the feet, Cormier is a power puncher that will remind fans of his teammate and current UFC heavyweight champion Cain Velasquez in many ways. Mir moved his training camp this time around to work with famed coach Greg Jackson, but it might not be enough. Throughout his career he's struggled with big, physically strong wrestlers like former champion Brock Lesnar and Shane Carwin. Cormier is very similar, and if Mir can't find a way to drag this to the mat early, he might find himself asleep by the end of the first round. Also, Mir's six career losses have all come by knockout or TKO. Not a good spot to be in against a power puncher like Cormier.

4)    Josh Thomson returns to the UFC this weekend and he's got a tough test in former title contender Nate Diaz. One weapon Thomson has on his side however is his wrestling, and that could give Diaz fits in this fight. Thomson has the third most takedowns in Strikeforce history and the most submission attempts as well. Now it's not likely he'll sink in a fight-ending hold on a Brazilian Jiu-Jitsu black belt like Diaz, but Thomson has the ability to put him on his back and keep him there. Diaz has struggled with wrestlers in the past, losing decisions to Benson Henderson, Clay Guida and Joe Stevenson. The common theme? When they wanted to take Diaz to the mat they did, and he struggled to get up from the bottom. If Thomson employs a similar strategy, he could put Diaz on his butt for the better part of 15 minutes.