Michael DiSanto takes a look back at Saturday's UFC on FOX 6 event... 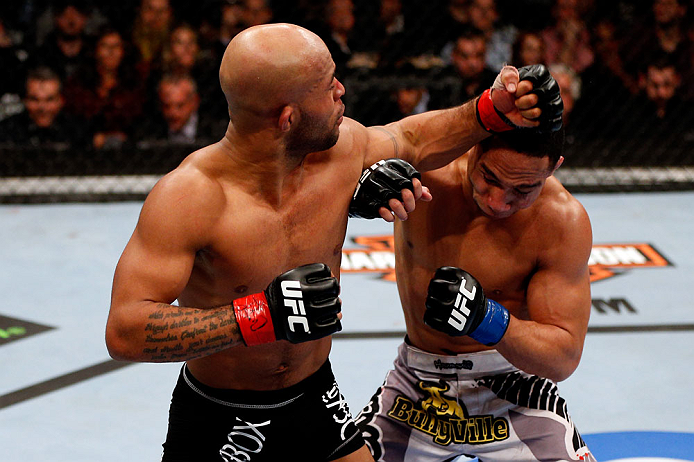 JOHNSON PUTS HIS STAMP ON THE DIVISION

The four best flyweights in the world are Demetrious Johnson, Joseph Benavidez, Ian McCall and John Dodson. Those are the four names. Period.

Johnson has now beaten the other three over the last three fights. Has he cleaned out the division so soon after its creation? Sure, there are others out there who certainly qualify as contenders. Guys like John Moraga, Jussier Formiga, Louis Gaudinot, and John Lineker, among others, fit the bill. But after watching Johnson dismantle Dodson on the heels of his wins over Benavidez and McCall, does anyone give any of those guys a legitimate chance of unseating the champion, if he remains focused and committed to continual improvement?

Dodson may have rendered the sport’s newest male division irrelevant, in an Anderson Silva sort of way. That is the biggest compliment I can possibly give him.

Glover Teixeira has long been one of the best unknown light heavies in the world. Visa issues forced him to spend the last several years of his career competing in relative anonymity in his homeland of Brazil. But that doesn’t change the fact that his guy has sick skills.

Those skills were finally on display against a true A-list opponent on Saturday night. There is no doubt whatsoever that Quinton “Rampage” Jackson is both the biggest name and the best fighter he has ever faced. Yet, Teixeira made things look relatively easy on Saturday night.

I’ve written it before; I’ll write it again. Teixeira is a scary opponent for any light heavy in the world. This guy has big, strong punches, and his submission game is not to be messed with, except for the best in the world. The win over Rampage places him right in the middle of the 205-pound mix.

A great next fight would be the loser of the upcoming bout between Dan Henderson and Lyoto Machida.

THANKS FOR THE MEMORIES, CHAMP

If, indeed, Saturday night was Rampage’s last trip to the Octagon, I’m quite sure that he will eventually look back on his UFC career with great inner conflict. The same inner conflict that he feels when he looks back at his PRIDE days.

On one hand, Jackson was once one of the most talented fighters the sport has ever seen. His punching power was second to none. His physical strength, evident by his crowd-pleasing slams back in his Japan days, was awe-inspiring. His jaw was sturdy and trustworthy. And his ability to thrill the crowd with his spectacular skills earned him untold millions.

But there was another side to Rampage’s career, as well. One that wasn’t quite so pretty. His warrior spirit was unquestioned, but he often slipped out of the bushido lifestyle in between fights. Whether due to hubris, apathy toward continual improvement or simply his love of life outside of the sport, he allowed himself long stretches out of the gym. His weight would balloon. Training camps became as much about losing weight as honing his skills. Not to mention decisions he will forever question, like fasting before his rematch with Mauricio “Shogun” Rua.

The inner conflict will eventually hit him when he realizes that he could have set the standard for 205-pound greatness. Chuck Liddell defined the light heavyweight division during his iconic UFC championship reign. Wanderlei Silva will forever be remembered as the greatest 205-pound fighter in PRIDE history. Jon Jones is trying to one-up both of those guys by becoming the greatest light heavyweight in history.

Rampage could have been part of those same discussions. The potential was there. He fell just a bit short.

Make no mistake about it. Rampage deserves to be a Hall of Famer at some point. He was the first fighter to ever unify the UFC and PRIDE belts. He did that by defeating Dan Henderson, the reigning PRIDE 205-pound champion, in his first defense of the UFC crown he earned by brutally knocking out Liddell during the height of his championship reign. Nobody will ever be able to take that record from him.

Now, after six years and 12 fights as part of the UFC, Rampage has made it perfectly clear that we have seen the last of him inside the Octagon. Maybe a change of scenery is just what the doctor ordered. The 34-year-old fighter is in the midst of the first three-fight losing streak of his career. Something is clearly off with him.

Maybe he is on the downside of his tremendous career. Maybe his life outside of fighting is taking precedence. Or maybe he is just uninspired, for whatever reason. Whatever the case, Rampage needs a shot of adrenaline in his career. For one, I certainly hope it happens.

If goodbyes are really in order, then I’d like to preface my goodbye with a heartfelt “thank you.”

Thank you for everything, Champ. You will forever be remembered as one of the great stars of the UFC and PRIDE.

Anthony Pettis expected his UFC career to start off far differently than it did. After all, he won the WEC lightweight championship in his final pre-UFC bout. He defeated reigning UFC lightweight champion Benson Henderson in one of the best fights that I witnessed that year.

Yet, Henderson went on to win the UFC crown four fights later, while Pettis was relegated back to the middle of the UFC pack due to a smothering loss to Clay Guida in his promotional debut. Since the loss to Guida, Pettis has been focused on earning a title shot that he feels should have rightfully been his when transitioning into the UFC as the WEC champion.

Three wins later, he may be on the verge of just that opportunity. Sure, Gilbert Melendez’s future title shot throws a wrench into the mix. But I think Pettis has certainly earned the right to be next in line. His win over Donald Cerrone on Saturday night established his place in the pecking order.

Say what you will about Melendez, but the fact remains that he has yet to compete in the UFC. His recent run of success, while impressive, came in another promotion, where the competition wasn’t quite the same. If we have learned anything over the last five years, it is the fact that success in smaller promotions does not necessarily translate into similar success in the UFC.

See Jake Shields for definitive proof of that statement.

Unlike Melendez, Pettis now has three consecutive wins over top lightweights. He was impressive in each of the three wins. The most recent, however, borders on career defining.

Keep in mind that, heading into UFC on FOX 6, Cerrone has never been knocked out exactly in 53 professional mixed martial arts and kickboxing matches. Pettis accomplished that feat in less than a round. By a series of body shots, no less.

The bad taste of the Guida loss, which really was a case of simply being outwrestled, is long gone. The three consecutive wins over Jeremy Stephens, Joe Lauzon and Cerrone, the last two coming in Knockout of the Night performances, leaves him atop the 155-pound heap.

We will see if he receives the title shot he so desperately wants.