Michael DiSanto takes a look back at last Saturday's UFC on FOX 4 card... 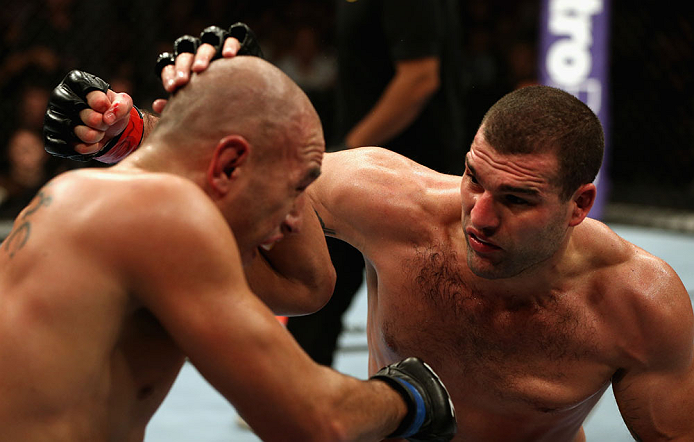 STOP ASSUMING JONES-MACHIDA IS A CERTAINTY

Lyoto Machida earned another crack at the light heavyweight crown with his amazing second-round knockout win over Ryan Bader. But it is far from certain that his title fight will come against current champion Jon Jones.

Jones is less than a month away from facing one of the most decorated fighters in the history of the sport. Sure, Dan Henderson will be 42 by fight night. Yes, that is well beyond the expiration date for most mixed martial artists. Hendo, however, is not just another fighter. He is the only man to simultaneously hold titles in two different weight classes for the UFC or PRIDE. He is also 4-0 since his 40th birthday, including wins over Fedor Emelianenko, a man once viewed as the best ever, and Mauricio “Shogun” Rua, who remains very much in the 205-pound mix.

Henderson is a very viable threat to dethrone Jones. I’m not saying that will come to fruition. I’m suggesting that it is a very real possibility.

I doubt he will ever admit it, but I’m guessing that Machida would much rather face Henderson for the title. Machida’s style is perfectly suited to topple the all-time great because he is so adept at avoiding strikes and countering unbridled attacks. Jones’ length and speed, by contrast, make it tough for Machida to execute his normal game plan, thus he has to change up his style if he wants to reverse the outcome of his December 2011 submission loss to the champion.

NO TITLE SHOT NEXT, BUT SHOGUN STILL CONTINUES TO IMPRESS

Shogun continued his streak of amazing performances on Saturday night. Throw away his loss to Jones, and it is tough to find fault with Shogun’s efforts since he lost to Forrest Griffin back in his UFC debut in 2007. His last two fights were particularly impressive because he faced and overcame very real adversity in each. Brandon Vera gave Shogun everything he wanted and more on Saturday night. And Shogun gave it all back to him, plus some more. He may not be next up for a title shot, but this guy continues to prove that he is among the very best in the world.

I would be shocked – literally shocked – if Shogun doesn’t secure a title shot with his next win. The question, of course, is who will he face next? The leading candidates seem to be Antonio Rogerio Nogueira, Phil Davis and Alexander Gustafsson, each of whom continues to push toward their first opportunity at UFC gold. Another very real possibility is a bout with the loser of next month’s title fight between Jones and Henderson. If Hendo pulls out a win and the UFC decides to give Jones an immediate rematch, then a rubber match with Machida also springs up as a possibility.

VERA PROVES THAT THE “TRUTH” MAY STILL BE IN THERE SOMEWHERE

I’m going to keep this one short and sweet. Saturday night was the best Brandon Vera that the world has seen since his win over Frank Mir. I don’t care that he lost. Vera showed tremendous grit and even better skills in his four-round effort.

The knock on this guy has never been about his skills. Vera remains one of the most naturally gifted fighters in the sport. The questions have all revolved around his commitment to training and his mental state during fights. Vera answered both of those questions against Shogun.

Vera was clearly fully prepared for battle. His physique looked tremendous, something that hasn’t always been the case. That suggests both a commitment to training and a proper diet. He pressed forward for most of the fight and held his ground when he came under heavy fire during exchanges. That suggests a level of confidence that we haven’t seen in Vera for years. The only way that confidence rears its head is if he left no stone unturned in training.

Sure, Vera has now lost three of his last five. Nevertheless, I don’t think he has ever been better prepared to maximize his vast potential in the 205-pound division. If Vera uses his loss as a motivational experience and embraces the fact that his commitment to preparation is what yielded such a great performance, then I think Vera will embark on a nice little run of wins starting with his next fight.

IS LAUZON THE BEST FINISHER IN THE GAME?

Joe Lauzon has 22 wins on his professional resume. Each of them occurred inside the distance – 18 by submission and four by knockout.

I must admit. I had no idea that was the case until UFC commentator Mike Goldberg dropped that little nugget of knowledge during the broadcast. That sort of preparation was yet another example of Goldie’s serious dedication to his craft.

I’m sure a statistician out there somewhere will do the research, but I’m guessing that there is nobody in the UFC with 20-plus wins without at least one win by judges’ decision, other than the New Englander.

But let’s not get crazy and take too much from the win. Lauzon is the real deal, but he has a lot more work to do if he wants to be considered a title contender. Nonetheless, he might just be the best finisher in the sport.

Let me know below if I’m wrong.

Mike Swick is good people. Not the “I’m a pro athlete, so I’m going to act fake in public” good. He is just a good dude. I first met him right after the filming of the inaugural season of “The Ultimate Fighter.” And he was an ordinary, humble and classy guy – he opened the door to the gym for my then-girlfriend (now wife), and he didn’t know us at the time. He didn’t do it because he felt like he had to. He did it because that is just the kind of guy he is.

With that in mind, Swick’s return to the UFC after a long, long absence with a savage knockout win after a gut-check fight was a very real feel-good story.  I’ll go one step further. It was the perfect way for him to return because it answered a lot of questions about Swick going forward.

There is no doubt that Swick had butterflies and a bit of self-doubt after his two-year absence from competition. Oh, did I mention that he was in the midst of his first career two-fight losing streak of his career, before the sport he loves so much got ripped away from him?

I’m sure the fact that he was facing DaMarques Johnson didn’t help the jitters. Johnson is a banger of the first order—an ultra-tough guy with a couple of boulders hanging from his shoulders.

Johnson had his moments of success during the fight. Swick admitted afterward that a punch in the first round left him struggling to find clear vision. But he didn’t panic. He didn’t quit. And he definitely didn’t look for an easy way out.

Swick stood his ground and fought back. He relied on his heart and skills, and they didn’t let him down. Swick’s knockout win was the finest of his career, considering all the background noise.

For my money, I think “Kid Lion” should instantly catapult back into the welterweight mix. The title picture is going to be muddied for more than a minute, so there is no need to get silly and start talking about championship implications. Nonetheless, he should definitely be in the cage against a top 10 contender in his next bout as he builds toward what I believe will be his first title fight sometime in 2013.

By the way, Mike “Quick” Swick used to be known as “Kid Lion,” for those who are new to the sport. I say we bring it back, particularly after a return to the UFC like that.