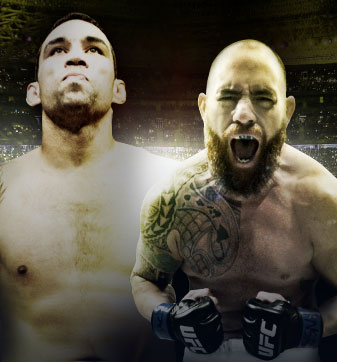 The UFC will return to FOX this Saturday night with a stacked card, including a main event between Fabricio Werdum and Travis Browne that will see the winner getting the next shot at UFC heavyweight champion Cain Velasquez later this year.

Two top 10-ranked bantamweight women will also square off when Miesha Tate takes on Liz Carmouche, and with both fighters coming off losses, this could be a win or go home situation for the one that wants to get back to another title shot.

There's also a striker's dream match on this card, as Donald “Cowboy” Cerrone faces Muay Thai wrecking machine Edson Barboza in a lightweight battle with Fight of the Night written all over it.

In today's fantasy preview we will take a look at the main card for this FOX UFC Saturday show going down in Orlando. Who has the best chance to win, and how will they get there?  Read on to find out.

The winner of this five round main event gets the next crack at the heavyweight title, so there's plenty on the line for both Werdum and Browne.  Werdum has looked fantastic since coming to the UFC, but inactivity has been his biggest enemy.  Between coaching The Ultimate Fighter Brazil and then waiting for an expected title shot, Werdum has only fought three times in just under two years.  His latest layoff has been going on for about nine months now and that's not the best preparation for a knockout machine like Travis Browne.

Browne has been on an absolute tear of late - three wins in a row, all three by first round knockout over Alistair Overeem, Gabriel Gonzaga and former UFC champion Josh Barnett.  What also bodes well for Browne in this fight is his takedown defense.  He's shucked off every single attempt against him in nine UFC fights and given Werdum's pedigree as a jiu-jitsu fighter, Browne just needs to keep that streak alive and he'll get another win and a shot at the UFC heavyweight title.

On the feet, Werdum has been quite proficient in the UFC thus far, landing 4.38 significant strikes per minute with 55.5 percent accuracy.  Combine that with his 26 takedowns in his last 21 fights, and it seems like Werdum is primed for a fight that goes anywhere.

The striking statistics for Werdum may be a bit askew giving his last few opponents, however, because facing Roy Nelson, Antonio Rodrigo Nogueira and Mike Russow, he's yet to take on anyone in the UFC that's fleet of foot or quick and nimble in exchanges.  As big as Travis Browne is (6'7", about 245 pounds), he's extremely good with his footwork and very fast for a heavyweight.  Browne also lands at just about three strikes per minute, but when he lands, he knocks people out.

Browne is hitting his stride at just the right time, fighting in December and now coming back for this fight in April.  Given his penchant for knockouts and doing so in rapid order, there's no reason to believe he couldn't pull it off again in this fight.  Werdum hasn't been knocked out since losing to former UFC champion Junior Dos Santos in 2008, but Browne might just be the man for the job to get another finish over the Brazilian fighter.  If Browne can stop Werdum's takedowns, and history tells us he can, then he will start unleashing his hellish strikes, and by the end of the first or second round, he should be holding his hand up high and staring down heavyweight champion Cain Velasquez.

Miesha Tate will look to rebound from a recent loss to Ronda Rousey when she takes on fellow Strikeforce alum Liz Carmouche in the co-main event in Orlando.

Tate has one of the strongest wrestling games in the UFC women's bantamweight division, where she attempts almost four takedowns per fight, and she has been successful at taking down every opponent she's faced between the UFC and Strikeforce.  Once she's on the ground, Tate is ultra aggressive as well, as she's attempted the fourth most submission attempts in Strikeforce history, and this is the area she needs to dominate Carmouche in to win the fight.

On the feet, Tate is not out of her element, but Carmouche lands with big power and volume.  She lands at nearly four significant strikes per minute while throwing with just over 55 percent accuracy.  Carmouche is also dangerous on the ground, where she can bludgeon an opponent with the same strength she does on the feet, and her wrestling is solid, considering she's taken down six of seven opponents between the UFC and Strikeforce.

The biggest problem Carmouche has in this fight is her takedown defense, because it's been virtually non-existent since coming to the UFC.  Now there's something to be said for the fighters she's faced (Ronda Rousey and Alexis Davis), but Tate is her third fight in a row with an opponent who wants to get to the ground and has the power and patience to get there.  Much like her battle with Davis, where Carmouche struggled to break her grip over the course of three rounds, Tate could employ a similar strategy in this one.

Tate just needs to stay tenacious, not get into any big exchanges with Carmouche, and then work for the takedown over and over again until she lands it or keeps the Marine Corps veteran locked up so she can't slip away.  Assuming Tate fights to her ability and out wrestles Carmouche for three rounds, she should walk away with a unanimous decision victory and get back on track in the women's bantamweight division.

If you are looking for the fight most likely to get an award when the night is over, this is the one to bet on.  Cerrone and Barboza are two of the best kickboxers in the division, and when these two step into the Octagon, chances are somebody's going to get knocked out.

Cerrone is a fierce striker, landing just under five significant strikes per minute with 50 percent accuracy.  When you add those together, it's understandable why Cerrone has 10 finishes in his UFC/WEC career.  He's also landed the second most leg kicks in the history of the UFC lightweight division (No. 3 is Barboza), and he's got a great chin as well, which helps in those moments when he does take a shot.

Barboza is a more classically-trained Muay Thai fighter coming out of Brazil, where he fought professionally there for several bouts.  Barboza might have the most devastating leg kicks in the UFC, maybe even more so than featherweight champion Jose Aldo, considering he's finished two separate opponents in the Octagon with that method of attack.

Where these two fighters separate just slightly, and why Cerrone maintains the advantage, is in the defense department.  While statistically Barboza has better defense than Cerrone, the tale that's unfolded during fights tells a different story.  Barboza is nasty when he unloads a barrage on an opponent, but he also often leaves himself open for a counter attack and that's where Cerrone could pounce.  Cerrone doesn't have the speed or quickness that Barboza does, but he possesses knockout power in both hands, both feet, and all it takes is one good combination and the fight could be over.

Cerrone just has to be able to weather the early storm from Barboza and then counter with his own kicks and punches.  If even one good shot slips through, Cerrone will attack like a shark on a bucket of chum and seconds later the fight will be over.  Don't discount Barboza's creativity, however, because he can uncork some dynamic strikes of his own, but on paper Cerrone maintains a small advantage and should get the KO win.

The fight to kick off the card on Saturday night will showcase two of the top up and comers in the middleweight division when Brad Tavares meets Olympic silver medalist Yoel Romero.  Tavares has been quietly climbing the ranks in the division with a five fight win streak, but if you haven't heard about him it's most likely because he puts on workmanlike performances and sticks to the basics while avoiding anything too flashy.

It's in this area where Tavares excels, landing 3.35 significant strikes per minute while peppering away with a volume of punches and kicks over the course of three rounds.  On the other side, Romero has been a finishing superstar since coming to the UFC, connecting with fight-changing power while mixing in an Olympic-caliber wrestling game.

Romero struggled in his last fight a bit when a fellow wrestler, Derek Brunson, was able to take him down repeatedly in the first and second rounds of their matchup.  Fortunately for Romero, he was able to survive those attacks and come back with a vicious knockout in the third round.  This time around, Romero won't have to worry as much about Tavares' takedowns, and he can stay comfortable on his feet while mixing in some wrestling of his own if needed.

Look for Romero to pressure Tavares in a way his last few opponents have failed to do, and if these two start throwing in an exchange, the Cuba-born wrestler will eventually connect with the one punch he needs to end the fight.  Still, Tavares has proven to be leather tough during his win streak, so he might be the person to finally pull Romero to a decision, but the judges should still hand the win to the former Olympian, giving him his fourth victory in a row.