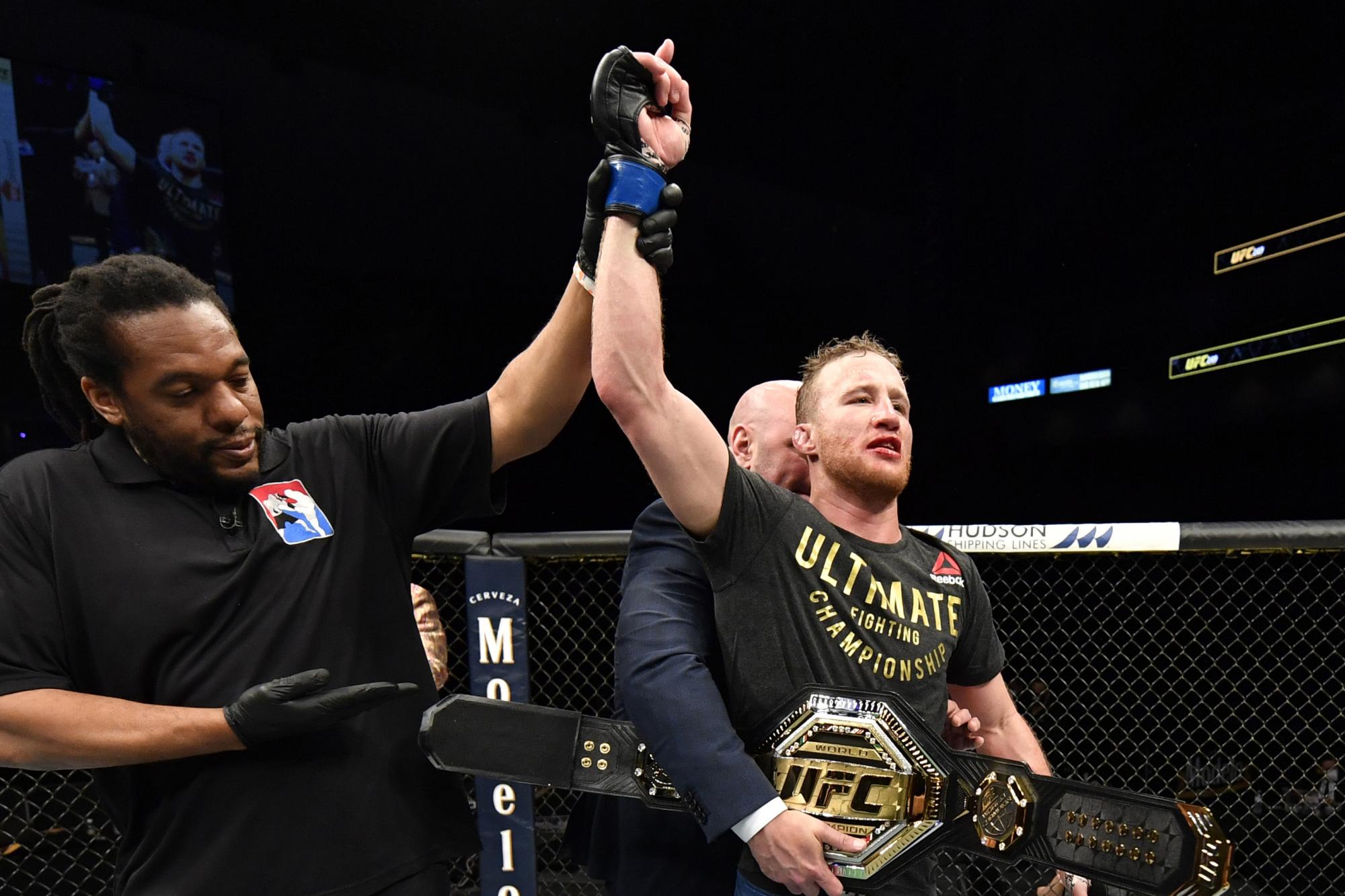 Recap the bonus winners from all three events from Florida
By Zac Pacleb, on Twitter: @ZacPacleb • May. 18, 2020
UFC 249
Fight of the Night

When you get two fighters appropriately nicknamed “El Cucuy” and “The Highlight,” beautiful carnage is expected, and that’s exactly what Tony Ferguson and Justin Gaethje delivered in their interim lightweight title bout.

While Gaethje earned a TKO win in the fifth round, the bout showed both men doing what they do best. Ferguson’s unorthodox movement and diverse attack allowed him to get on the front foot early, but once Gaethje figured out the timing and distance, it seemed like he couldn’t miss with his left hook. Over and over again, Gaethje cracked Ferguson with quick combos and punishing leg kicks, and over and over again, The Boogeyman kept on coming forward. Gaethje obliged him and kept dealing more punishment than we’ve seen Ferguson ever take as he went on his 12-fight winning streak.

It wasn’t all Gaethje, though. Ferguson’s best moment came at the end of the second round, landing a flush uppercut as the horn sounded. Somehow, though, Gaethje recovered and continued to put together a beautiful performance en route to earning the interim title. Ferguson’s winning streak came to an end, but it was nothing to hang his head about either.

Justin Gaethje put together a masterpiece against Tony Ferguson, a man few have been able to hit, let alone stun multiple times over the course of five rounds. Gaethje’s hands were so stunningly accurate that it seemed like he’d replaced hands with homing missiles. Sweeping left hooks and heavy straight rights connected time and time again as he countered Ferguson’s forward pressure and moved toward the former interim champ.

The performance seemed like the culmination of the “new” Gaethje, the one that understood how to avoid punishment while also still delivering those highlight reel moments. Before the fifth round began, Gaethje sat on the stool clearly loving the moment, but with help from coach Trevor Wittman, he remembered the two times he got too comfortable and was stopped against Eddie Alvarez and Dustin Poirier. With those failures in mind, Gaethje went right back to dishing damage and avoiding Ferguson’s full arsenal of attacks.

Now, he earned his long-awaited shot at Khabib Nurmagomedov and UFC gold.

There shouldn’t be any doubt about who the most terrifying puncher is on the roster. It’s Francis Ngannou, who only needed 20 seconds to take out Jairzinho Rozenstruik. To Rozenstruik’s credit, he called for the fight, but as Ngannou said afterward, Ngannou knew Rozenstruik didn’t know what he was getting himself into with the callout.

It was Ngannou’s eighth first-round stoppage inside the Octagon and fourth straight win. On his current winning streak, Ngannou spent less than three total minutes in the cage while putting away Curtis Blaydes, Cain Velasquez, Junior Dos Santos and Rozenstruik. The only thing in the way of his second shot at the title is the DC-Stipe trilogy fight, but when his time comes, it’s hard to imagine he won’t have gold wrapped around his waist soon.

UFC Jacksonville
Fight of the Night

In a fun, back-and-forth bout between bantamweights fighting at 145 pounds, Brian Kelleher battled through some adversity to hand Hunter Azure his first professional loss by way of a second-round stoppage.

Azure seemed the cleaner, faster and more successful fighter on the feet early, more or less controlling the first round. Kelleher started the second round with an overhand right that reminded Azure he was well into the fight, and the momentum slowly shifted for “Boom.” That momentum manifested itself into a clean left hook that dropped Azure, and after adding a couple of hammerfists to the mix, Kelleher got the win.

At 40 years old, Glover Teixeira showed everyone it is possible to not only reinvent yourself as a fighter, but to do so in a way that can put one back at the top of the division as he stopped Anthony Smith in the midweek main event.

Although Smith was the busier and more successful fighter early, Teixeira weathered the flurries for the first couple of rounds while chipping away at some leg kicks as Smith tired. After Teixeira caught a powerful right hand that swelled the Brazilian’s left eye, Teixeira stunned Smith with a head kick that appeared to swing the pendulum to his favor. Teixeira engulfed the momentum when he rocked Smith with a stunning right uppercut that put Smith into survival mode for the rest of the fight. Teixeira mixed things up, fishing for submissions while dealing vicious ground-and-pound for the next few rounds as Smith showed his immense heart. Eventually, though, Teixeira was too much, earning a fifth-round stoppage and showing the rest of the light heavyweight division he still has plenty of high-level fighting left in his tank.

Slowly but surely, Drew Dober has marched toward the lightweight rankings after a rocky start to his UFC career. After starting his time in the Octagon with just one win in five fights, the Nebraskan has won six of his last seven and earned his third-straight finish by taking down Alexander Hernandez in the second round.

The two lightweights got right to it, throwing heavy shots until Hernandez took Dober to the mat. Dober was able to get up and continue the striking match, gradually getting a better sense of Hernandez’ timing and frequent movement. In the second round, Dober landed a left hand that prompted a Hernandez takedown. Once Dober got up, he stunned the Texan again, and once more forced a takedown. Dober got back to his feet and back to work, though, and eventually earned a second-round TKO and likely a spot in the vaunted lightweight rankings.

Up-and-coming bantamweights threw down at 145 pounds for three rounds in an exciting, back-and-forth contest.

Song Yadong and Marlon Vera went strike for strike in a razor-thin first round, and somehow, they turned up the pace and heat in the next frame. Vera kept a constant pressure while Song landed the more impactful shots, including a heavy body shot late in the round. The third round saw Vera land a pair of takedowns, but when Song got up from both, he continued to land his powerful shots to end the bout.

As the scorecards were read, it seemed like Song had resigned to the fact that Vera got the best of him, but in the end, the Chinese-born Team Alpha Male product got the impressive win.

Phoenix-native Cortney Casey earned her first finish since 2016 as she submitted Mara Romero Borella in the first round by armbar.

Borella got Casey to the ground early, but Casey – making her UFC flyweight debut – remained patient, working for an armbar from her back. Slowly but surely, Casey got her angles right, and once she locked it up, Borella tapped out almost immediately.

The win is Casey’s first since 2018, and whether or not the move to flyweight is permanent, she reminded everyone that she is one of those fighters who is much better than her record would indicate after fighting the who’s who at 115 pounds.

In a wild fight, Miguel Baeza earned an impressive win over an always-game veteran in Matt Brown by way of a second-round knockout.

Baeza chopped at Brown’s calf early and put the pressure on Brown, but “The Immortal” showed he still has plenty of vicious power, staggering Baeza and landing a few of his patented elbows. Baeza recovered, though, landing a right hand that swung the momentum all the way to his favor as Brown fell to the canvas. After the back-and-forth first round, Baeza was more assertive in the second and opened with a good combination that Brown ate well. Soon enough though, Baeza hit Brown with a clean left hook that ended the fight and kept Baeza’s undefeated record intact.