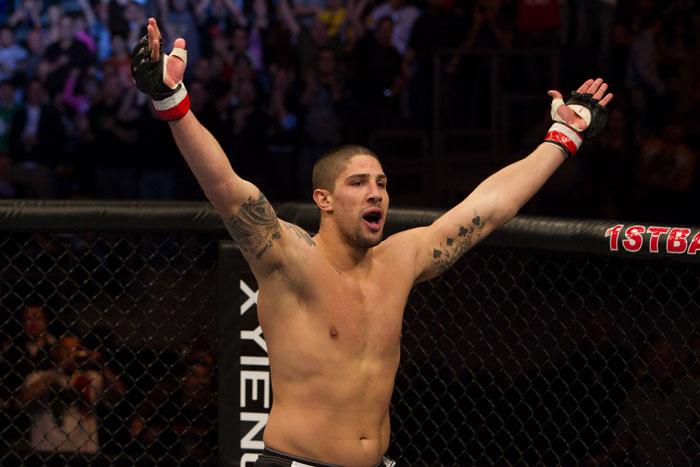 Heavyweight Brendan “The Hybrid” Schaub (9-3-0) is looking to get back in the win column when he steps into the Octagon against bruiser Lavar “Big” Johnson (17-6-0) on February 23 at UFC 157. The two were slated to square off back in December but had their fight rescheduled after Johnson was forced to bow out due to an injury. Since then, Schaub has continued to train and prep for their matchup.

“I’ve been in training camp about 18 weeks now,” he told UFC.com. “But for me, it’s a lifestyle. As soon as I’m done with fighting, I’m not sure what else do to — I eat healthy all the time, and I train twice a day. That’s just my life.”

The Basics
For Schaub, a healthy diet includes no booze or fast food. “I haven’t eaten fast food in probably eight years,” he revealed. “Guys who [eat clean and train hard] six weeks before a fight, that’s not disciplined enough.”

On the training end, Schaub stresses the nuts and bolts above all else.

“The best fighters in the world focus on fundamentals,” he said. “To win [in the UFC], you should live in the gym and concentrate on the basics; that’s what I’ve done, and I think it’s starting to pay off.”

In the past, as a professional football player for the Arena Football League and as a member of the Buffalo Bills practice squad, his “nothing fancy” approach to training included a lot of Olympic lifts and explosive movements.

The Basics - Times Two
To get a sense of how Schaub trains when he’s gearing up for a fight, we asked his longtime trainer Loren Landow, the director of sports performance at the Steadman Hawkins Clinic in Denver, Colorado to supply us with a sample workout.

“With Brendan, I typically pair [up] exercises on strength days,” Landow explained. “The first being a strength exercise and the second is either a speed, stability, or active range of motion exercise — depending on the day and where we are in his camp.”

After an active dynamic warm-up (here's one to try), Landow gets Schaub working on his footwork with drills in the agility ladder. “I pick five drills that reinforce coordination and [also] excite the central nervous system (CNS),” he said. “We will usually do 3-4 reps of each drill, and Brendan will have a 1:1 work-to-rest ratio before we begin the next drill.” (A 1:1 work-to-rest ratio means however long it takes Schaub to do the exercises, that’s how much rest he gets.)

Landow says: “We do this pairing to increase CNS firing rate. Schaub gets a 1:1 Rest on this portion of the workout.”

Landow says: “We want to maximize Brendan’s strength on the bench press, so he gets a full 2.5 minutes of rest to recover.”

Exercise pair #3: Wide-grip pull-up and overhead squat
Landow has Schaub use a lightweight PVC tubing for the overhead squat, and allows for two to three minutes of rest between each set.

Landow says: “We’re looking for active recovery to facilitate and influence mobility through the joint range of motion.”

Exercise pair #4: Cable column rotations (trunk rotation) and SandBell (rubber sandbag) speed rotations
Schaub is in an athletic stance with his feet wide and has the physio ball between the cable and his sternum at about belly-button height. One cable column rotation rep consists of keeping the head still and rotating the shoulders cheek to cheek, and back to the starting position.

Landow says: “Like using a donut on a baseball bat, I’m using the heavy resistance exercise to potentiate the speed of the SandBell rotation. Increasing rotary strength helps with the transfer of power of kicks, punches, clinch, takedown, and takedown defense. He rests two minutes after each pairing.”

Exercise pair #5: Prowler (weight sled) and TRX isometric hold
The isometric contractions of the TRX iso holds will help improve muscular endurance and create a stronger clinch. Fat grips are added to mimic wrist circumference and to create a better burn on the forearms.

Landow says: “I want resistance on the sled, but I still want it to have the speed of a sprint; too heavy of a sled makes for too slow of a movement. With the TRX horizontal pull-up, I want to force Brendan to hold position isometrically [similar to] a submission attempt. It also helps him learn to calm his breathing down while maximally squeezing. [With these] we use a 1:2 work ratio.”