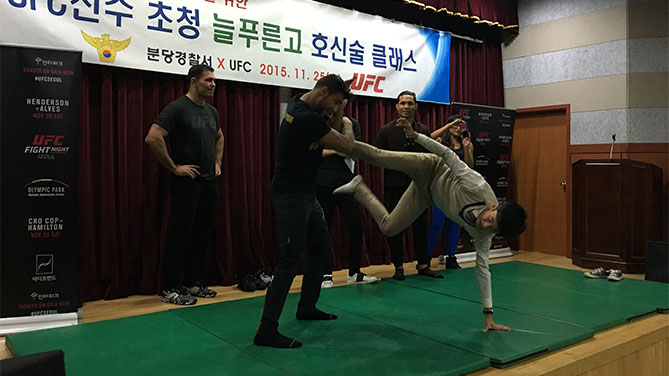 In this setting, “Big Nog” was living up to his nickname. With more than 100 starstruck high school students looking on and screeching in delight, Antonio Rodrigo Nogueira placed his size XL hands on the shoulders of a South Korean student half his size.

With a few swift moves just taught to him by the Brazilian Jiu-Jitsu master, the student grabbed the man beloved in Brazil as Minotauro, and swung him firmly to the floor.

“And that is how you defend yourself!” Nogueira proclaimed, breaking out in a wide smile and high-fiving the beaming young man.

For a group of lucky students from Nulpureun High School in Bundang-go, Gyonggi Province about 40 minutes from Seoul, the ultimate in-class presentation this week was a hands-on self-defense class taught by UFC stars Yair Rodriguez, Julianna Pena, Jon Tuck and Nogueira.

With police officers from the Bundang Police Station acting as hosts, Officer Kwon Hyuk Soo took the mic and encouraged volunteers to come onstage to learn self-defense moves directly from the guest fighters.

Rodriguez demonstrated how to dodge punches in MMA, and paired with Tuck onstage to show students how to escape a rear naked choke. Nogueira showed the assembly how to effectively counter and block an opponent, while Pena demonstrated to a male and female volunteer how to defend a rushing opponent with kicks.

Amid chants of “Big Nog!” Nogueira closed with a speech about how being skilled in self-defense can help overcome hardships and build confidence.

The exchanges brought huge applause and laughter, as well as emotional responses from fighters themselves.

“This is just amazing! They’re the most amazing fans!” said Pena, who was swarmed by admiring students begging for hugs, selfies and fist bumps. “It’s humbling and such an honor, really, to be here.”

Said Rodriguez, “Do they really know who I am here? I can’t believe it!”