Footballs were flying in every direction on the Redblacks’ practice field Wednesday afternoon at The Stadium at TD Place as the team continues its preparation for the start of the Canadian Football League season.

The best toss of the day may have come from UFC staple Donald “Cowboy” Cerrone, who showed up after practice to get some football tips from players and give some MMA instruction to all interested parties.

Cerrone takes on Canadian Patrick Cote in the co-main event of Fight Night Ottawa Saturday night on FS1. But he took some time to chat and hang out with members of Ottawa’s CFL squad.

“It’s cool to see other pro athletes,” Cerrone said. “You connect on certain levels and it’s fun, man. They’re going through [practice] in full pads and everything. Looks like they’re going through the motions and do the same thing leading up to a game just like we do -- get ready and prepare for when it’s game day.”

While Cerrone showed off his football skills, Misha Cirkunov shined as an MMA instructor. The light heavyweight, who has posted two wins by finish since joining the UFC ranks, took Redblacks quarterback Trevor Harris aside for some one-on-one training. 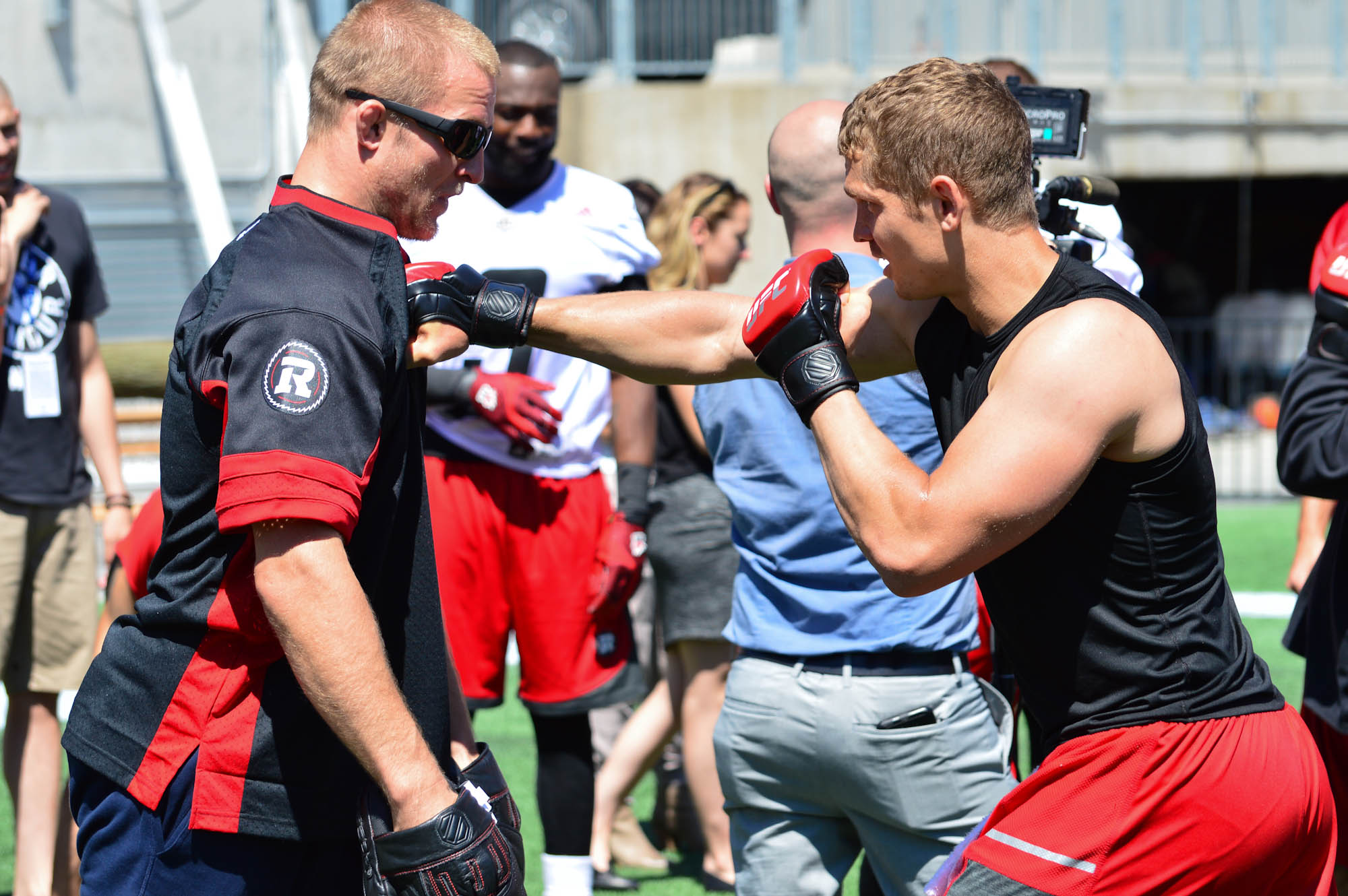 Cirkunov, who faces 11-1 newcomer Ion Cutelaba on the FS1 prelims, had Harris snapping off crisp jabs and executing some slick footwork by the end of their time together. The Latvian product – who lives and trains in Toronto, Canada – was thrilled to represent the UFC and meet other fellow athletes.

“I’ve been doing martial arts my entire life and when I was a kid, I watched UFC fights and never thought I’d reach this level,” Cirkunov said. “To see other athletes enjoy our presence, and they know how hard we work and we know how hard they work. Everyone coming together and enjoying each other’s presence – it’s just a great day.”

Redblacks standout defensive lineman Connor Williams sparred with Cerrone and Cirkunov, and the former Utah State Aggie said it was a blast.

“I’ve watched these guys on TV and I’m a big fan of their fighting styles,” he said. “They’re true warriors and just to have them out here kicking it with us – and be humble enough to be out here and show us a few things – it was a cool experience.” 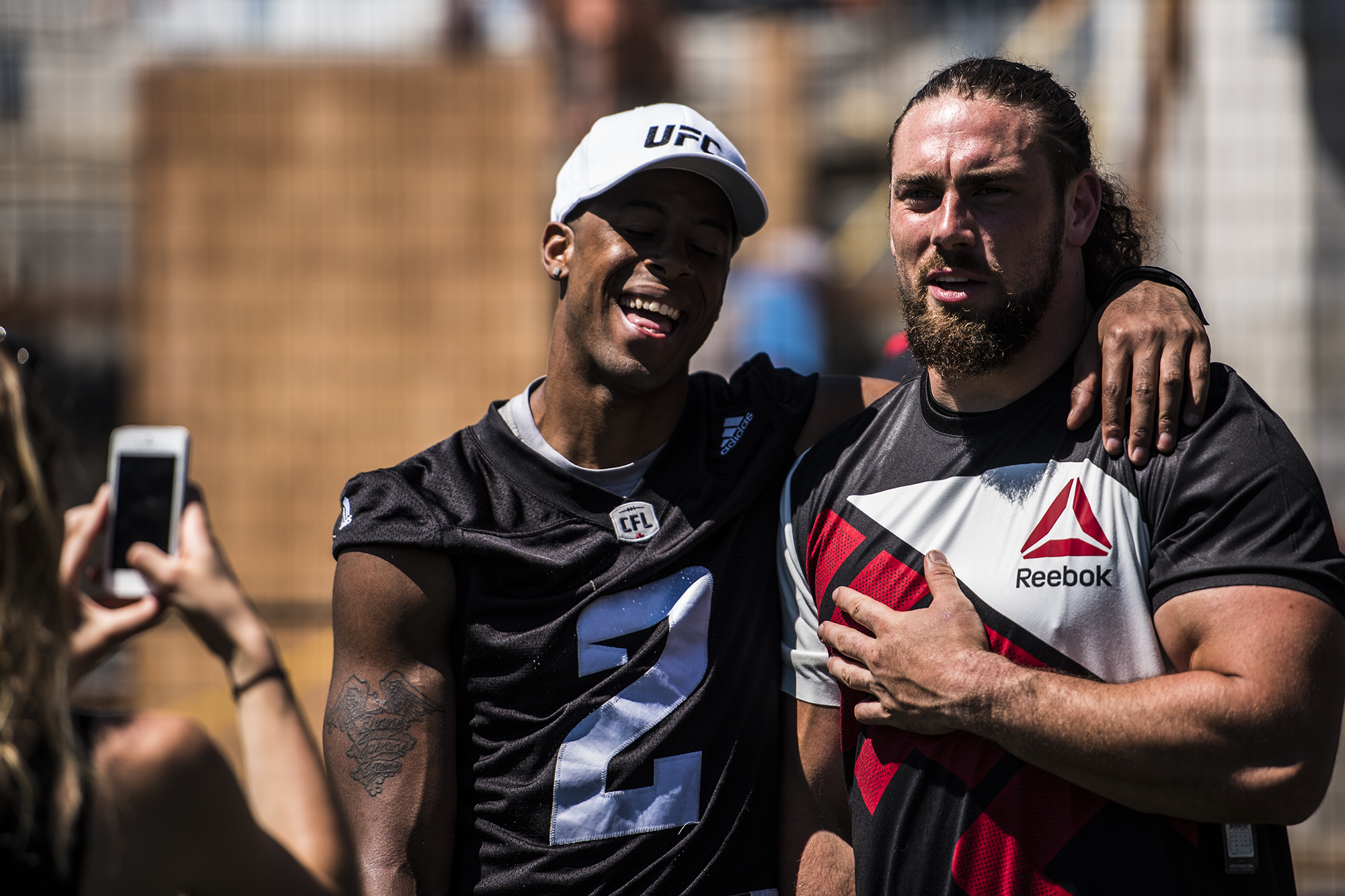 The UFC has taken over the city of Ottawa this week as the nation’s most popular fighter, Rory MacDonald, is set to headline on home soil against dangerous contender Stephen “Wonderboy” Thompson.

UFC Executive Vice President and General Manager of Canada, Australia and New Zealand Tom Wright, who is a former CFL commissioner (2002-2007), said that the football/MMA meet and greet was an amazing kickoff event to an exciting fight week in Ottawa.

The nation’s capital has embraced the UFC. The event has already made history as the fastest sellout ever at TD Place.

The Redblacks finished as runners-up in last season’s Grey Cup, which celebrated its 103rd annual championship game. The city of Ottawa is psyched about its football team this season and there are plenty of reasons to be excited.

“The Ottawa Redblacks are the third iteration of Canadian football in Ottawa,” Wright said. “They were the Rough Riders, then the Renegades and this current edition of this Ottawa CFL franchise is by far the strongest they’ve ever had. They have great ownership, an amazing stadium to play in and the current Most Outstanding Player in quarterback Henry Burris. The entire Ottawa region has really engaged and embraced the team.”