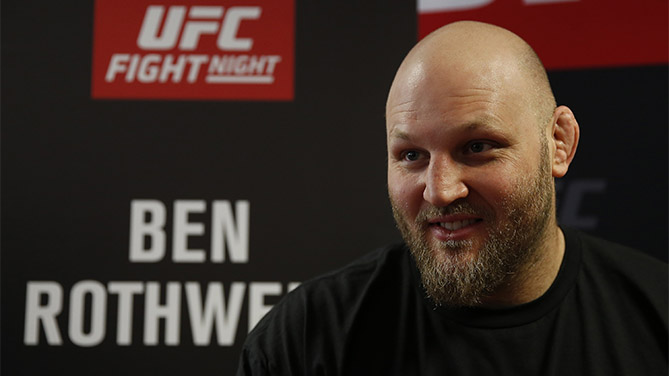 This Sunday, he Octagon will add a new stamp to its ever-expanding passport by touching down in Zagreb, Croatia for UFC Fight Night: Rothwell vs. Dos Santos.

In a main event packed with title shot implications, former UFC heavyweight champion Junior Dos Santos will clash with the fastest-rising star in the division, “Big” Ben Rothwell. The latter is enjoying a four-fight win streak that is comprised of two knockouts, two submissions and two Performance of the Night bonuses. Meanwhile, Brazilian bomber Dos Santos is coming off his first loss inside the Octagon to a fighter not named Cain Velasquez, but, before that, “Cigano" did deliver a Fight of the Night unanimous decision win against current #1 contender Stipe Miocic.

Obviously a win for either Rothwell or Dos Santos would be enormous and critical to get them that much closer to a battle for the UFC heavyweight belt, which is being contested between current champ Fabricio Werdum and Miocic in the headlining bout at UFC 198 in Curitiba, Brazil.

As for the UFC event in Zagreb, the main card, featuring six bouts begins at 2:00 PM EST on FS1. The prelims will be broken up between four fights on FOX SPORTS 1 starting at noon EST and an exclusive three fights on UFC FIGHT PASS starting at 10:30 AM EST.

It’s a featherweight fracas as Scotland’s Robert Whiteford tangles with Brazil’s Lucas Martins in the main event of the UFC FIGHT PASS prelims. Both fighters have experienced the thrill of success and the bitter taste of defeat inside the Octagon, and both will be aiming to go above .500 as UFC prospects.

The American Top Team trained Whiteford is known as “The Hammer” for obvious reasons as he owns half of his 12 career wins by KO, including his first-round knockout of Paul Redmond last July. Not to be outdone, Martins is fastball-pitching puncher who has scored 10 KOs across his 15 career wins, including his knockout of Alex White at UFC Fight Night: Cerrone vs. Miller, which netted “Mineiro” a Performance of the Night bonus.

Both fighters have their backs against the wall coming off recent UFC losses, specifically against grinder extraordinaire Darren Elkins. Expect a fast and finish-friendly pace by Whiteford and Martins as they try to regain a foothold in the featherweight ranks.

At UFC 182, the then-undefeated Cannonier made his Octagon entrance in an ultra-tough matchup against UFC and Strikeforce veteran “Savage” Shawn Jordan. It was a quick night for Tha Killa Gorilla, as his career’s seven-fight win streak was snapped by a first-round KO loss. Obviously, Cannonier wants to make a much better second impression by showing off his own finishing skills that gave him six of his seven career wins.

Taking him on will be France’s Asker, who has an identical 7-1 pro record. The Silverback will be riding a five-fight win streak into his UFC debut, which consists of four finishes with one of those being a TKO of UFC veteran Ruan Potts this past June in South African MMA promotion EFC.

And kicking off the UFC FIGHT PASS prelims, undefeated Alessio Di Chirico will make his UFC debut against fellow Octagon first-timer Bojan “Serbian Steel” Velickovic in a welterweight tilt. Italy’s Di Chirico has a stellar 9-0 pro record, with the even more eye-popping eight finishes being an even split of submissions to striking stoppages.

Across the Octagon, Serbia’s Velickovic has been stacking up wins, turning heads and claiming a gold belt in the California-based promotion RFA. With an overall 13-3 pro record, Serbian Steel has earned four straight wins in the RFA and, most recently, won their vacant welterweight belt via guillotine choke in January.

Not a UFC FIGHT PASS member? What are you waiting for? Start your 7-day free trial now!

UFC FIGHT PASS members, dive deep into the FIGHT PASS vault to bring you five of the hidden gems in the vast, 12,000-plus fight deep library.

Ben Rothwell vs. Alistair Overeem at UFC Fight Night: Jacare vs. Mousasi, September 5, 2014
WATCH FIGHT
This UFC heavyweight bout would be even more prominent today than it was even then, as top-ranked heavy-hitters Alistair Overeem and Ben Rothwell squared off with a quick and climatic ending.

Dan Henderson vs. Mauricio Rua at UFC Fight Night: Shogun vs. Henderson 2, March 23, 2014
WATCH FIGHT
Two plus years earlier, Dan Henderson and “Shogun” Rua set the Octagon ablaze in one of the most riveting main events at UFC 139. Nothing changed in the rematch as these two veteran knockout artists traded their best blows in an explosive headlining bout.