Before the action hits the cage in Salt Lake City, Utah on Saturday night, Titan Fighting Championship lands on UFC FIGHT PASS this Friday with another quality card featuring a number of familiar names and capped by two championship bouts.

Taking place at the BankUnited Center on the University of Miami campus in Coral Gables, Florida, Titan FC 40 promises to be another electric night of fights and a potential launching pad for some talented fighters seeking an opportunity to compete in the Octagon.

Here’s a look at some of the key matchups and fighters to watch on Friday night.

After claiming the title with a first-round knockout win over Pat Healy at Titan FC 39, Cavalcante looks to successfully defend the strap in a tough main event matchup opposite the underrated and surging Assuncao.

Now 33, Cavalcante has fought a who’s who in the lighter weight classes over his 12-year career and is eager to cement himself as the top man in Titan’s 155-pound ranks. His victory over Healy was his first appearance in nearly two years and “JZ” looked rejuvenated – like the dangerous finisher that became a star under the K-1 Hero’s banner years ago.

Aiming to halt his reign before it really starts is Assuncao, who has put together an eight-fight winning streak while fighting in a staccato rhythm over the last six years. If he’s able to make it nine-in-a-row, the potential is there for the 34-year-old to join his brothers Raphael and Junior in having competed on the UFC stage.

This should be a crackerjack of a championship clash, as both men are well-rounded, seasoned veterans that are acutely aware of what’s at stake and what a win on Friday night in Florida could mean for the next stage of their careers.

These two will throw down in an interim title fight to position themselves at the top of the weight class while reigning champ Tim Elliott is away taking part in the upcoming all-flyweight season of The Ultimate Fighter.

Velasquez made a successful Titan FC debut in June, picking up a majority decision win over veteran Alexis Villa. A winner of six of his last seven, the 23-year-old has shown an ability to finish on the feet or on the canvas and looks to stifle the ascent of one of the company’s brightest young stars here.

After putting together an 8-0 record as an amateur, Torres has continued his winning ways since turning pro, picking up wins in March and April under the Titan FC banner to put himself in a position to face Velasquez for the interim title.

With there being no assurances that Elliott will return to the Titan FC roster after his TUF appearance, Velasquez and Torres could very well be fighting for the long-term seat at the 125-pound weight class. 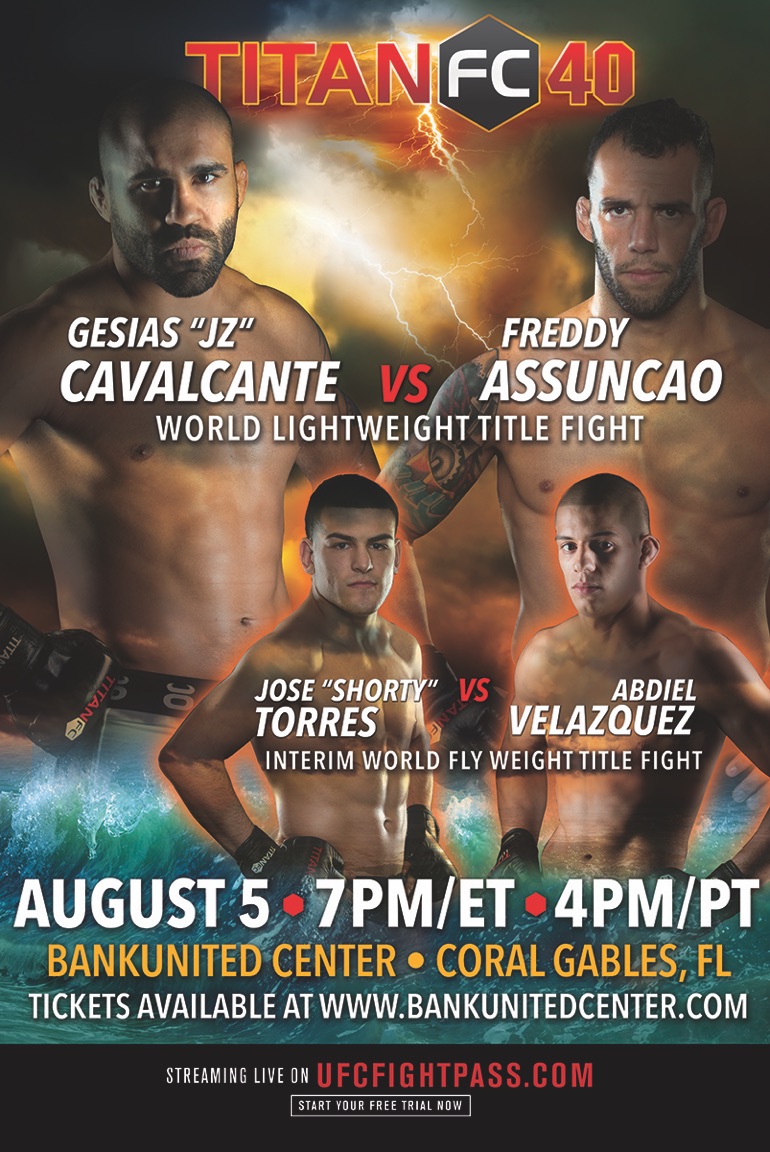 The unbeaten Freeman gets the opportunity to step into the cage with a former Titan FC champion in this one, as Green moves up to the lightweight division in his first bout with the organization since losing the featherweight title to reigning champ Andre Harrison back in September.

Green has picked up a pair of victories beyond the Titan FC cage since that loss to Harrison, but standing in his path is the unbeaten Freeman, who has racked up five consecutive first-round stoppage wins to begin his career and earn this look at the next level against “The Predator.”

This is a tremendously important matchup in the bantamweight division and the winner could very well end up fighting for the currently vacant title before the end of the year.

In his Titan FC debut, dos Santos turned a short-notice, main event assignment against prospect Ricky Simon into a second-round submission victory, instantly establishing himself as one of the top dogs in the 135-pound weight division. Now with a full camp behind him and the championship belt still in limbo, all that seemingly stands between “Berinja” and a shot at Titan FC gold is Whitney.

Of course, the 32-year-old Titan regular has no intention of simply being a stepping stone to bigger and better for the Brazilian. Riding a three-fight winning streak – the last two inside the Titan cage – Whitney appears to have put some of his prior struggles with inconsistency behind him to return to being a force at this level.

Others to Watch at Titan FC 40

Sabah Homasi: a member of Team Blackzilians on Season 21 of The Ultimate Fighter, the 27-year-old welterweight looks to make it two in a row in the Titan FC cage with a victory over Preston Parsons after collecting a first-round TKO win over Vitor Regis Eustaquio in June.

Ron Stallings: “The Choir Boy” went 1-2 in a three-fight stint in the UFC marred by short notice matchups that ended with a DQ loss against Joe Riggs. Returning to the regional circuit, the 33-year-old Team Lloyd Irvin member looks to get back in the win column in impressive fashion and perhaps earn a second chance to step into the Octagon in the future.

Jorge Calvo: is an unbeaten prospect from Costa Rica making his Titan FC debut, taking on veteran Alexis Vila. While “The Exorcist” has struggled of late, the former Olympic wrestler still has enough experience and pedigree to be a solid litmus test for the undefeated, but largely unchallenged Calvo here.