An outstanding month of action on UFC FIGHT PASS closes out with the return of Titan Fighting Championship, as the organization delivers a welterweight title fight, a handful of promising up and comers and some familiar names to the cage for Titan FC 38 from the Miccosukee Casino in Miami, Florida.

Here’s a look at the action that is set to go down Saturday night.

Steve Carl (22-4) vs. Belal Muhammad (8-0) for the Titan FC Welterweight Title
The main event features the kind of matchup that works so well on the regional circuit, as the veteran Carl steps in with the unbeaten upstart Muhammad in a clash for welterweight superiority.

American Top Team’s Carl was part of Season 21 of The Ultimate Fighter and has logged bouts in numerous organizations, building a 22-4 record with 17 submission finishes over his 10-year career. Conversely, Muhammad is more of a homegrown product – a Midwest staple coming off back-to-back decision wins under the Titan FC banner looking to pick up the biggest victory of his career and cement himself as one of the top prospects in the 170-pound ranks. 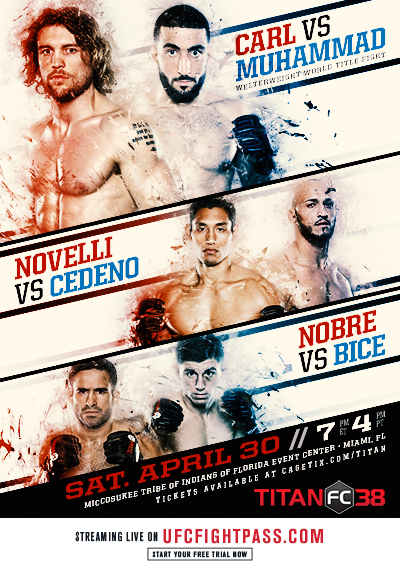 Jason Novelli (11-1) vs. Yosdenis Cedeno (10-5)
Another welterweight matchup occupies the co-main event slot for this weekend’s fight card as Cedeno makes his first appearance since a four-fight stint in the UFC against Novelli, a Pacific Northwest product on a four-fight winning streak.

Cedeno competed at lightweight during his time in the Octagon, picking up a win over Jerrod Sanders while dropping decisions to Ernest Chavez, Chad Laprise and Cody Pfister. The cut to ’55 was tough for the Cuban veteran, so the move back to the 170-pound ranks should have him stepping into the cage poised to perform at his best. Fighting out of Vancouver, Washington, Novelli is 2-0 with Titan FC, earning wins over Zak Bucia and E.J. Brooks, and he has the wrestling and submission game to give Cedeno fits.

With the title on the line in the main event, these two will be working hard to make a big impression on the brass in order to improve their positioning in the divisional hierarchy.

Pedro Nobre (17-2-2) vs. Side Bice (5-0)
Much like the main event, this is one of those “veteran vs. prospect” battles that are so compelling at this level and comes with the added caveat that a victory for Bice will earn the undefeated upstart a shot at Titan FC flyweight champ Tim Elliott.

Nobre went the distance with the champ last time out, coming up short on the cards, but acquitting himself well nonetheless. The setback brought his six-fight unbeaten streak to a close, but established the Brazilian as an established veteran at the top of the weight class that prospects will need to get through in order to earn their shot.

A Factory X Muay Thai product, Bice has earned decisions in each of his last three fights, including a victory over Shaine Jaime at Titan FC 35 last time out. With just five pro fights under his belt, the self-described “small town kid from South Dakota” can take a big step forward with a victory over Nobre on Saturday night.

Jack May (7-2) vs. Chase Sherman (7-1)
Returning after nine months on the sidelines, the 35-year-old Combat Submission Wrestling product May squares off with the 26-year-old knockout artist Sherman in a heavyweight matchup that is bound to be exciting.

May sported a perfect record when signed by the UFC in the winter of 2014, but consecutive losses to Derrick Lewis and Shawn Jordan have left him looking to rebound as he makes his debut with Titan FC. Sherman has rebounded from the lone setback of his career – a December 2014 loss to current UFC light heavyweight Alex Nicholson – with a trio of stoppage wins, including a 63-second victory last month.

Emerging heavyweight prospects are hard to find these days and Sherman has the opportunity to prove he’s the real deal here with a victory over May, an established veteran from a good camp who has a pair of appearances in the Octagon. If he can push his winning streak to four, the Mississippi native could earn himself a call from Joe Silva in the future.

Bruce Lutchmedial (4-1) vs. Pablo Alfonso (9-6)
Floridians collide in this catchweight affair contested at 140 pounds, as Lutchmedial looks to extend his winning streak, while Alfonso aims to restart his career with a victory.

After dropping his pro debut to Anthony Christodoulou almost five years ago, Lutchmedial has amassed four straight victories spaced out over nearly four years, including a decision win over Douglas Frey. Meanwhile, Alfonso has shared the cage with some familiar names, including Miguel Torres and Pedro Munhoz, but hasn’t fought since a July 2014 loss to former TUF cast member Cody Bollinger.

Will the 24-year-old Lutchmedial continue his run of success and begin a stretch of regular appearances or will the veteran halt his progress and get himself back into the win column?

Peter Petties (3-0) vs. Caio Rocha (4-0)
Undefeated featherweights meet in this one as Team Lloyd Irvin product Petties faces off with the 22-year-old Rocha.

Petties picked up a highlight reel win against Jacob Tampos at Titan FC 35 in September, connecting on a spinning backfist midway through the first round that brought the contest to a sudden stop. After a “no contest” result two months later, “The Joker” is eager to get back into the win column.

As for Rocha, the Brazilian has collected consecutive first-round stoppage wins after beginning his career with a pair of decisions. Big for the division and with plenty of room to grow, Rocha is one of those young fighters that could show massive improvements between each appearance and after seven months on the sidelines, it will be interesting to see how much he’s progressed in this one.

Reynaldo Reyzinho (8-8) vs. Jose Torres (1-0)
After collecting a first-round submission win in his professional debut at Titan FC 37 in March, Torres returns and takes a step up in competition, jumping into the cage with the 35-year-old Brazilian “Reyzinho.”

One of the most intriguing prospects in the sport, “Shorty” won both the 2014 and 2015 IMMAF World Amateur Championships and with a couple more impressive outings, the 23-year-old could find himself on the UFC’s radar, if he’s not there already.

Cory Tait (8-3) vs. Andrew Whitney (12-4)
The night kicks off with a bantamweight battle between Londoner Tait and the American veteran Whitney.

This fight marks Tait’s return after 19 months on the sidelines and he’s got a tough test in front of him, as Whitney enters on a two-fight winning streak and has been in the cage with the likes of Cody Gibson and Ben “10” Nguyen in the past. Both men are finishers, so this one should kick off the card with a bang.