No one can truly predict what will happen when the Octagon door closes, but on paper, the UFC FIGHT PASS portion of this week’s Fight Night Portland card has the potential to be the best yet. In four intriguing bouts, light heavyweight and heavyweight finishers collide, two bantamweight up and comers meet, and in the UFC FIGHT PASS Featured Bout, middleweight standouts Tamdan McCrory and Nate Marquardt square off at the 185-pound crossroads.

It all begins at 7:15pm ET / 4:15pm PT, and without further ado, this is the UFC FIGHT PASS preview of Fight Night Portland…

Tamdan McCrory VS Nate Marquardt
Tamdan McCrory has spent his entire career training at home in upstate New York, but after a loss to Krzysztof Jotko in June, the “Barn Cat” went out west to Las Vegas to prepare for Nate Marquardt. New looks are never a bad thing, and at 29, McCrory is young enough to adapt to the new environment with no problem, but make no mistake, this is a big fight for him if he wants to take his career to the next level. Marquardt is that guy a prospect has to get by, and while “Nate the Great” doesn’t want to be seen as a gatekeeper, at 37 and with a 1-3 record in his last four, the Colorado native also needs a win to avoid that status moving forward.

Ion Cutelaba VS Jonathan Wilson
Yes, Ion Cutelaba wasn’t fighting UFC-caliber opposition before arriving in the UFC earlier this year, but how do you not love a guy who has nine finishes in 1:13 or less? The same goes for Jonathan Wilson, who has six knockouts in seven wins, four in less than two minutes. The light heavyweight division can always use some young guns, and the winner of this one could very well be that guy. Just don’t leave your seat when this one starts. 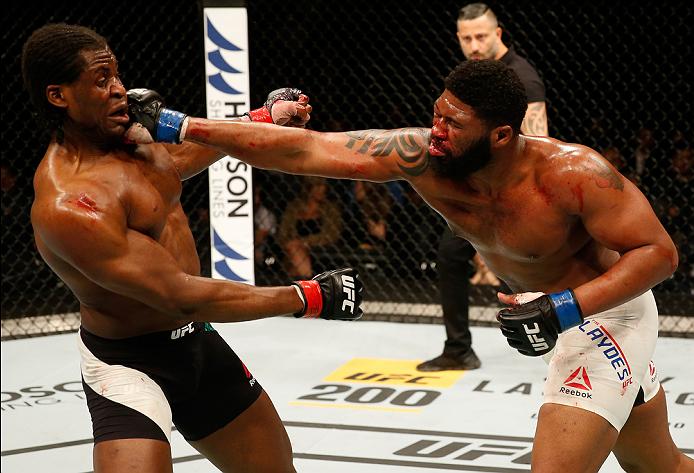 Just like Cutelaba vs Wilson, this fight between heavyweight prospects Curtis Blaydes and Cody East has fireworks written all over it. Both fighters lost their first Octagon bout earlier this year, but each acquitted himself well, making it a natural for them to return, and what better way to return than against each other. And in another parallel to Cutelaba-Wilson, Blaydes and East are competing in a division that could also use some young rising stars, and the winner here might be someone you’ll be hearing about for years to come.

Ketlen Vieira VS Kelly Faszholz
Despite having just three pro fights, Kelly Faszholz made some impression in her short notice UFC debut against veteran Lauren Murphy in February. Faszholz wasn’t able to secure the win while facing the former Invicta FC champion, but she did pick up Fight of the Night honors. Now the 31-year-old Californian is looking for her first UFC win against newcomer Ketlen Vieira. Unbeaten in six bouts with five finishes, Brazil’s Vieira comes to the Octagon with high expectations, and it’s Faszholz’ job to temper those and put a “1” in her opponent’s loss column.