The wait for UFC 202 is almost over. And while it still may seem like an eternity until Nate Diaz and Conor McGregor enter the Octagon for a second time this Saturday, it’s nearly here, and when the doors open at T-Mobile Arena, fight fans can get right into the action with three UFC FIGHT PASS bouts beginning at 6:30pm ET / 3:30pm PT.

This is the UFC FIGHT PASS Focus for UFC 202.

If you’re not a UFC FIGHT PASS subscriber yet, this is the kind of fight to make you sign up. Neil Magny and Lorenz Larkin are not just two of the best welterweights in the world, but two of the most exciting as well, making this a can’t miss for high-quality action on Saturday night. Larkin has won three of his four bouts at welterweight, with knockouts of John Howard and Santiago Ponzinibbio highlighting his time at 170 pounds thus far. The No. 7-ranked Magny is on an even more impressive tear, as he’s gone 10-1 in his last 11, a stretch that has seen him win three straight over Erick Silva, Kelvin Gastelum and Hector Lombard. The lone knock on Magny is that you can hit him. And considering Larkin’s power, that could be the recipe for an upset. But the key for Larkin isn’t just hurting Magny, but keeping him hurt and getting him out of there. No one has been able to do that yet, as the resilient Coloradan finds a way to recover and win. Like I said, this is a can’t miss. 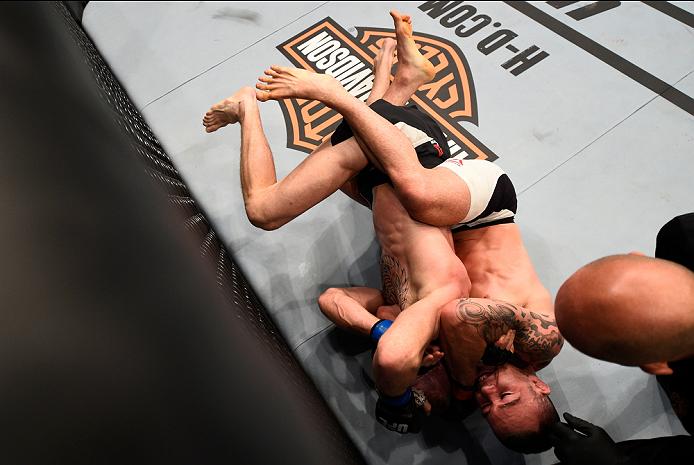 According to Colby Covington, his opponent on Saturday night, Max Griffin, “Talks a bigger game than he walks and I'm going to make him pay for it.” Those are fighting words, but Covington has been in a scrappy mood for a while now, most notably calling out Demian Maia after his June win over Jonathan Meunier. That’s gutsy, but it’s also what you want to hear out of a fighter on the rise, and “Chaos” is certainly on his way up at 170 pounds. Newcomer Max Griffin may be making his Octagon debut, but he’s got eight finishes in his 12 wins and has gone the five-round distance four times, which shows that whether early or late, he can get you. This should be an interesting matchup.

Marvin Vettori vs. Alberto Uda
Nothing against Alberto Uda, but as an Italian-American, don’t I have to cheer for the Italian guy? All kidding aside, Mezzocorona’s Vettori has a pretty high upside, considering that he’s just 22, has 12 fights (winning 10) and is training with the killers at Kings MMA in California. That’s the good news. The bad news for Vettori is that he is being thrown to the wolves immediately against Brazil’s Uda. Yes, Uda lost his Octagon debut against Jake Collier in May, but before the end came, he was putting it on Collier, rearranging his nose before getting caught and finished in round two. This is a tough out for Vettori to face, but if he’s ready for life in the UFC, it’s a test he must pass.