It will be an early one for UFC FIGHT PASS subscribers on Saturday, as the Octagon’s return to Germany will begin at 11:45am ET / 8:45am PT with a full slate of bouts featuring a pair of former heavyweight world champions, top light heavyweight contenders, and a host of prospects from around the globe.

Needless to say, Fight Night Hamburg promises to be a good way to kick off a busy month of September, and this is the UFC FIGHT PASS focus… 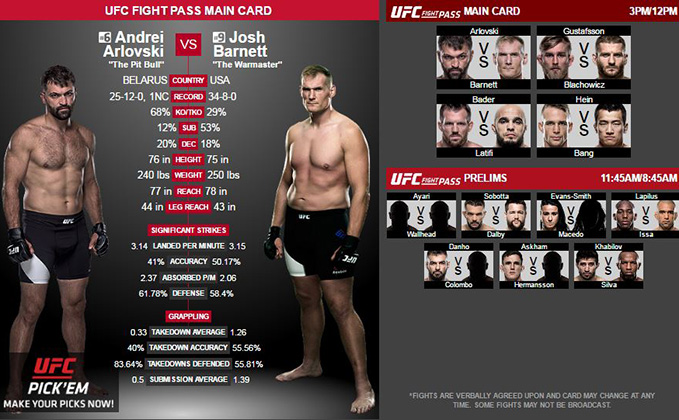 This weekend’s main event is clearly one for the diehard fans who have been waiting to see this dream matchup of former UFC heavyweight champs for years, but it’s also a pivotal one for the future of Josh Barnett and Andrei Arlovski, as both veterans still reside in the top ten, meaning that a victory puts the winner back in the title race, and the loser may wind up on the outside of the top 15.

Back in action for the first time since his razor-thin split decision loss to Daniel Cormier last October, Sweden’s Alexander Gustafsson gets a European home game for his return, though Poland’s Jan Blachowicz should have plenty of support as well. It will be interesting to see what Gustafsson brings to the Octagon after a long layoff and a physically – and mentally – draining loss to the champ.

Ranked 12th at 205 pounds, Sweden’s Ilir Latifi is on the verge of big things in the division, and he can crash the top ten should he beat Ryan Bader. And though Bader lost his last fight to Anthony Johnson in January, he sounds rejuvenated and eager to get back to business

Germany’s Nick Hein always gets an extra boost from fighting at home, and that would normally be bad news for South Korea’s Tae Hyun Bang, but when you consider that the “Korean Cowboy” has fought most of his career on the road, hearing a few boos shouldn’t be an issue.

If you don’t know who Jimmy Wallhead is, go hit Google and then come back. One of the best British fighters of his era, Wallhead has always been that one big win short of getting that call from the UFC. But that’s the past, and now that “Judo” Jimmy is here, expect him to do everything in his power to defeat fellow newcomer Jessin Ayari and make the Octagon his home.

Poland-born Peter Sobotta has been one of German MMA’s true pioneers, and as he gets older, he’s seemingly getting better, despite the occasional hiccup. He will be a stiff test for up and comer Nicolas Dalby, who would break a 1-1-1 deadlock in his UFC career with a win on Saturday.

The youngest woman on the UFC roster, 20-year-old Veronica Macedo went viral with a headkick knockout scored as an amateur, and she hasn’t slowed down as a pro, going 5-0-1 in 2016 alone. She gets a tough assignment in Ashlee Evans-Smith, but no matter who wins, this should be a fight to watch.

France’s Taylor Lapilus has a high upside in the bantamweight division, and to gauge his progress, fight fans will be looking closely at his bout with Brazilian veteran Leandro Issa.

Newcomer Christian Colombo is a banger on fight night, and Jarjis Danho is more than willing to throw hands as well, making this all-Euro heavyweight clash one that may not last too long.

Euro fight fans speak highly of middleweight newcomer Jack Hermansson, but British standout Scott Askham has no intention of being on his highlight reel, saying of his foe, “Jack is nicknamed ‘The Joker,’ but the joke will be on him September 3rd.”

Veteran lightweights fighting for some daylight in a crowded division, Leandro Silva and Rustam Khabilov will likely be calling for a top 10 foe with a victory in Hamburg.