The Memorial Day weekend kicks off a summer of UFC this Sunday on FOX Sports 1 with a card featuring one of the most highly anticipated battles of 2016 between bantamweight phenoms Thomas Almeida and Cody Garbrandt. And speaking of bantamweight phenoms, the featured bout on the UFC FIGHT PASS early prelims will see another unbeaten in Aljamain Sterling, who competes in the biggest match of his young career against Bryan Caraway.

It’s high stakes in the fight capital of the world, and this is a look at the UFC FIGHT PASS portion of the Fight Night Las Vegas card... 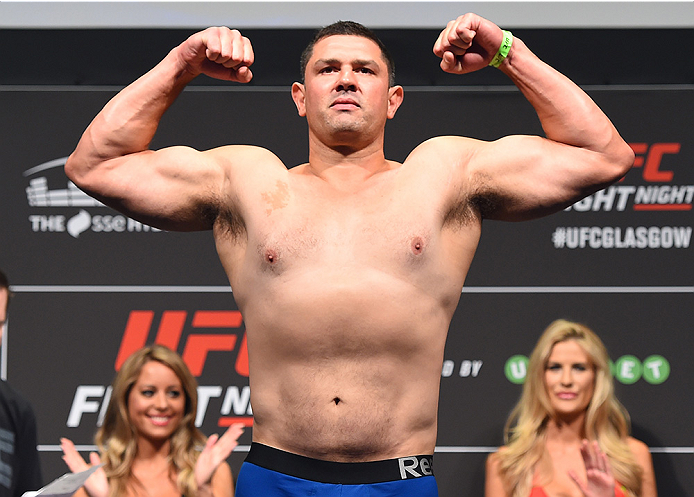 The fireworks don’t show up until the Fourth of July, but this opener will likely get you in the mood, as the heavyweights don’t usually like to leave things up to the judges. Pittsburgh’s Adam Milstead is an Octagon newcomer who arrives with a lot of positive notices, something that usually happens when all seven of your wins are by knockout or submission. Washington’s de la Rocha is 4-1 as a pro with all finishes, but it’s that “1” that everyone is staring at. The 37-year-old de la Rocha lost his Octagon debut in 48 seconds against Daniel Omielanczuk, but it’s key to point out that he did take that July 2015 bout on short notice. So either he’s not ready for the elite level of the sport, or the UFC jitters got to him. If it’s the former, Milstead could make an immediate impact here. The latter, and “The Prototype” could be in for an eye-opening experience against a fighter in de la Rocha who has had a full training camp and is hungry for redemption.

The social media battles are over between Aljamain Sterling and Bryan Caraway and now it’s time to fight. Sterling is unbeaten, confident, and his 12-0 record proved that he belongs in the upper reaches of the bantamweight division. Yet the habitually underrated Caraway is no one to sleep on, and his experience at the elite level of the game will be a big weapon for him to yield come Sunday night. A veteran of nearly 11 years in the game, Caraway’s biggest enemy has been inactivity, as he’s only fought seven times since making his Octagon debut in 2011. That’s the bad news. The good news for “Kid Lightning” is that he’s won five of those bouts. The most impressive may have been his Fight of the Night submission of Mitch Gagnon, and I bring that bout up since Gagnon’s strong suit is his grappling and that’s the go-to game for Sterling, a former college wrestler who has ended half of his wins by submission. In a grappling match, this one could be a toss-up. In a striking match, then it comes down to whose standup game has come the furthest in the last couple years. Sterling has been waiting to unleash his striking attack, while Caraway was impressive in defeating one of the best strikers in the division – Eddie Wineland – in his last bout. This is a close match everywhere, so who wants it more? We’ll find out this weekend.