Here's how every Fight of the Night in 2021 stacked up against each other.
By Gavin Porter, On Twitter @PorterUFCNews • Mar. 3, 2021

UFC Fight Of The Night honors is the type of recognition that fighters look to associate with their name.

Earning FOTN indicates that the bout produces adrenaline, excitement and fireworks in way that stood out from the rest of the card. That stand-out fight could come in the form of a back and forth brawl, a fast-paced slugfest or an incredible display of high-level martial arts.

After each event UFC.com will list out and update the power rankings of each 2020 FOTN ending the calendar year with a complete picture of the year’s best fights.

The criteria applied to each ranking includes: Entertainment value, watchability, competitiveness (back and forth), the type of fight (technical vs brawl vs well-rounded), intensity (crazy moments) and the quality of the finish (if there is one).

Each fight is viewed as if they are in a vacuum, meaning the context surrounding a fight does not factor into the rankings. For example: A title fight could definitely have more implications that the opening fight on the prelims, but the best fight based off the given criteria will receive the highest ranking.

Let's get to the rankings.

Note: These rankings only represent FOTN awards confirmed by the UFC. 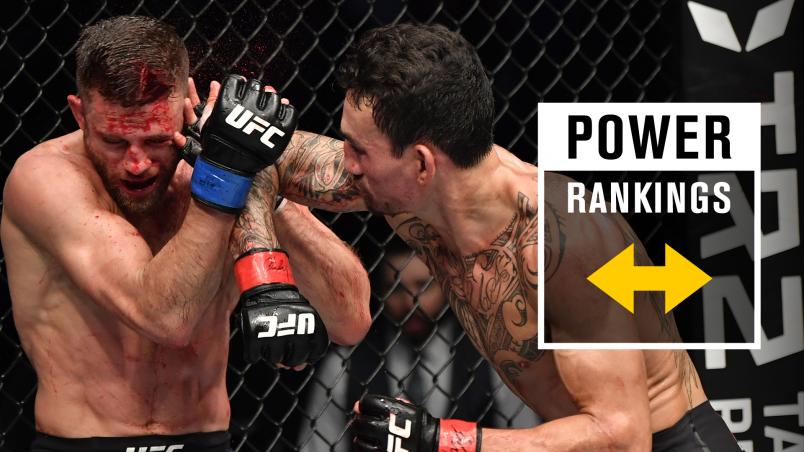 Former UFC featherweight champion Max Holloway delivered one of his best efforts to date in the UFC Fight Night main event on Fight Island, as he shut out ultra-tough contender Calvin Kattar over five rounds.

Holloway got down to business right away, sending straight punches down the middle in rapid-fire fashion. Kattar got in his shots, but not at the pace Holloway was throwing them. And as the round progressed, Holloway wasn’t slowing down, leaving Kattar on the defensive. Add in a couple body kicks and it was a big first round for “Blessed.”

It was more of the same in the second, and though Kattar did have his moments, when it looked like the New Englander might be getting into a rhythm, Holloway would take his work rate to a new level. With a little over a minute left, Holloway unleashed elbows that hurt Kattar and cut him, and just before the horn, a head kick put the Methuen native back in trouble.

Kattar got in a flush uppercut in the second minute of round three that froze Holloway momentarily, and a couple follow-up shots kicked off a nice exchange. Midway through the round, though, Holloway returned the favor with an uppercut that was answered by a right hand by Kattar. In the late stages of the round, Holloway dug to the body before going upstairs, and it was another dominant round.

After a fairly patient start to the fourth round, Holloway opened up with his entire arsenal, hurting Kattar and putting him in danger of being stopped. Yet just when it looked like referee Herb Dean was going to step in, Kattar would fire back, refusing to back down.

Holloway hurt Kattar again in the second minute of round five, the Hawaiian refusing to take his foot off the gas. And he kept that pace until the final horn, capping off one of his greatest performances. 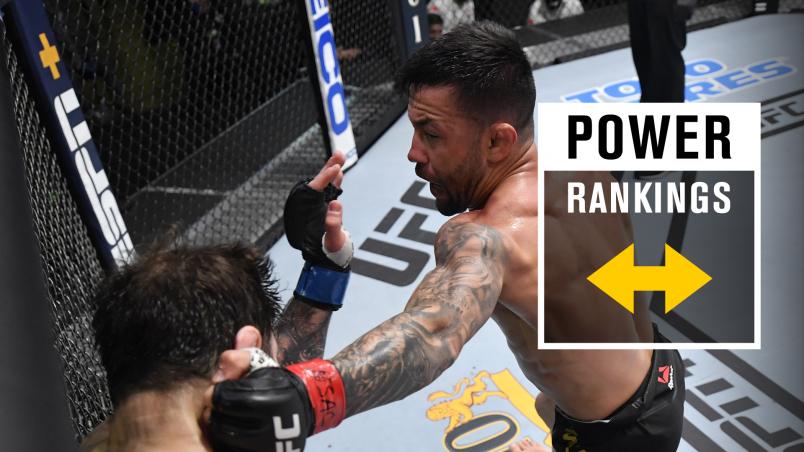 Nearly six years after their first bout in 2015, bantamweight contenders Pedro Munhoz and Jimmie Rivera continued to be perfect for each other in the Octagon. And this time it was Munhoz leaving victorious, with a unanimous decision allowing “The Young Punisher” to even the score with “El Terror” in an action-packed three-rounder.

Both fighters were throwing to end it early as the fight began, but each fighter took the incoming heat without blinking. And there was heat, as the lack of a crowd in the APEX made the sound of every landed punch or kick audible throughout the venue. With 90 seconds left, Munhoz’ kicks had Rivera’s left leg compromised, but the New Jersey product kept pressing, looking for the bomb that would turn things around.

Rivera got the fight to the mat as the second opened, but Munhoz scrambled his way out of trouble and back to the feet. While there the pace was a bit more measured, but the shots were continuing to be thrown with bad intentions by both men. Each kick to the leg by Munhoz was still drawing a visible reaction, though, even as Rivera continued to keep it close with his haymakers upstairs.

A couple inadvertent low kicks by Munhoz rattled Rivera in the third round, but in between, he kept chasing the fight-changing punch, even with his leg getting worse and worse with each shot. Munhoz’s chin didn’t let him down, though, allowing him to get the end of the fight and a decision win. 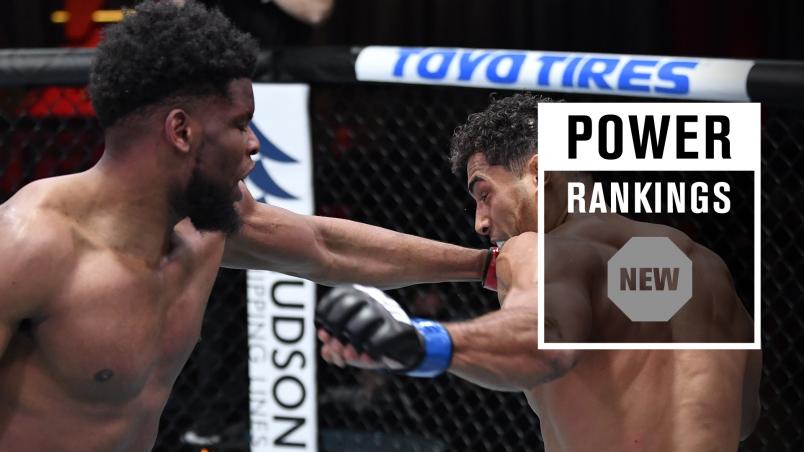 Kennedy Nzechukwu and Carlos Ulberg went to war in their light heavyweight bout until Nzechukwu ended matters via TKO in the second round.

Ulberg took the fight to Nzechukwu immediately, and he rocked him with a left kick to the head. A follow-up barrage kept the Nigeria native on the defensive, and that was just fine with Ulberg, who kept the pace high. Two minutes in, Nzechukwu started to get some shots in, and a fight broke out. With two minutes left, a left by Nzechukwu briefly jarred the New Zealander, and now the two were trading momentum back and forth. But a concerted body attack by Ulberg had referee Herb Dean on the verge of stopping the fight before Nzechukwu roared back with a crisp 1-2 and some more hard shots just before the horn.

Nzechukwu appeared to be the fresher of the two as the second began, and he pressed the action, with only a brief halt to the action after an Ulberg eye poke stopping his forward march. Ulberg wasn’t backing down, though, and while his hands were low, he was still throwing them, along with thudding kicks. But with just under two minutes left, that low guard cost Ulberg, as Nzechukwu landed a flush right hand that dropped the New Zealander hard. A couple follow-up strikes later, and Dean had stopped the fight. The official time was 3:19 of round two.

Official Result: Kennedy Nzechukwu def. Carlos Ulberg by TKO (strikes) at 3:19 of Round 2 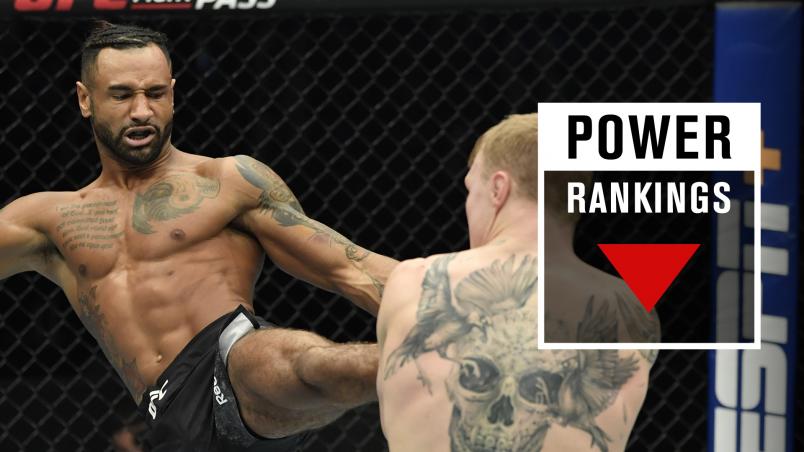 These two didn’t waste any time getting after it, as Jones denied the touch of gloves and connected with a spinning back kick and straight right hand right out of the chute. Not to be outdone, Davis responded by getting loose with his hands, popping Jones with quick, clean punches.

Two minutes into the round, Davis timed a takedown and put Jones on the canvas momentarily, but the Welsh newcomer quickly worked back to his feet. Despite being viewed as the superior boxer, Davis continued to turn to his wrestling, seeking to take Jones to the canvas between increasingly brief stretches of slugging it out with he undefeated former Cage Warriors champion.

Just before the horn, Davis elevated in place and planted his knee on Jones’ chin, but “The Dragon” ate it like a bowl of cereal, making it a fitting finish to an exciting first round.

Jones came out quickly to start the second, crowding Davis, but it was “Beast Boy” that landed the best early exchange, taking the UFC rookie off his feet with a clean low kick. As he’d done throughout the fight, Jones got back to his feet and returned to the offensive, bringing the battle to Davis, who was clearly starting to slow down and reach on his punches.

While Davis continued to land occasional crisp shots and chopping leg kicks, the iron-jawed Jones would not back down, pressing forward relentlessly, attacking with combinations.

With 30 seconds left in the frame, Davis sent Jones’ mouthpiece flying, but the newcomer from Wales wasn’t bothered, driving through a scramble to land up on tap as the buzzer sounded.

Davis showed more quickness and sharpness to start the third, picking his shots and busting up Jones’ mug. But as he’d done throughout, the 25-year-old from Wales refused to take a backwards step, staying in Davis’ face and continuing to sling strikes at the American Top Team product.

Down the stretch, Davis picked his shots, connecting with clean, individual punches, low kicks, and a punishing knee to the midsection, while Jones simply refused to waver, the exhausted duo throwing through to the final horn.

This was an outstanding, close, back-and-forth fight from two exciting lightweight prospects. 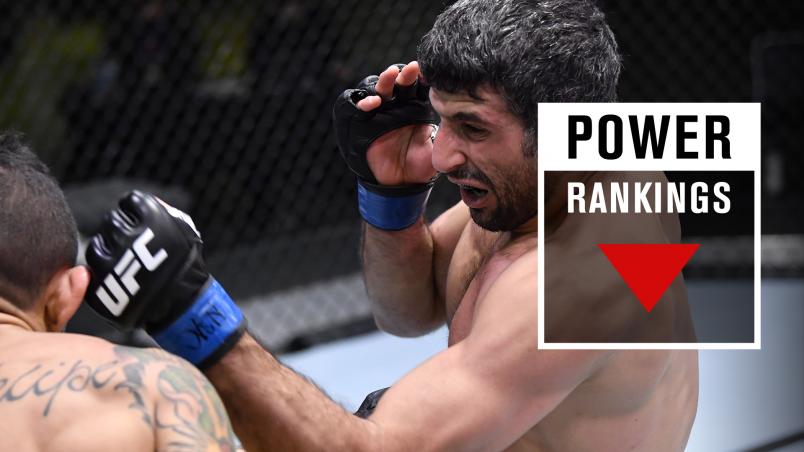 In a rematch between lightweight contenders, Beneil Dariush scored his second victory over Diego Ferreira, taking a three-round split decision.

There was no dip in the high-level action in the opening round, with some exciting grappling and striking exchanges highlighted by a knee to the body by Dariush that stunned Ferreira and some hard punches upstairs that rocked Dariush late in the frame.

Neither fighter backed away from each other as the second opened, the slugging continuing until a takedown by Dariush in the first minute of the round. Midway through, Ferreira got to his feet and separated, but only for a moment, as the two locked up again. With 1:45 left, there was some more striking until Dariush got another takedown and while Ferreira tried to stay busy, it was the Californian remaining in control.

Determined to keep the fight standing, Ferreira was able to do that for much of the final frame, but with a minute left, Dariush got the fight to the mat and kept it there until a late surge from the Brazilian.