It was a night filled with upsets when the UFC landed in Long Island, New York for the first time, as hometown favorite and former middleweight champion Chris Weidman got back on track with a rousing submission victory against surging contender Kelvin Gastelum in the main event.

Despite coming into the fight as a former titleholder at 185 pounds, Weidman was going up against the odds after losing three in a row, but it appears that competing at home agrees with the Long Islander.

Weidman used a powerful wrestling attack to ground Gastelum several times through the opening two rounds as he tried to wear out the former Ultimate Fighter winner, who was giving up a lot of size after moving up from the welterweight division. To his credit, Gastelum did a good job getting back up from underneath Weidman and he even knocked the former champion down but wasn't able to capitalize.

Finally in the third, on the strength of another takedown and ground attack, Weidman secured an arm triangle choke that put Gastelum away as he celebrated a win in front of a raucous New York audience.

Heading into the fight, Weidman was a decent underdog according to fantasy players, with only 46 percent picking him to win going up against Gastelum, who had 54 percent on his side. Ultimately, Weidman not only got the upset win, but he also earned an extra 120 points thanks to his fight with Gastelum being such a tough matchup to pick.

The upsets kept rolling in the co-main event, as Darren Elkins eked out a hard-fought split decision over the always tough Dennis Bermudez in a back and forth affair at 145 pounds.

Fresh off his Comeback of the Year performance in March, Elkins was able to grit out his fifth straight victory, although Bermudez definitely gave him everything he could handle. Elkins was only selected by 23 percent of fantasy players going into Saturday night, so he was definitely a heavy underdog, although 68 percent did predict that he would win by decision.

Patrick Cummins kept the underdog streak alive as he pulled off a split decision win in his fight over local favorite Gian Villante in a light heavyweight affair. Cummins had to endure some serious punishment, but he dug deep during all three rounds to eventually pull off the victory.

Going into the card, Cummins was only selected by 42 percent of fantasy players versus the 58 percent who picked Villante.

Rounding out the upset-heavy main card was Jimmie Rivera, who took out highly-touted knockout artist Thomas Almeida with a unanimous decision win in a thrilling battle at featherweight. Despite having a higher ranking, Rivera was only selected by 33 percent of fantasy players, but he got the job done with arguably the best performance of his UFC career. 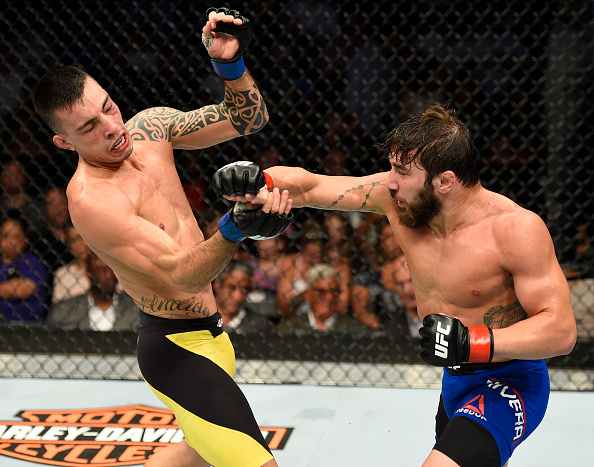 The first favorite to get the job done was Brazilian Alex Oliveira, who earned a very impressive knockout of his own when he finished Ryan LaFlare by knockout in the second round after 75 percent of fantasy players picked him on the card.

Chase Sherman also got his second win in a row on Saturday when he defeated Damian Grabowski with a lopsided unanimous decision win after 74 percent of fantasy players called on him to get the victory.

Kyle Bochniak and Marlon Vera kept the favorites in the game with wins in their respective fights after they were both selected by the majority of fantasy players.

Of course, the underdogs refused to go away on this card as UFC rookie Junior Albini showed up big in his debut with a knockout over top 15-ranked heavyweight Tim Johnson. Albini was selected by only 14 percent of fantasy players while also earning another 120 points because the fight was a close matchup on paper.

As it turns out, this was a rare instance where the underdogs came away with more wins than the favorites by a margin of seven to six judging by the selections made by fantasy players for UFC Fight Night: Weidman vs. Gastelum.