Results As They Happen, Winner Interviews And More From UFC Fight Night: Tsarukyan vs Gamrot, Live From The UFC Apex In Las Vegas
By Thomas Gerbasi, on Twitter @TGerbasi • Jun. 25, 2022

The future of the lightweight division delivered in the UFC Fight Night main event, as Mateusz Gamrot made a late surge to outpoint Arman Tsarukyan via five-round unanimous decision in a fight fought at a high-pace for 25 minutes. In the end, though, key takedowns for Poland’s Gamrot proved to be the deciding factor in the clash of 155-pound contenders. In the co-main event, unbeaten Shavkat Rakhmonov made a major statement with his submission of longtime welterweight contender Neil Magny.

Who Won Bonuses at UFC Vegas 57?

The first minute of the fight produced a wild series of takedown attempts by both men, and in the second minute, it was Tsarukyan who put the action on the mat for the first time. The scrambles continued, with Gamrot getting out of trouble and back to his feet, where the pair grappled briefly until separating, Tsarukyan landing with kicks to the head and body as the round progressed.

Tsarukyan’s kicks continued to pay dividends in the second frame as the pair kept it standing, and in the third, the Armenian battler mixed up his attacks well as he extended his lead. Gamrot did get a brief takedown with under three minutes to go and while Tsarukyan got up quickly, the Poland native remained locked on his foe until the two broke with 1:40 left. A spinning back kick to the body was a solid shot by Tsarukyan in the final minute, but Gamrot didn’t flinch.

Each fighter got in his licks on the feet in round four, with a spinning back fist by Tsarukyan producing a knockdown. Gamrot shook it off and went back to work, leading the action and getting a takedown with a little over a minute left. Gamrot then took his opponent’s back briefly, but Tsarukyan got free.

In the second minute of the final round, Gamrot got a slick takedown and was able to keep Tsarukyan grounded for an extended period until Tsarukyan fought his way free. Another takedown followed, with Gamrot putting more points in the bank as the bout wound down. | Official Scorecards

Shavkat Rakhmonov defeats Neil Magny via submission (guillotine) at 4:58 of round two

Unbeaten Shavkat Rakhmonov proved that he was ready for prime time in the welterweight division, as he dominated perennial contender Neil Magny until finishing him late in the second round.

Rakhmonov caught a Magny kick in the opening minute and took him to the canvas, allowing the “Nomad” to take an early lead. Magny stayed busy from his back as he attempted to escape, but Rakhmonov kept the pressure on with his strikes, even as the Coloradan sought out a submission.

Rakhmonov clinched with Magny against the fence to kick off round two, and in the second minute he got another takedown, dominating the round until he got the guillotine choke submission with seconds to go. The official time was 4:58.

Josh Parisian defeats Alan Baudot via TKO (strikes) at 3:04 of round two

Josh Parisian shook off some early adversity to stop Alan Baudot in the second round of a heavyweight matchup.

The pace between the big men was fast, each throwing a lot of strikes, but it was a chopping right hand at close range by Baudot that put Parisian on the deck midway through the round. Parisian recovered quickly and worked on Baudot’s arm, but the Frenchman wasn’t giving up the position, and he hurt the now bloodied Parisian with hammerfists before the two rose. Yet with 21 seconds left, Parisian scored a takedown and nearly got a finish after landing a series of unanswered blows.

Eager to keep the momentum going, Parisian took the fight back down to the mat to start round two, and again he unleashed strikes from the top position. Two minutes in, Baudot was able to get to his feet, but Parisian returned him to the canvas moments later. Parisian got into the mount position, then took Baudot’s back and fired more strikes until referee Mark Smith stopped the bout at 3:04 of the second stanza.

Thiago Moises defeats Christos Giagos via submission (rear naked choke) at 3:05 of round one

Thiago Moises snapped a two-fight losing streak in lightweight action, as he submitted Christos Giagos in the first round.

Moises (16-6) went all-out for a takedown in the first round, and while he got Giagos (19-10) to the mat briefly, it was as they rose that he had the best success with his grappling as he took his opponent’s back as they stood. And as they battled, Moises sunk in the rear naked choke that forced Giagos to tap out. The official time was 3:05. | Official Scorecards

Rising bantamweight star Umar Nurmagomedov moved to 15-0 as a pro with a shutout three-round unanimous decision win over Nate Maness.

Nurmagomedov got the fight to the mat in the second minute and he kept it there for the rest of the opening round, working steadily to not allow Maness the daylight to get back to his feet.

The Russian up and comer used his kicks to set up another takedown early in round two, and once more, Nurmagomedov didn’t allow Maness back up, making it 2-0 on the scorecards heading into the final frame.

The kicks on Nurmagomedov remained on target in the third round, and while Maness finally had some time to get his offense in gear, once the fight went back to the canvas, it was Nurmagomedov in control and dominant for the rest of the round. | Official Scorecards

Chris Curtis’ takedown defense was the difference in his middleweight bout against Rodolfo Vieira, as he kept the decorated jiu-jitsu black belt standing en route to pounding out a three-round unanimous decision.

Curtis defended Vieira’s first takedown effectively, but the Brazilian stayed locked onto his foe as they grappled against the fence. A low blow by Vieira brought a momentary halt to the action, and when the bout resumed, Curtis remained upright, but Vieira more than held his own on the feet.

Vieira’s standup continued to pay dividends in round two, but Curtis wasn’t far behind him as he dug to the body with his punches and threw in the occasional kick as he surged in the second half of the frame.

Vieira upped his rate of takedown attempts in the third, but Curtis dodged them all while getting in his punches to the head and body. Vieira gamely kept shooting, but it was Curtis making him miss and making him pay until the final horn. | Official Scorecards

A little over a minute into the fight, a flush left hand from Ulberg stunned Nchukwi and it was the beginning of the end for the Cameroon native, who was blitzed by the New Zealander until referee Herb Dean stopped the fight at 1:15 of the opening frame.

Ulberg moves to 7-1 with the win. Nchukwi falls to 6-3. | Official Scorecards

Both fighters went chasing an early finish on the feet, each having success. It was Nuerdanbieke who drew first blood with a right hand that dropped Brown and prompted a takedown attempt. On the way down, it was Nuerdanbieke who wound up on top, but Brown nearly sunk in an armbar that was followed by a Nuerdanbieke leg lock attempt. After both came up empty, the fight went back to the feet, where Brown got in some hard shots before he got taken down by his foe in the final minute. 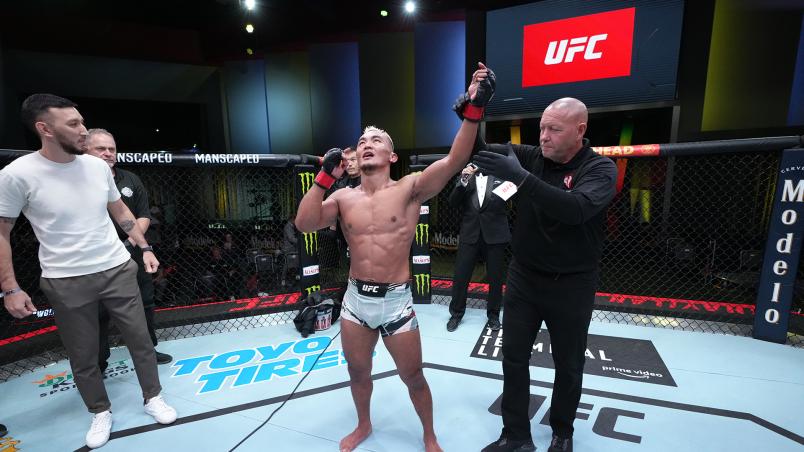 Shayilan Nuerdanbieke of China reacts after his victory over TJ Brown in a featherweight fight during the UFC Fight Night event at UFC APEX on June 25, 2022 in Las Vegas, Nevada. (Photo by Jeff Bottari/Zuffa LLC)

Nuerdanbieke opened up the second round with a takedown, but Brown scrambled his way into a dominant position. And even when he lost it, he kept working for submissions until the horn.

Nuerdanbieke again put the fight on the mat early in the third, and he kept it there, nearly getting Brown’s back for a submission, but the Arkansas native hung tough throughout and stayed out of serious trouble. | Official Scorecards

In a clash of bantamweights, Sergey Morozov defeated Raulian Paiva via unanimous decision.

Forty seconds into the fight, Paiva staggered Morozov with a right hand but was unable to finish off his foe. In the second minute, Paiva repeated his success, but Morozov again recovered quickly, and he did well in ensuing exchanges even while still taking punches. In the final minute, Morozov and Paiva both got in hard shots, wrapping up an action-packed frame.

Morozov got a key takedown a minute into the second round, and while Paiva eventually got upright with under two minutes to go, Morozov remained locked on his foe until the Brazilian finally got separation and worked on a guillotine choke until the horn.

Morozov was the busier fighter in the final round with his striking and grappling attacks as Paiva slowed down, but in the closing seconds, it was Paiva scoring a takedown. | Official Scorecards

Cody Durden defeats JP Buys via TKO (strikes) at 1:08 of the first round

Durden’s striking was on as soon as the fight began, and he rocked Buys, who first tried to slug with his foe, then looked for a takedown, but Durden wasn’t having it, as he kept the heat on until a series of unanswered ground strikes brought in referee Mark Smith to halt matters at 1:08 of the opening round.

Mario Bautista defeats Brian Kelleher via submission (rear naked choke) at 2:27 of the first round

Mario Bautista showed off his ground game in bantamweight action, submitting veteran Brian Kelleher in the first round.

Bautista got the fight to the mat a minute in, and while Kelleher got up quickly, it wasn’t for long, and this time, Bautista smoothly took the back and sunk in the rear naked choke that forced a tap out at 2:27 of the opening frame.

Bautista moves to 10-2 with the win. Kelleher falls to 24-1. | Official Scorecards

Demopoulos’ right hand was on target throughout a competitive opening round, and she added a takedown as well. But a flash knockdown delivered by Frey with two minutes left kept it close.

There was more of the same in the second, Frey technical and choosy with her strikes while Demopoulos had the more telling right hands and some solid knees in close.

Frey’s vision was compromised by swelling around her eye, and Demopoulos bulled her into the fence to start the final frame. After a spell in the clinch, the two separated, and Frey scored well until they locked up again, Demopoulos in control. It was Frey who got the last word with some good shots before the final horn, though. | Official Scorecards