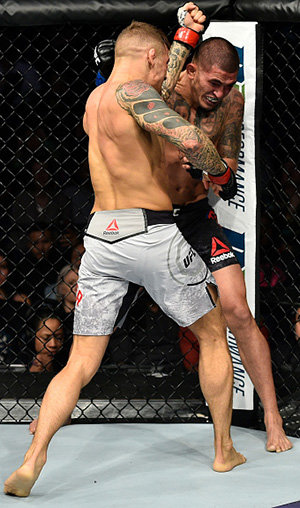 In an action-packed main event thrill ride, Dustin Poirier picked up a huge win over former UFC lightweight champion Anthony Pettis to cap off a great night of fights from Norfolk, Virginia.

While Poirier loves to stand and trade with his opponents, he used a well-rounded attack to go after Pettis on the feet and on the ground after landing several takedowns in the fight. Poirier was relentless with his forward pressure, but Pettis continued to battle back with a pair of triangle choke attempts that were nearly locked in.

Poirier wasn't about to be deterred, however, and after he opened up a pair of cuts on Pettis' face, he went for the finish in the third round after taking the former champion's back and cinching up a tight body triangle. Pettis attempted to roll to get out of the position but ended up popping a rib that forced him to tap out as Poirier celebrated a huge victory in the main event.

Going into Saturday night's card, Poirier was actually a very slight underdog according to the selections made by fantasy players, with 48 percent picking him versus 52 percent going with Pettis. Ultimately, Poirier got the job done with the third-round finish and he also earns an extra 120 points because it was such a tight matchup going into the card.

In the co-main event, Matt Brown added another knockout to his highlight reel as he bludgeoned Diego Sanchez with one of the nastiest elbows ever landed inside the Octagon as he face planted the former Ultimate Fighter winner in what could be the final fight of his career. Brown was still undecided on whether or not to call it a career after his win over Sanchez, but if that ends up being his last fight, the Ohio native went out with an incredible victory.

Brown was certainly a heavy favorite going into the fight, with 79 percent of fantasy players picking him to win and another 60 percent correctly predicting that he would finish the fight by knockout. 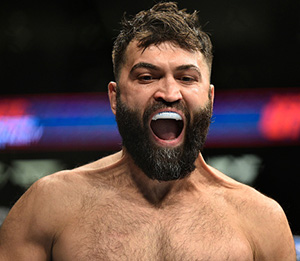 Former heavyweight champion Andrei Arlovski got a much-needed win against Junior Albini, as he got the nod by unanimous decision after three rounds. While Arlovski was coming into the fight after losing five in a row, he was still a solid favorite with 59 percent of fantasy players picking him to win.

Cezar Ferreira picked up an impressive win over former title challenger Nate Marquardt in a middleweight bout on the main card with 56 percent of fantasy players correctly predicting his victory. Ferreira also earned those players another 120 points because it was a close matchup going into Saturday night.

Top five-ranked bantamweight Raphael Assuncao was by far the biggest favorite on the main card with a whopping 87 percent of fantasy players picking him to beat Matthew Lopez, and he not only came through, but also earned a Performance of the Night bonus for a stunning knockout in the third round.

While that was the largest favorite to win on the card, Clay Guida came though as one of the most lopsided upsets as he knocked out Joe Lauzon in the first round with just 29 percent of fantasy players picking him to win in the lead off bout on the main card.

The odds weren't on Guida's side but he still wasn't the biggest upset of the night as it turns out because that honor goes to Marlon Moraes, who picked up a split decision win against John Dodson in a back and forth battle at bantamweight. Moraes was selected by just 19 percent of fantasy players, but he also earned another 120 points because it was a tight matchup on paper regardless of the picks made. 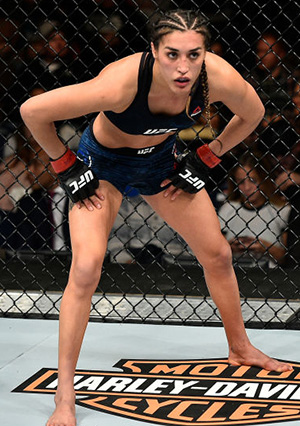 Former Ultimate Fighter winner Tatiana Suarez was ultra impressive as she handed Viviane Pereira the first loss of her career with 68 percent of fantasy players picking her on the card, while Sage Northcutt was another overwhelming favorite with 88 percent on his side as he dished out a three-round beatdown against Michel Quinones.

One other upset of note took place on the early preliminary portion of the card as Karl Roberson looked outstanding in his UFC debut by taking out Darren Stewart by first-round submission. Roberson was only selected by 44 percent of fantasy players, but he also managed to earn an extra 40 points because it was his first fight inside the Octagon since earning his UFC contract as part of Dana White's Tuesday Night Contender Series.

Overall, based on the picks made by fantasy players, seven favorites were victorious at UFC Fight Night from Virginia, with six fights ending as upsets on Saturday night.