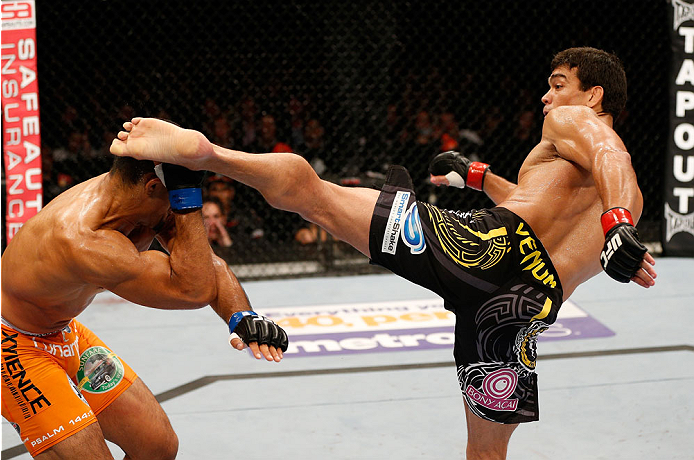 WAS 205 THE MACHIDA ERROR?
I know, I know, Lyoto Machida was a dominant light heavyweight for a while, winning the UFC’s 205-pound title and beating some of the division’s best. But seeing him at 185 for the first time against Mark Munoz made me think how different the career of “The Dragon” might have been had he competed exclusively at middleweight. He looked that sharp and comfortable, and while one fight is a bad determinant of future success, based on that one fight, I can’t wait to see what happens next for the Brazilian.

GUILLARD-PEARSON
The lightweight clash between Melvin Guillard and Ross Pearson was one of the most highly-anticipated on the Manchester card, and for the 1:57 it lasted, it was shaping up to be a battle worthy of the pre-fight hype. Then a controversial finish ensued, with the ‘hand on the canvas denoting a downed opponent rule’ being invoked and resulting in a no contest. Luckily, both fighters received their show and win money, and a rematch would be welcome, but in the future, commissions need to look into this rule and alter it so a legitimate and clear-cut finish to a fight isn’t tarnished.

MANUWA
Poor Jimi Manuwa. Stateside fans have been hearing about the knockout prowess of the “Poster Boy” for a while now, but despite having three fights, three wins, and three TKOs, we haven’t seen one of those decisive finishes, mainly because bad luck has intervened in the way of injuries to Cyrille Diabate and Ryan Jimmo. As Manuwa noted after Saturday’s bout with Jimmo, a win’s a win, but it would be nice to see him get a clean knockout or at least an opponent who makes it long enough for a definitive conclusion to the fight.

STORMIN’ NORMAN
He hasn’t made a lot of noise yet, but if you’re not impressed by the three UFC wins by Northern Ireland’s Norman Parke yet, then you just haven’t been paying attention. Showing off his grappling and striking ability in victories over Colin Fletcher, Kazuki Tokudome, and Jon Tuck, Parke is still a prospect, but if he keeps on the path that he’s on, he may move into the ring of contenders by the middle of next year.

THE BIGSLOW IN THE BIG TIME
Luke Barnatt said it best before his Saturday win over Andrew Craig: “Andrew Craig’s that big stepping stone for me that makes Joe Silva believe I’m a true contender, that I deserve to be here and that I’ll stick around for a little while,” he said. “Everyone knows that I’ve got everything else: I can talk to the media, I turn up and I fight, I’m there to fight and I train every day really, really hard. But can I compete at the top level with the top competition is the question that Joe Silva needs answering, and I think that’s what this fight is about.” Well, “The Bigslow” proved that he can hang with the big boys, and like he said, he’s got all the other traits that can make him a star in the UFC. 2014 should be an interesting one for Barnatt.

BATE ESTACA
UFC color commentator Joe Rogan was right on the mark Saturday when he described Brazil’s Jessica Andrade as a female version of Wanderlei Silva. Andrade is a hunter in the Octagon, and her dominant three round win over Rosi Sexton was a strong statement to her peers in the 135-pound weight class. Andrade vs. Jessica Eye or Sarah Kaufman, anyone? I’d love to see either bout. As for the ultra-game Sexton, there has never been a question that she’s a fighter, through and through, and as such, she will keep going in a fight until she is finished by her opponent, or the referee, doctor, or her corner stops her. Having said that, maybe one of the aforementioned officials or her corner should have intervened and saved her a lot of unnecessary punishment, and not because she’s a woman, as I said the same thing about the punishment Junior Dos Santos took a week earlier against Cain Velasquez. Better to stop a fight a round too soon than a round too late, and I think in both cases, a stoppage before the eventual end would have been welcome.

THIS AND THAT
Good to see Cole Miller back in the win column, though most believe his hard-fought win over Andy Ogle was his second straight, following a controversial decision loss to Manvel Gamburyan. As for a fight with the man he called out following the bout, Irish phenom Conor McGregor, bring it on…Another welcome return to the win column was that of featherweight Jimy Hettes, whose ground game continues to impress…Middleweight appears to be a good fit for TUF Smashes finalist Brad Scott, who notched his first UFC win by submitting Michael Kuiper…Al Iaquinta continues to keep New York MMA in the news with a solid decision victory over Piotr Hallman. Now all we need is the UFC in the Big Apple with Iaquinta, Chris Weidman, Costa Philippou, Ryan LaFlare, Gian Villante, and Dennis Bermudez all waving the flag for Long Island…John Lineker is a terror in the flyweight division, and a bombs away battle with John Dodson would be epic, if “Hands of Stone” can make 125 pounds. Mike Dolce, are you reading this???