Taking a look back at UFC Fight Night: Shogun vs. Sonnen 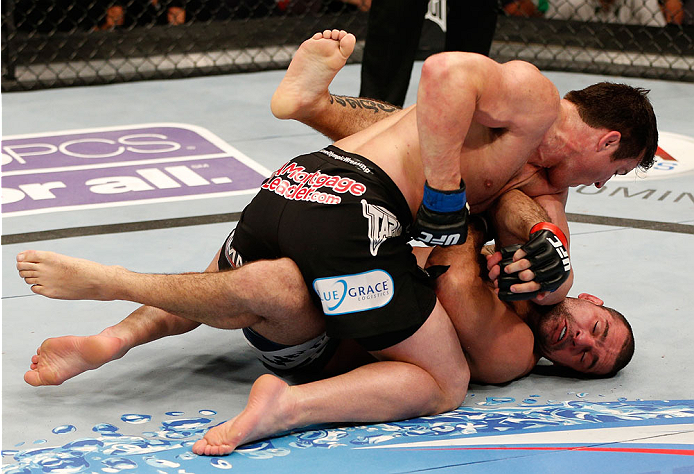 SONNEN SOARS
Say what you want about Chael P. Sonnen talking his way into fights or getting a light heavyweight title shot earlier this year. The bottom line is that on Saturday night in Boston, he showed how good he can be when he submitted Mauricio “Shogun” Rua in the first round. It was a brilliant performance not just because of the way he won and against whom, but that he used his most impressive tools - his speed and his smarts – to get the job done. There shouldn’t be too many critics among the Monday Morning Quarterbacks today, and rightfully so. And if you want to take something else out of Sonnen’s win, it showed just how good the last man to beat him – Jon Jones – really is. Even Anderson Silva didn’t walk through Sonnen the way the light heavyweight boss did.

GANGSTER SQUAD
After Sonnen’s win over Shogun, it appeared as if all of Brazil wanted to mobilize to take out the Gangster from West Linn, with former light heavyweight champs Vitor Belfort and Lyoto Machida the most visible soldiers, as they took to the world of social media to say that they wanted the fight. Is it a case of nationalistic pride to avenge their fallen brother, that they see something in Sonnen’s game that can be easily exploited, or just that whoever gets him will get a megafight guaranteed to put plenty of eyeballs on the event? Whatever the case may be, both Belfort and Machida would be intriguing bouts for Sonnen, but I can’t lie – I want to see him in with another Brazilian next: Wanderlei Silva. 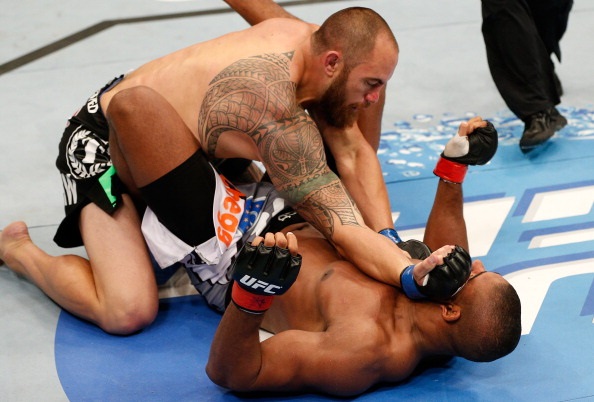 In my pre-fight feature on heavyweight contender Travis Browne, I noted how he goes through life in a way more unconventional than most fighters, a trait that I can appreciate and admire. He also carried that over into his fight with Alistair Overeem last Saturday, as he had to go through a hellacious beating before coming back and knocking out “The Reem” late in the first round. Most fighters wouldn’t have survived the thrashing “Hapa” took, but he showed his heart, determination - as well as a hard head - in weathering the storm and not just lasting out the fight, but winning it, and doing it via knockout. If there were any doubts about Browne’s viability as a legit heavyweight contender, you can probably toss those out the window now. So what’s next? A Browne vs. Fabricio Werdum fight for the number one contender’s spot sure sounds good to me.

THE FUTURE OF REEM AND RUA
Back in February of 2007, Mauricio Rua and Alistair Overeem were battling it out in their PRIDE 33 rematch in Las Vegas, with Shogun emerging victorious a second time via knockout. In the ensuing six years, Rua would win a UFC light heavyweight championship, and Overeem would take the Strikeforce, Dream, and K-1 World Grand Prix titles. Impressive stuff, but after Saturday night losses, the questions aren’t about more championships in their future, but about that future. Rua, who was submitted in the first round by Sonnen, now has two consecutive defeats for the first time in his career, and he is 2-4 in his last six bouts. Of course, there are no slouches on that slate, but after several taxing wars throughout the years, the 31-year-old could probably use a nice break from competition. The 33-year-old Overeem has also dropped two straight, getting knocked out by Antonio Silva and Travis Browne. You could say it’s the price you pay for playing with the big boys, where one shot can end things immediately, and that may be accurate. But if Overeem wants to fulfill the potential most saw for him in the UFC, he needs to get back in the win column in spectacular fashion in a hurry. 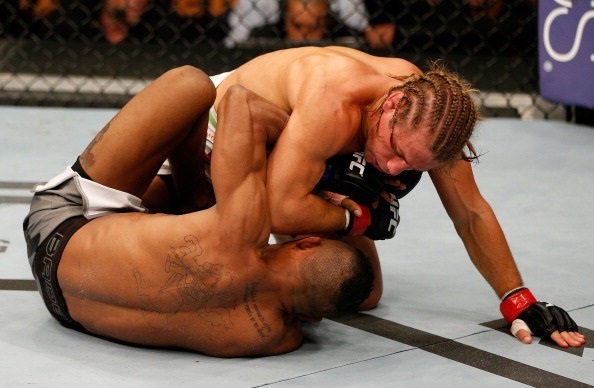 FANTASTIC FABER
Like Chael Sonnen, Urijah Faber took his share of criticism for getting several title shots over the years. But after another stellar performance on Saturday against Iuri Alcantara, could anyone really complain if he’s back at the top of the list for a shot at either interim boss Renan Barao or champion Dominick Cruz once he returns from the sidelines? Not only has “The California Kid” won three straight since he lost the interim title fight to Barao, but he’s finished Ivan Menjivar and Scott Jorgensen and then bounced back from some dicey moments early against Alcantara to put on a ground and pound clinic against the talented Brazilian. So why not Faber vs. another Saturday winner, Michael McDonald, for the next shot at the belt? Not only is it a potentially great fight, but if Faber wins, how could you possibly deny him another title fight? Forget featherweight; I like Faber right where he is now.

MEAN MATT BROWN
I like Matt Brown. Always have. Beyond the gruff exterior, he’s got a dry sense of humor and is a helluva nice guy. But man, I wouldn’t want to have to fight him. Brown fought Mike Pyle, a former training partner who he was friendly with, last Saturday night. He emphatically knocked Pyle out in 29 seconds. It almost reminded me of boxing great Joe Louis’ 1939 fight with John Henry Lewis. The two were friends. Louis knocked his friend out in 2:29 of the first round. So as nice as guys like Brown and Louis can be, when it’s time to fight, it’s a fight. And after six consecutive wins at welterweight, with five of them coming by way of knockout, I think Brown has earned to be in the conversation for a fight against the winner of the November bout between champion Georges St-Pierre and challenger Johny Hendricks.

THE MENACE IS BACK 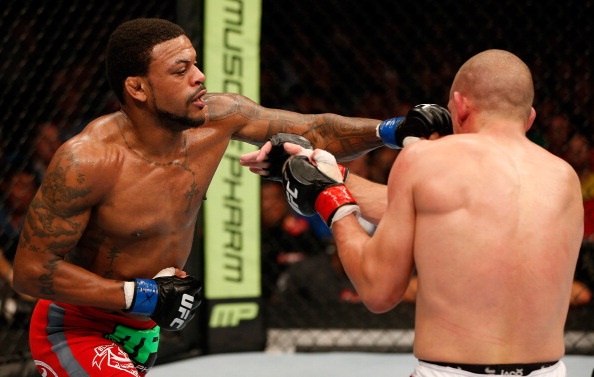 Michael Johnson has had his moments of brilliance over the years in the UFC, particularly during his three fight 2012 winning streak. But he’s never really put it together quite like he did against Joe Lauzon Saturday night. As an underdog fighting in Lauzon’s backyard with a two fight losing streak hanging over his head, “The Menace” showed the best form of his career, using a brilliant mix of movement, striking, and takedown defense to keep Lauzon from getting in gear all night. If this is the Michael Johnson that’s going to show up from here on out, the elite at 155 pounds may start losing some sleep.

NOTORIOUS C.M.G.
Barring a 30 second knockout of Max Holloway, there was no way Ireland’s Conor McGregor was going to live up to the hype surrounding him in the lead-up to Saturday’s bout. But in clearly defeating the always tough Holloway, McGregor did a couple notable things. First, he showed that with all the pressure on him and with the spotlight burning bright, he could perform. Second, when Plan A of a spectacular knockout didn’t pan out and he then injured his knee, he didn’t panic or run out of ideas; he stayed calm, adjusted, and still won the fight going away. It may have not been a furious finish like the one he handed in against Marcus Brimage in his UFC debut, but “The Notorious” Conor McGregor certainly looks to be the real deal.

SUPER STEVEN STRIKES AGAIN
Another talented featherweight who won big Saturday night was Utah’s Steven Siler. Of course, he knocked out former WEC champ Mike Brown in 50 seconds without the attention afforded to the aforementioned Mr. McGregor, but that hopefully changes now. Siler is the real deal, and after winning five of his six UFC bouts, he’s likely to get a top ten foe in his next outing. I’m guessing “Super” Steven will perform up to his abilities yet again too.

THIS AND THAT
Michael McDonald showed no ill effects from his February loss to Renan Barao, turning in a brilliant effort against Brad Pickett. McDonald is still on my short list of fighters who will one day wear UFC championship gold. I also think that he’s the hardest puncher in the division, though I’m sure Eddie Wineland would have something to say about that…As for “One Punch” Pickett, I may get into the fights for free, but if I didn’t, I would pay to watch this Brit fight. He never disappoints…Cheering Pickett and his Team Lloyd Irvin training partner on Saturday night was bantamweight contender (and a former Pickett foe) Mike Easton. And while he was a few rows behind press row, you could hear “The Hulk” clearly throughout, making it a good guess that he is currently walking around Maryland without a voice….Light heavyweight prospect Ovince St. Preux has some hammers doubling as fists. If he tightens up his technique a bit, he could be a danger to anyone at 205…Before the UFC Fight Night card, my pick for Fight of the Night was Diego Brandao vs. Daniel Pineda, and before a late lull, I thought they had it wrapped up. I wouldn’t mind seeing these two meet again down the line…It was good to see John Howard pick up a win in front of his Boston fans in his return to the UFC, though the one thing I took away from the fight was ‘what if?’ What if Uriah Hall let his hands and feet go and showed off the form he had during season 17 of The Ultimate Fighter. If he did that and still lost, there would be a lot more positive vibes about the talented New Yorker than there were after the fight…Gamburyan vs. Miller? I had it for Miller, and I’m not the only one who felt that way either…Gotta admit that I was surprised by the result in the James Vick-Ramsey Nijem bout. Great win for Vick though after a long layoff. Plus, he only has five pro fights, so beating Nijem is a nice feather in his cap.