Iaquinta didn’t waste any time going after Hallmann, both standing and at close range, but Hallmann was unmoved by either attack, as he scored well with left hooks to the head. Iaquinta kept charging forward, mixing up his punches and kicks, and both fighters were able to have their moments in a fast-paced round ended by a Hallmann takedown.

Hallmann got another takedown early in round two, but with Iaquinta rising to his feet immediately, he nullified that advantage quickly, and after taking some hard punches, the Long Islander hurt Hallmann with a right hand. The Polish Navy veteran showed his resilience and avoided the finish, getting back to business with a minute left.

The New Yorker avoided two takedown attempts as the third round began, and he utilized an effective stick and move strategy. A brief halt to the action came after Iaquinta inadvertently poked Hallmann in the eye, but the pace picked right up where it left off, with Hallmann scoring two takedowns and Iaquinta getting stronger and stronger with his standup before scoring with several takedowns of his own in the closing moments.

The Ultimate Fighter 17’s Luke Barnatt showed that he is indeed the real deal, as the unbeaten Brit from Cambridge showed off his striking and ground game en route to a second round submission victory over Andrew Craig in middleweight action.

Craig was the busier of the two while standing, showing no difficulty in closing the gap on his 6- 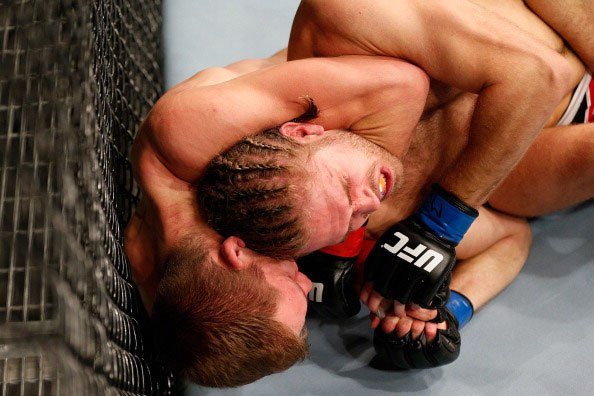 foot-6 Barnatt as he moved in with fast and hard shots and got back out of range. Barnatt picked up his pace as the round wore down, and in the final minute, he struck gold with a straight right that dropped Craig hard. Barnatt hesitated slightly to celebrate, perhaps allowing the Texan to clear his head, even though his legs were still wobbly as he walked back to his corner at round’s end.

Both fighters traded big shots in round two, this time with Barnatt holding the edge, as an uppercut put Craig on the deck a second time. In the second minute Barnatt took Craig to the mat, and moments later he finished the bout with a rear naked choke that produced a tap out at the 2:12 mark.

Women’s bantamweight prospect Jessica Andrade nabbed her first UFC win in impressive style with a three round shutout of Rosi Sexton, but Manchester’s Sexton may have left the biggest impression with her gallant stand in the face of a relentless and punishing attack from her opponent.

A left hook from Brazil’s Andrade rocked Sexton in the first 30 seconds of the bout, but the veteran survived the follow-up barrage, and after clearing her head, she looked for a takedown. Andrade wasn’t having it though, and she kept ripping off power shots. Sexton tried to counter, even though nothing was stopping the forward march of “Bate Estaca.” With 1:10 left, Andrade took the fight to the mat, only to stand up seconds later after Sexton threatened with her ground game. A right hand by Andrade dropped Sexton just before the bell, with an illegal knee following, but the Brazilian escaped with a warning from referee Neal Hall.

Another hard right rocked Sexton as the second round began, but the Brit shook it off and came back firing. The only thing was, she wasn’t packing the same power as her opponent was, and matters just got progressively worse as the round went on. No one would have complained if the fight was stopped anytime from this point on, and while Sexton did get a takedown in the final 10 seconds of the stanza, she was unable to do anything with it.

In the third, the courageous Sexton kept trying to win, but she was simply outgunned by Andrade, whose performance left no doubt who the winner was when the final bell sounded.

Featherweight veteran Cole Miller got back in the win column, holding off a late charge from Sunderland’s Andy Ogle to win a three round unanimous decision.

All three scores read 29-28 for Miller, who called out Irish phenom Conor McGregor after the bout.

Miller’s right hand found the mark early and often as the fight began, forcing Ogle into a clinch 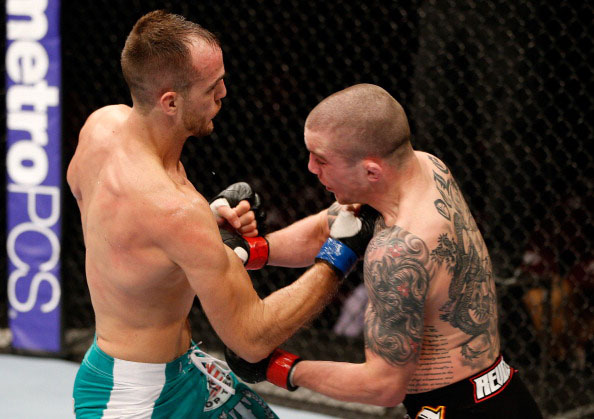 once he cleared his head. After some back and forth action against the fence, Ogle got the takedown, but it was Miller (20-8) taking his foe’s back, not a place the Brit wanted to be in. Ogle was able to survive though, making it to the end of the round no worse for wear.

Ogle (9-3) effectively closed the gap on the taller Miller to open the second round, but the result was a guillotine choke attempt from the American. Usually, that spells game over, but the game “Little Axe” broke loose and stayed in the top position. A sweep by Miller put Ogle in trouble once again, with only the bell seemingly saving him from an early trip home.

Trying to turn the bout into a brawl in the third, Ogle landed some hard shots on Miller, even while eating a few of his own. A takedown followed, with Ogle trying to work his ground and pound attack. By now, Miller was cut under his right eye, and Ogle was intent on turning things around. And though he left it all in the Octagon in an effort to do that, it was too little too late to take the decision.

Cole Miller discusses his victory in his post-fight interview

Returning from a nearly yearlong layoff due to injury, featherweight prospect Jimy Hettes showed no signs of Octagon rust in submitting late replacement Rob Whiteford in the second round.

Whiteford (10-2), who replaced the injured Mike Wilkinson, started strong with his strikes and his grappling, but once Hettes threw him to the mat with 90 seconds gone, the Pennsylvania submission wiz went to work, continually threatening the finish from various positions before Whiteford found some daylight in the final 30 seconds of the round.

Hettes (11-1) took the fight right back to the mat in the second round, and after giving Whiteford a ray of hope by letting him on top, “The Kid” sunk in the triangle choke finisher, with referee Neal Hall halting the bout when Whiteford went to sleep. The end came at 2:17 of the second frame.

A finalist from The Ultimate Fighter: The Smashes, England’s Brad Scott made his move up to the middleweight division a successful one, as he submitted Michael Kuiper and picked up his first UFC win.

It was a dominant and patient performance for the Melksham product, who was in control from start to finish. Initially using his strikes to put Kuiper against the fence, Scott sought the takedown, but didn’t get it. After referee Marc Goddard separated the two with 1:38 remaining, Scott again locked up with the Netherlands native, but this time, an explosive burst from Kuiper designed to break up his opponent’s grip instead landed him in a front choke, with Kuiper tapping out at the 4:17 mark.