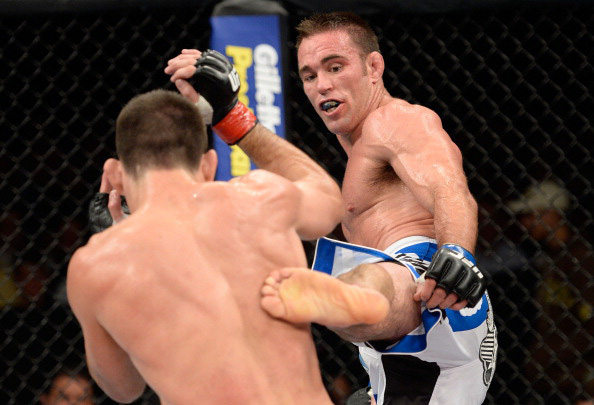 “That was one of my toughest two or three fights of all-time, right up there with GSP (Georges St-Pierre) and Dan Henderson,” said Shields, unbeaten in his last four bouts. “He gave me all I can handle.”

Maia closed the distance on Shields as soon as the bell rang, getting the American to the mat before the first minute elapsed. While on the ground, Maia wasn’t able to pass Shields’ guard, but he did stay busy with punches to the head. Shields soon fought his way back to his feet, but another Maia takedown ensued. As Shields rose, Maia held on, but the former Strikeforce champion reversed position and got on top as the two went to the mat. While in the top spot, Shields fired off strikes but was unable to improve his position, ending the round in a stalemate.

Shields got the first and only takedown of the second stanza, pushing Maia against the fence in the process. A series of elbows followed, and even though Shields wasn’t able to get to more than half-guard on his foe, he stayed active enough to prevent a restart by referee Marc Goddard.

After striking it out for the first minute of the third, the two grapplers scrambled for position, with Shields showing some nice defense to reverse Maia and get back to his feet. Maia followed up with a takedown, but Shields reversed again and got the top position, putting Maia on his back once again. The action stalled from there, but Shields was continuing to dominate.

Neither fighter could gain an edge in the first three minutes of round four, but then Maia was able to turn a Shields takedown attempt into a takedown of his own. A minute later though, another stalemate forced a restart by Goddard, with some ineffective striking by both fighters closing out the frame.

Shields and Maia traded strikes in the opening minute and a half of the final stanza, but there was little behind the punches and kicks. Ensuing takedown attempts from Shields came up empty, returning the bout back to the feet, where Maia finished strong with some solid strikes just before the final bell.

Long maligned for his grinding victories, welterweight standout Dong Hyun Kim brought the “Stun Gun” back in his bout against rising star Erick Silva, knocking the Brazilian out in the second round.

The win marked Kim’s first knockout and finish since his UFC debut against Jason Tan in 2008. 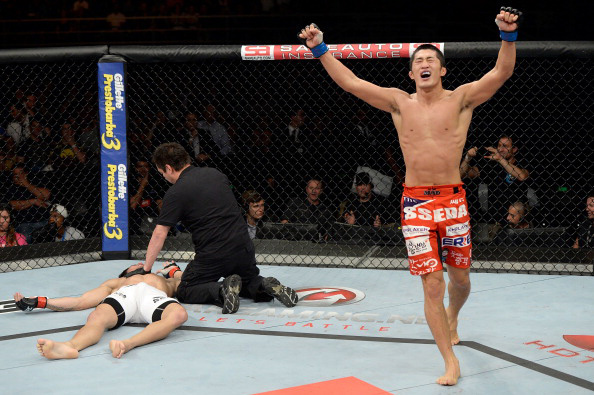 Kim (18-2-1, 1 NC) was relentless in pursuit of the takedown as the bout began, with Silva (15-4, 1 NC) forced to go on the defensive until the second minute, when he started to let his strikes go. He wasn’t able to Kim at bay for long, and as the two went to the mat at the midway point of the round, Kim was able to get into the mount position. Silva was resilient off his back, escaping the mount, but Kim did not relinquish the top position, frustrating the Brazilian.

With Kim again looking for the quick takedown to start the second, Silva unleashed a barrage of punches that rocked the South Korean and gave the Vila Vehla prospect a little breathing room. Once the frenetic start slowed, Kim was a little more cautious on the way in, but he still kept moving forward. As the round reached its halfway point, Silva began to land more shots on his tiring foe, but just when it appeared that the tide was turning, Kim unleashed a crushing left hand that knocked Silva out, with the end coming at the 3:01 mark.

Despite forfeiting a percentage of his purse for weighing in at 208 pounds for a light heavyweight bout, Thiago Silva was still able to secure a victory over Matt Hamill, using a leg kick-based attack to win a three round unanimous decision.

Hamill held his own while standing with Silva in the early going, and as Silva started breathing heavy 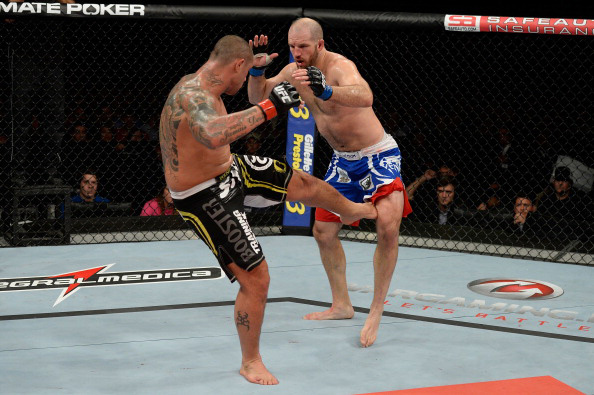 less than two minutes in, it looked like Hamill was on his way to an upset. A hard right hand with 3:20 remaining reminded people of Silva’s power though, and as the round went on, the Brazilian found his mark more frequently. Hamill’s striking did look sharp though, and while Silva landed the harder shots, the greater number of blows went to “The Hammer.”

Growing more confident by the second, Hamill kept the momentum of his strong first round going in the second, scoring a takedown and even tossing in a spinning back elbow. Silva responded with some hard kicks to the leg, slowing his foe’s march forward, and with less than two minutes left, Silva’s right hand hurt and dropped Hamill. Hamill found his way back to his feet, but fatigue appeared to set in pretty hard on the Ohio native as he rose. A late takedown did leave Hamill in a positive spot as the round ended though.

Silva’s leg kicks were taking their toll on Hamill, but before the Brazilian could take advantage, an inadvertent eye poke by Hamill halted the action. Once it resumed, so did the leg assault, with Hamill only able to buy a brief respite by locking up with his opponent against the fence. Once breaking free, it was all Silva, but he wasn’t able to put the gutsy Hamill away.

Light heavyweight brawler Joey Beltran started and finished strong in his bout against Fabio Maldonado, but in between, Florianopolis’ Maldonado did enough to sway the judges and get a hard-fought split decision win. 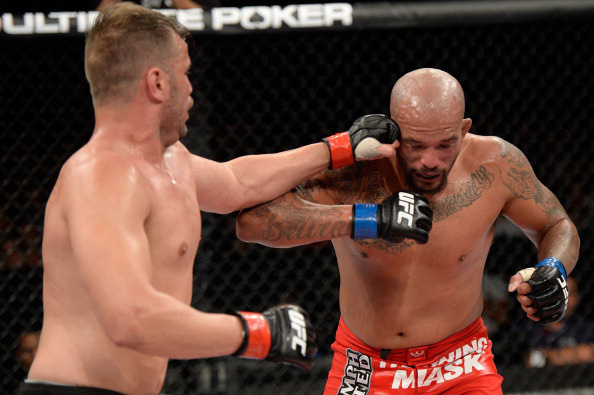 Beltran dominated the first five minutes of the bout, smothering Maldonado against the fence while ripping off shots to the head and body whenever available, and he didn’t stray from that strategy in the second round. Maldonado was able to land with hard shots when he was given room to punch, but those opportunities were few and far between. With less than two minutes left though, Maldonado appeared to rock the tiring Beltran briefly, allowing the Brazilian to get his punches off more frequently.

For the first two minutes of the final stanza, Maldonado had great success peppering Beltran from long range, but the Californian was then able to buy some time when he locked Maldonado against the fence. After a restart from referee Mario Yamasaki, Maldonado resumed his attack, but Beltran kept coming, finishing strong with a fierce assault against the fence in the final minute. 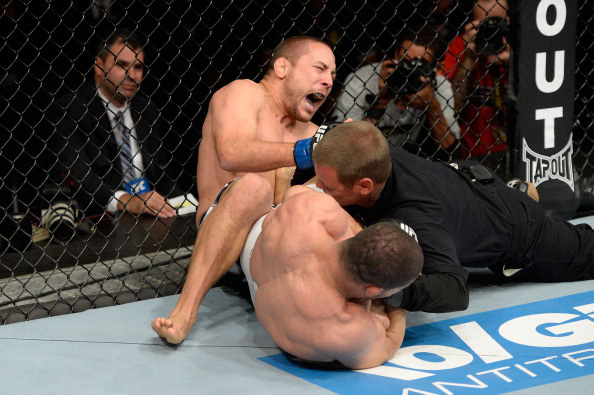 Pierce went on the attack immediately, getting a takedown of Palhares, but that was the beginning of the end for the Portland contender, as Palhares immediately went for his trademark leg lock. Pierce got loose the first time, but the second time the Brazilian got his hands on him, it was game over, with an ankle lock forcing a tap less than a minute into the fight.

In an entertaining clash of bantamweight contenders, Raphael Assuncao outlasted TJ Dillashaw via split decision over three rounds, extending his winning streak to five in the process.

"It was a close fight but I think I got the better of him in the striking department," said Assuncao. "I wasn’t exactly surprised with his game, because I knew how dynamic he was, especially with the high kicks and the attack from the back. In terms of what’s next, I don’t know, the situation in my division is still a bit undefined. I’m not one to call out another fighter.”

Dillashaw got the bout to the mat in the second minute of the first round, but Assuncao didn’t stick around long, returning to the feet and countering well. As the two scrambled three minutes in, 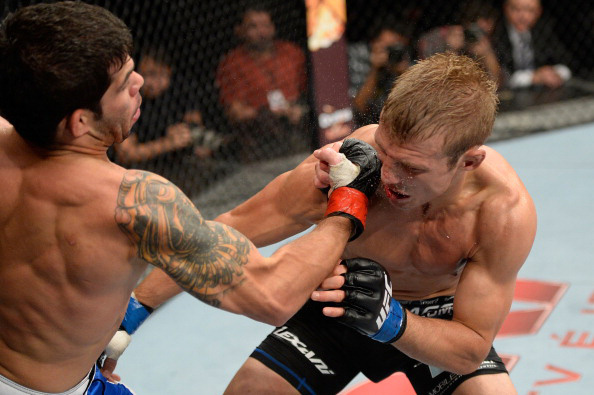 Dillashaw took Assuncao’s back while standing and went for a rear naked choke. As the bout went to the mat, Assuncao looked to be in trouble, but he was able to get free. Another attempt followed immediately, but again Assuncao got loose and made it back to his feet, leaving him to trade with his foe for the rest of the fast-paced round.

Sporting a mouse under his left eye from the opening round’s festivities, Assuncao pressed forward and stayed busy, picking his shots well and tagging Dillashaw with a hard right. A subsequent takedown attempt by Dillashaw was met with submission tries by the Brazilian, and though he didn’t get them, he was building momentum with each offensive burst. With a minute left, Dillashaw – now bleeding from the nose - got his takedown, but Assuncao got right back up, drawing a roar from the crowd.

The frenetic action of the first two rounds understandably slowed in the third, but it was no less intense, as Assuncao opened a cut over Dillashaw’s right eye, and the American continued to walk down his foe while looking to land power shots or get the takedown. When it was over, it was Assuncao with his hand raised, a verdict that didn't sit well with Dillashaw.

“I didn’t lose that fight," he said. "I had the takedowns, I had the Octagon control, I had most of the significant strikes, I had all the damage. He’s a good fighter and it was a close fight, but I won. That’s what you get for leaving it to the judges.”