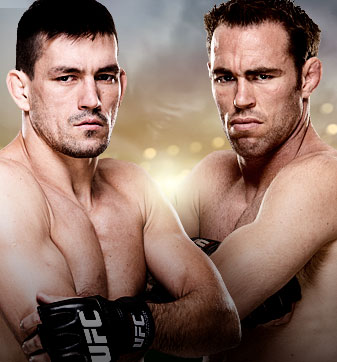 Two of the best submission fighters in the history of mixed martial arts will get together for the main event of UFC Fight Night in Brazil this Wednesday night, as multi-time Brazilian jiu-jitsu champion Demian Maia heads home to face American grappling expert Jake Shields.

Also on the card, welterweights Erick Silva and Dong Hyun Kim square off with both men trying to make an impact in a division that's already filled with top ten talent, so making a great impression is key in this one.

UFC Fight Night will also mark the return of former Ultimate Fighter favorite Matt Hamill against Thiago Silva, while Rousimar Palhares will make a move down to 170 pounds to face Mike Pierce.

There are plenty of tight matchups on the card, so in today's fantasy preview we will focus solely on the main card, where it's a game of inches determining which fighters will leave Brazil as contenders and which ones will be exposed as pretenders.

1 ) Many times when two great fighters from similar backgrounds meet in the Octagon they cancel each other out so well that the bout goes in the complete opposite direction from what they're known to use best in a fight.  For instance, when two highly-touted wrestlers meet, neither one ends up going for a takedown for an entire fight.  In the UFC Fight Night main event, it's hard to imagine either Demian Maia or Jake Shields abandoning their ground game with both being extremely high level in Brazilian jiu-jitsu.  Maia has more grappling accomplishments than he can fit on his mantle at home, and Shields is considered by most to be one of the best jiu-jitsu practitioners to ever reach the highest levels of MMA.

Maia has the third most submission wins in modern UFC history, while also going for the third most submission attempts when he was still competing as a middleweight.  Shields, meanwhile, has 10 career submission victories and has never been submitted in 36 career fights.  Both fighters are highly proficient with takedowns as well - Shields has the second highest takedown attempts average in welterweight history and Maia has never lost a fight when he lands at least one or more takedowns.  Daunting statistics for both fighters, but both Maia and Shields have worked tirelessly to improve their standup in the last few years as well.

If there is a slight advantage right now it falls on the side of Maia, who has looked virtually unstoppable since dropping to welterweight.  Maia's ground control and wrestling has looked better than ever since shedding the extra 15 pounds and finally stepping into a fight as the bigger man.  He comes into this one as a -275 favorite over Shields, who comes back as a +220 underdog.  Maia has to be wary of Shields' takedowns, which have been overwhelming in past fights, and if he can control the clinch it could be a long night for the Brazilian as well.  Sometimes, however, it's hard to pick against momentum and Maia has a lot of it right now.  He won't submit Shields and the scrambles on the ground should be a thing of beauty, but ultimately Maia should be able to do enough over the course of five rounds to get the decision.

2) Erick Silva has already fought a fighter very similar to Dong Hyun Kim and it ended in a  loss for the Brazilian prospect, but has he learned his lesson? Silva's lone loss in the UFC came to Jon Fitch, and while the fight was extremely exciting and a back and forth affair, when it was all over, the Brazilian had a defeat etched on his resume forever.  He's facing a scarily similar fighter this time in Kim, who, like Fitch, has incredible ground control.  Kim controls his opponents 54.2-percent of the time, which gives him the third highest rate in welterweight history.  He also has the second largest proportion of ground strikes in welterweight history.  If Kim gets an opponent down, he keeps them there and they struggle to get up again.

Silva does have the counters to give Kim problems, and if we learned anything from the fight with Fitch it's that he's impossible to keep down without a struggle.  Silva is the favorite here as well with -260 odds in his favor and Kim back as the underdog at +205.  Just like the main event, the safe bet rides on Silva.  He has to be careful not to get sucked into Kim's game, but following the loss to Fitch it's hard to imagine Silva hasn't improved his takedown defense enough to stuff the attacks from the Korean.  A few takedowns blocked and Silva can start to let his hands go on the feet and that's where Kim could run into serious trouble.

3) The light heavyweight fight between Thiago Silva and Matt Hamill truly is an exercise in the old 'striker vs. grappler' fight in MMA.  Silva is aggressive, nasty and powerful on his feet and while Hamill is no slouch (he actually holds the second most knockouts in light heavyweight history), his primary weapon in this fight will be his wrestling.  In addition to his knockouts, Hamill has the third most takedowns in light heavyweight history and he's averaging three takedowns over the course of 15 minutes - nearly triple what his opponent pulls off or attempts.  On the other hand, Silva is a violent striker with knockout power in his hands, knees and kicks, and he will come after Hamill looking to put him away.  Remember Hamill's knockout record? Well he shares that honor with Silva, who is unrelentingly vicious, and looked on point in his last fight, where he knocked out former Strikeforce champion Rafael “Feijao” Cavalcante.  If Silva can keep Hamill away early, look for him to eat the former Ultimate Fighter alum alive with kicks and eventually punches to break that tie and claim the spot as the second best knockout artist in light heavyweight history.

4) If you haven't noticed the success of Team Alpha Male lately, you must not be paying much attention.  The camp based out of Sacramento has gone undefeated in the UFC since adding new head coach Duane “Bang” Ludwig, and now it's bantamweight TJ Dillashaw's turn to try and keep the streak alive when he faces Raphael Assuncao at UFC Fight Night.  The secret is already out on Dillashaw because oddsmakers have him secured as a -240 favorite over the veteran Assuncao at +190.  Dillashaw has to be able to implement his game plan, and Assuncao won't make it easy on him.  A former college wrestler, Dillashaw has the highest takedown average in UFC/WEC bantamweight history, landing 4.1 takedowns per 15 minutes, but Assuncao is going to make him work for it in this fight. Assuncao has an astonishing 82.4-percent takedown defense rate, and he's undefeated at bantamweight.  That said, Dillashaw has Ludwig in his corner, and under his tutelage his striking has not only gotten better, it's become quite devastating.  Dillashaw has the highest striking rate in UFC/WEC bantamweight history and he lands at 56-percent accuracy. He mixes things up well, and should keep Assuncao off balance for all 15 minutes to get the decision win.