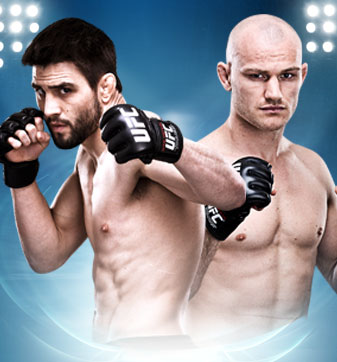 It's been four long years since Carlos Condit debuted in the UFC, but the memory of losing his first fight to Martin Kampmann still haunts him to this day. On August 28 in Indianapolis, Indiana, Condit will get his chance at revenge when he faces Kampmann for a second time in the main event of UFC Fight Night.

The card will mark the UFC's return to Indianapolis for the first time in nearly three years, and the welterweight showdown between Condit and Kampmann will lead the event, along with a stacked undercard of up and coming talent, including former Ultimate Fighter winner Kelvin Gastelum making his first appearance since winning the reality show competition earlier this year.

In today's fantasy preview we'll break down some of the key fights on the main card that will air live on Fox Sports 1, including the main event between Condit and Kampmann:

1)    Carlos Condit and Martin Kampmann is as good a fight as you'll see all year. These two welterweights are not only the best of the best in the division, but stylistically the way they match up pretty much guarantees excitement. Their first fight was a back and forth war, with Condit looking for the knockout and Kampmann consistently dragging the fight to the mat to do damage. Both men know each other very well, so where they separate this time comes down to a game of inches

Condit has been working extensively on his wrestling lately, going as far as bringing in 2012 Olympian Jake Herbert to lead his camp. It could mean a big difference from his first fight with Kampmann, where the Dane went a perfect five for five on takedown attempts. If Condit can stifle Kampmann's takedowns, his attacks on the feet are nothing short of devastating. Condit loves to beat up an opponent's entire body, landing 51 percent of his strikes to the head, 19 percent to the body, and 29 percent to the legs. Condit has to be aware of Kampmann's guillotine choke, which is nasty (he's attempted it 12 times in his UFC career), but if this fight stays standing it favors "The Natural Born Killer."

Condit will enter the fight as a -245 favorite, with the comeback on Kampmann at +195, and the oddsmakers have this one right on the money. Condit should win if all the wrestling he's been doing lately pays off, and with a 93 percent finishing rate in his career, the judges can probably take the night off.

2)    Rafael dos Anjos has been on quite a run lately, but he might collide with a brick wall for his next fight. Dos Anjos will take on Donald "Cowboy" Cerrone at UFC Fight Night, and it could be a tough night for the Brazilian. Make no mistake, dos Anjos has earned his spot in the lightweight division rankings, but lately he's become more and more enamored with the striking game, and that could backfire against Cerrone. The odds on the fight are pretty close, with Cerrone as a -170 favorite to Dos Anjos as a +145 underdog, but this is one time where the odds may split even further apart by fight time. Cerrone lands 5.56 strikes per minute, second best in the division, and has only spent 16 seconds on his back since coming to the UFC. In other words, this fight is probably going to be on the feet for most of the night. Cerrone has shin-battering leg kicks, and he has no fear of stepping into punches with his 73-inch reach. Dos Anjos is tougher than a well done steak, so he won't go away easy, but he might spend 15 minutes eating shots from Cerrone, which ends with him losing a unanimous decision.

3)    Kelvin Gastelum is one TUF alum that has a bright future ahead of him. Gastelum won last season's edition of The Ultimate Fighter, and then immediately announced his move down to 170 pounds, where he debuts at UFC Fight Night. Gastelum is a fast, elusive wrestler with a great submission game and rapidly developing striking. He draws late replacement Brian Melancon, who looked very impressive in his debut fight in the UFC, but he's got a tougher matchup this time around. Gastelum has great takedowns, and he is lightning quick to get in on his shot and doesn't usually give up until his opponent is the floor. He's coming in as a -240 favorite over Melancon, who is a +190 underdog. Just like the main event and co-main event, the oddsmakers are right on the money and Gastelum should walk away the victor and he could do it by submission inside the distance.

4)    The final fight to watch on the main card for UFC Fight Night is the bantamweight matchup between Erik Perez and Takeya Mizugaki. Perez is one of the top prospects in the division, training out of Greg Jackson's gym in New Mexico, and fighting on the main card could be just the recipe he needs to get noticed by every 135-pound fighter. Now Mizugaki is now pushover - he's faced the best of the best in the division, and four out of his five losses since joining the UFC/WEC have either come to champions, ex-champions or former title contenders. That said, Perez doesn't fit that criteria yet, but this could be his coming out party. Perez has put away every opponent he's faced thus far in his UFC career, but he's been off since December 2012, so he might be a little slow coming out of the gate. Still, Perez is a name to watch in title contention in the next year and this will be a great test to see exactly where he stands.