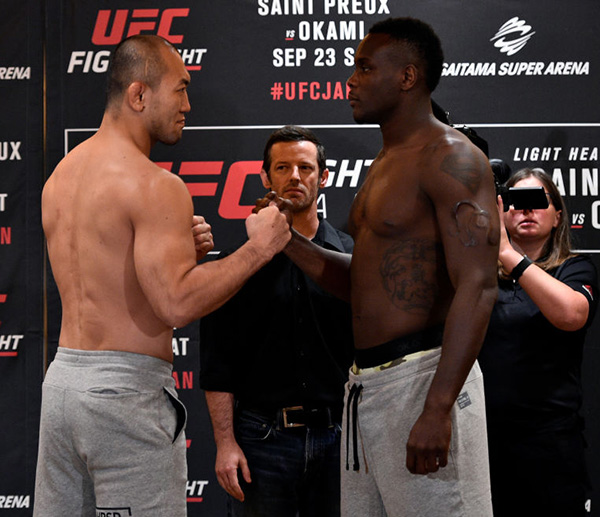 OVINCE SAINT PREUX VS YUSHIN OKAMI
Yushin Okami stunned many in the fight world when he agreed to face Ovince Saint Preux on short notice after “Shogun” Rua was forced out of Friday’s main event due to injury. But is it that surprising? Okami is on a four-fight winning streak, he’s 17-1 at home in Japan and he didn’t have to go through a miserable weight cut. He already knows how to fight, and if he can upset Saint Preux, he’s off to a nice start in his second UFC run. He loses, and he goes back to 170 pounds and starts fresh there. And luckily for him, he’s got the kind of swarming style that can take away some of OSP’s best weapons. Over five rounds, if Okami can make it a war of attrition, then anything can happen. 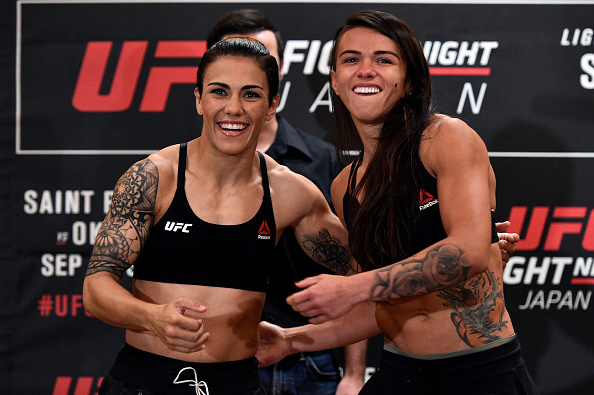 The most intriguing matchup on Friday’s card is clearly the co-main event between Claudia Gadelha and Jessica Andrade. Both top contenders at 115 pounds, Gadelha and Andrade both want to get back to a world title fight, and this is the kind of fight that can get the winner there. Gadelha looked better than ever in her win over Karolina Kowalkiewicz, and Andrade has been wrecking her opposition since moving from the bantamweight division. This is a tough one to pick, but the one guarantee is that it should be compelling viewing from start to finish.

TAKANORI GOMI VS DONG HYUN KIM
The last few years have not been kind to Japanese MMA icon Takanori Gomi. Winless in four fights since his last victory against Isaac Vallie-Flagg in 2014, Gomi’s best chance of breaking that streak may come against “Maestro” Dong Hyun Kim, simply because Kim is not afraid of putting game plans to the side and getting into a fight. And in a slugfest, Gomi still has that “Fireball Kid” power, so if he can get a few shots in and not have to worry about a takedown or submission, we might just see the roof lift off at Saitama Super Arena. 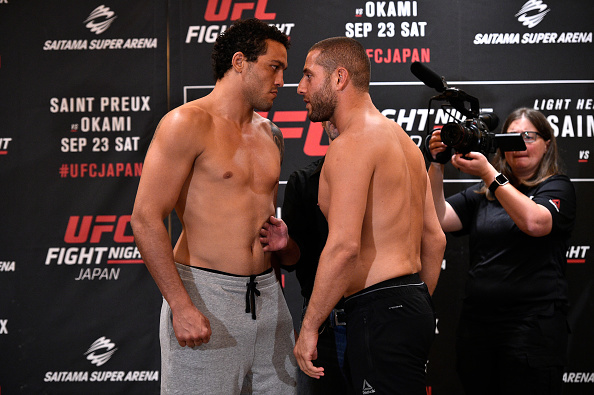 Perhaps the most highly anticipated UFC debut in a long time is that of kickboxing superstar Gokhan Saki. Saki is an intense competitor whose striking prowess is on another level, which should make the prospect of him hitting someone with four-ounce gloves frightening to anyone at 205 pounds in the UFC. But, of course, everyone wonders what will happen if and when he gets taken down. That has to be Henrique da Silva’s game plan on Friday, but if he can’t get the man once dubbed “The Turkish Tyson” to the mat, fireworks are expected to commence.

TERUTO ISHIHARA VS ROLANDO DY
Back in Japan for the first time since 2015, Teruto Ishihara finds himself at a pivotal point in his UFC run after losing back-to-back fights to Artem Lobov and Gray Maynard. Is the Philippines’ Rolando Dy the type of style matchup “Yashabo” needs to get back on track? On paper, yes. But Ishihara is looking for a return to highlight-reel form, and for that, he’ll have to let his hands go and take some risks, which could be dangerous against the hard-hitting Dy. 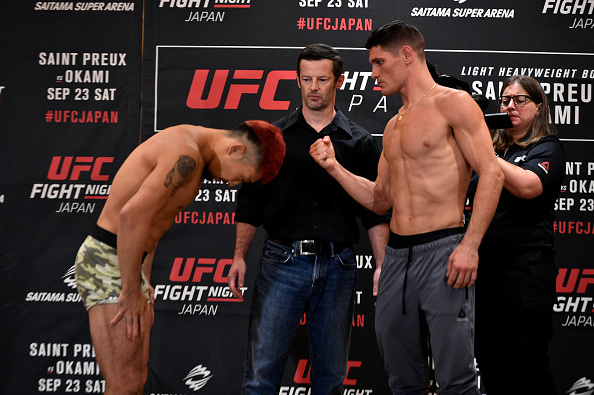 After missing weight by a whopping four pounds, Mizuto Hirota will likely be looking to do one of two things: use his size to wear out Charles Rosa, or go after the finish early because there won’t be enough gas in the tank to go three hard rounds with the Boston native. I tend to go with the latter option, and if that’s the case, expect Rosa to eagerly trade with Hirota for five minutes before then taking the Japanese veteran into deep waters in the next round before going for a finish. It should be a good one while it lasts, though.

KEITA NAKAMURA VS ALEX MORONO
Keita Nakamura is one of those guys that will probably never see any mainstream light outside of his native Japan, and that’s unfortunate because he is an honest fighter with a style that can give any opponent at 170 pounds trouble. And if he gets your back, 15 wins by rear naked choke submission tell that tale. So he’s got the experience and skill to turn back up and comer Alex Morono, but the Texan looks like he’s got the goods to make some noise in this division, and Friday night would be a good time for him to deliver the kind of statement he needs to keep moving up the ladder. 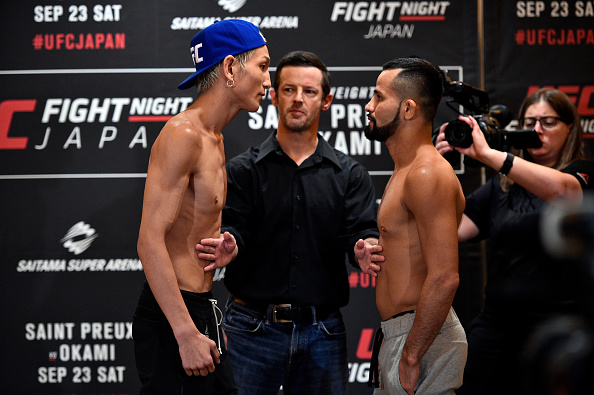 After an erratic start to his UFC career, Ulka Sasaki appeared to finally put everything together when he scored a Performance of the Night submission over Justin Scoggins in June. If he has turned the corner and is ready for the big guns at 125 pounds, then he has the perfect opportunity to show it when he faces perennial contender Jussier Formiga. Formiga has long been one of the top flyweights in the world, but he needs to be more consistent. Friday night can help him get back into the title race.

SYURI KONDO VS CHANMI JEON
Making her first UFC appearance, former pro wrestler and kickboxer Syuri Kondo puts her perfect pro MMA record on the line against the youngest fighter in the UFC, 20-year-old Chanmi Jeon. With Kondo at 5-0 and Jeon at 5-1, it looks like a clash of fairly inexperienced fighters, but with Jeon’s Muay Thai background and Kondo’s kickboxing background, the ladies may surprise with a standup battle that has Fight of the Night potential. 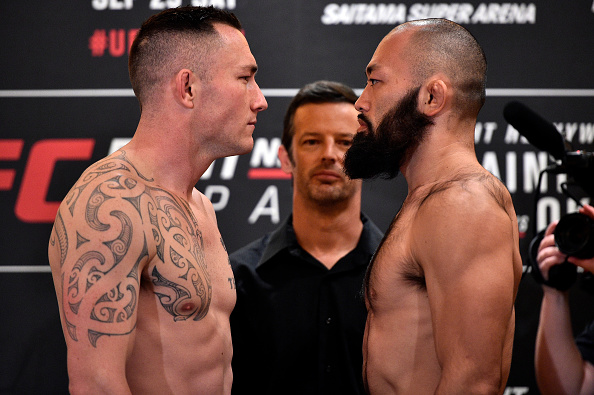 During his UFC run, Shinsho Anzai has looked like a fighter who can be a fan favorite both in Japan and abroad, but unfortunately, he’s only fought twice since his Octagon debut in 2014. Friday, he returns for the first time since 2015, and he’s got a difficult task ahead of him in New Zealand prospect Luke Jumeau, who brings a seven-fight winning streak into their bout.

DAICHI ABE VS HYUN GYU LIM
On paper, you may wonder how Daichi Abe will fare in his UFC debut against Hyun Gyu Lim after just five pro fights. But Abe looks like the real deal, fights like the real deal, and the UFC matchmaking team wouldn’t have put him on this card if they didn’t think he could handle himself in the Octagon. That being said, Lim is a tough out who throws hammers, so he will be the ultimate judge of whether Abe is ready for prime time or not.