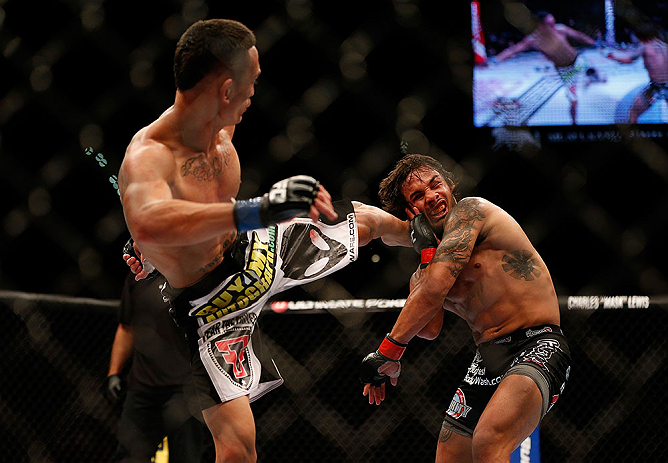 The UFC is shipping up to Boston this Saturday night for a stacked card taking place in the boss Dana White's hometown, where they will help kick off the first day of FOX Sports 1 with a huge card that will garner six hours of coverage on the new network.

In part one of our fantasy preview, we took a look at four of the biggest main card matchups, including the main event pitting Chael Sonnen against Mauricio "Shogun" Rua.

Today, we'll dig a little deeper into the undercard, where hometown boy Joe Lauzon looks to add yet another bonus to his already record-setting accomplishment, while Irish fighter Conor McGregor hopes to put on another stellar performance to match his debut, where he blasted onto the scene with a 67 second knockout.

Who are the favorites worth following and which underdogs might just be able to pull off the upset? Read ahead and find out.

1)    It's hard to imagine Joe Lauzon losing in his hometown, much less just a week after he found out he was going to be a daddy for the first time. Yep, that's right, there's another Lauzon coming into the world, and Joe is fighting for even more now than he was when he was representing Boston on the card that was also the first UFC show in the city back in 2010 for UFC 118. On that night, Lauzon made short work of Gabe Ruediger, and while he still claims that the crowd didn't affect him that night, it's hard to ignore when more than 15,000 home fans are all screaming and cheering your name. Beyond the energy Lauzon will get from the Boston faithful, he's also a crafty, dangerous fighter who feasts on non-top ten opponents. He's coming in as a -260 favorite, while his opponent Michael Johnson comes back at +185, but this is one underdog to avoid. Lauzon is a killer with more finishes in the lightweight division than any fighter in history, and he does it with a touch of flair. He's racked up 12 post fight bonuses, tied for the most in company history, and he'll look to add No. 13 this weekend. Johnson has also been susceptible to submissions, with two of his losses in the UFC coming by way of tap out, and Lauzon will be targeting every limb during every second of the fight. Lauzon is a fast starter, and if he can get Johnson down before the fighters develop any kind of sweat, this one could be over in a hurry.

2)    You've got to love a fighter willing to step up into a tough fight just for the chance to fight in his hometown, and that's what John Howard did when he took the fight at UFC Fight Night against Ultimate Fighter 17 finalist Uriah Hall. The end result may not be the kind of homecoming that Howard wanted unfortunately. Howard is a former welterweight who went back up to middleweight as soon as he exited the UFC back in 2011. Since then, Howard has gone 6-1 overall, but he asn't faced a fighter like Hall during that time. Beyond Hall's flashy knockouts on the reality show, he's also picked up his training quite a bit since learning under the tutelage of Chael Sonnen for several weeks. Hall has also relocated his training camp to southern California, where he began working at the Reign Training Center under head coach Mark Munoz, as well as picking up some time with UFC women's bantamweight champion Ronda Rousey. Hall was quite visibly overwhelmed after TUF, when the entire world wanted to anoint him as the next Anderson Silva, but now with a few months of perspective, some new training, and a renewed vigor, he should be ready to throw down with Howard in this fight. Hall is devastating on the feet, with an arsenal that rivals Neo in The Matrix, and he's a legit middleweight that will give Howard serious issues. Howard is game and he's got a lot on the line given how hard he had to fight to get back into the UFC, but Saturday won't be his night. Hall should get back to form and ignite the crowd with one of his signature finishes.

3)    Conor McGregor might just be the most talked about UFC fighter in history with only one fight on his Octagon record, but the reality is that this kid is good. McGregor mixes a foundation in boxing with great footwork and movement, while employing a fast front kick that keeps his opponents off balance. McGregor has a ground game, but he's not likely to show it off this time facing another striker in Max Holloway. While McGregor's attack will mostly come from his hands, Holloway mixes it up with a quick kick array that can catch an opponent off guard if they're not careful. What this fight comes down to is McGregor being able to handle the spotlight, and if he can, he should be able to outpoint and out maneuver Holloway for the better part of all 15 minutes. McGregor enters the fight as a massive favorite with -265 odds in his favor with Holloway as the dog at +210. Those numbers may be a bit off given Holloway's experience edge in the Octagon, and his willingness to show no fear in the face of tough opposition. McGregor is the pick, however, but he may have to battle for all 15 minutes to get there.

4)    Former Ultimate Fighter winner Diego Brandao will look for his third win in a row this weekend when he faces Daniel Pineda. Brandao has rapidly improved over his last couple of fights, showing just how much UFC experience can pay off. When he was on the reality show, Brandao was a wild striker, with nasty power in his hands that he used to simply overwhelm the competition. He found out quickly that plan doesn't always work in the UFC, but in his last couple of matchups, Brandao has shown patience and an excellent submission game. Pineda also likes to look for submissions, but that could play perfectly into Brandao's hand. He lands takedowns at 80 percent accuracy, so if he wants to get Pineda down, he'll have a pretty good shot of doing so. Brandao is a featherweight fighter to keep an eye on in 2013 and 2014, so expect him to keep his win streak alive with another one on Saturday night.